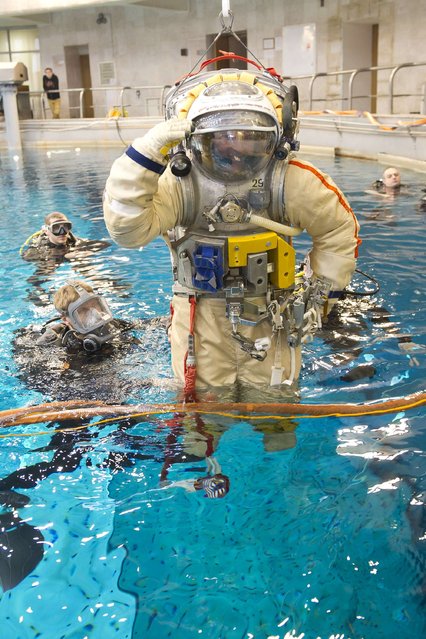 Russian cosmonaut Alexander Samoukutyaev prepares to immerse in a swimming pool in a spacesuit as part of a training session at the Russian cosmonaut training facility in Star City outside Moscow February 13, 2013. Samoukutyaev, together with U.S. astronaut Barry Wilmore and Russian cosmonaut Elena Serova, is preparing for a mission to the International Space Station in October 2014. (Photo by Sergei Remezov/Reuters) 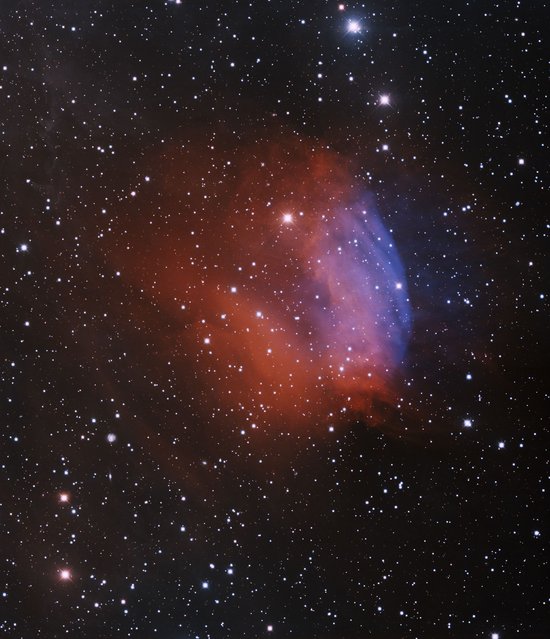 This National Optical Astronomy Observatory (NOAO) image of the Planetary Nebula Sh2-174, which may suggest a rose to some, was obtained with Mosaic 1 camera on the Mayall 4-meter telescope at Kitt Peak National Observatory in Tucson, Arizona January 8, 2013. A planetary nebula is created when a low-mass star blows off its outer layers at the end of its life. The core of the star remains and is called a white dwarf. Photo was captured January 8, 2013. (Photo by T.A. Rector (University of Alaska Anchorage) and H. Schweiker/NASA/Reuters) 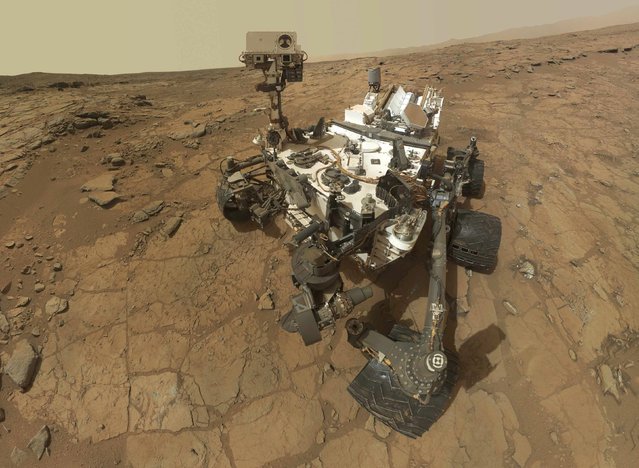 Self-portrait of the rover Curiosity, combining dozens of exposures taken by the rover's Mars Hand Lens Imager (MAHLI) during the 177th Martian day, or sol, is seen in this February 3, 2013 handout image courtesy of NASA. The rover is positioned at a patch of flat outcrop called “John Klein”, which was selected as the site for the first rock-drilling activities by Curiosity. The rover's robotic arm is not visible in the mosaic. (Photo by NASA/Reuters/JPL-Caltech/MSSS/Handout) 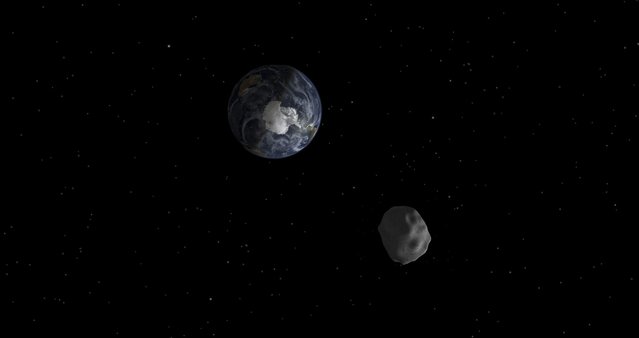 The passage of asteroid 2012 DA14 through the Earth-moon system, is depicted in this handout image from NASA. On February 15, 2013, an asteroid, 150 feet (45 meters) in diameter will pass close, but safely, by Earth. The flyby creates a unique opportunity for researchers to observe and learn more about asteroids. (Photo by NASA/Reuters/JPL-Caltech/Handout) 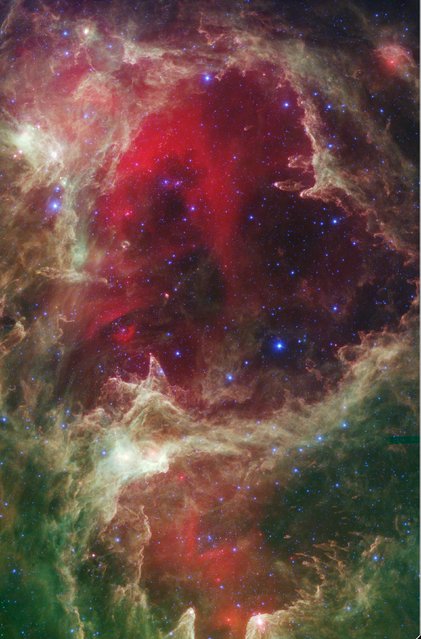 An infrared portrait from NASA's Spitzer Space Telescope which shows generations of stars is seen in this undated NASA handout image released February 14, 2013. In this wispy star-forming region, called W5, the oldest stars can be seen as blue dots in the centers of the two hollow cavities (other blue dots are background and foreground stars not associated with the region). Red shows heated dust that pervades the region's cavities, while green highlights dense clouds. (Photo by NASA/Reuters/JPL-Caltech/Harvard-Smithsonian/Handout) 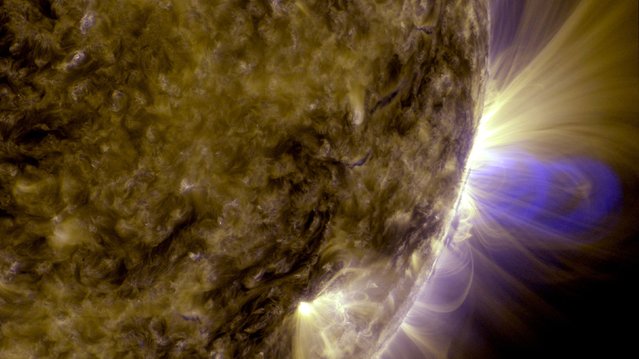 Magnetic loops on the sun are seen in this NASA handout image captured by NASA's Solar Dynamics Observatory (SDO) on July 19, 2012 and released February 15, 2013. A series of loops such as this is known as a flux rope, and these lie at the heart of eruptions on the sun known as coronal mass ejections (CMEs.) (Photo by NASA/Reuters/Goddard Space Flight Center/SDO/Handout)

Planes are silhouetted against the rising moon in Phoenix, February 25 and 24, 2013. (Photo by Charlie Riedel/Associated Press) 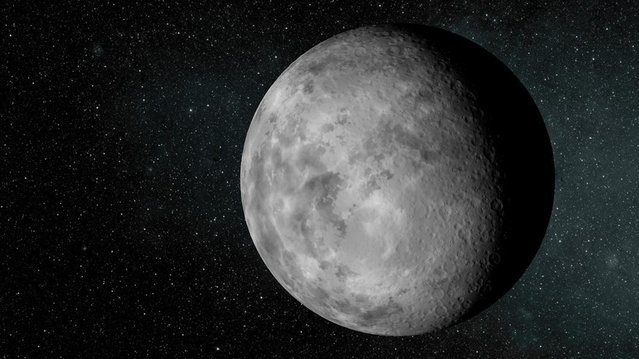 An artist's conception of the tiny new planet Kepler-37b, which is slightly larger than Earth's moon and orbits its host star every 13 days, in this image released by NASA, February 20, 2013. It likely has a surface temperature of in excess of 400C (700F). Astronomers don't think the tiny planet has an atmosphere or could support life as we know it, but the moon-size world is almost certainly rocky in composition. (Photo by NASA/Reuters/Ames/JPL-Caltech/Handout) 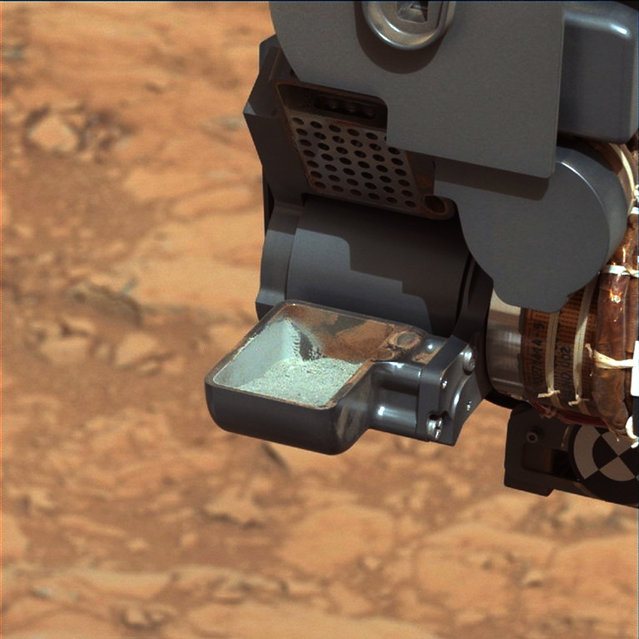 The first sample of powdered rock from Mars extracted by the NASA's Curiosity rover drill is pictured in this February 20, 2013 NASA handout photo. The image was taken after the sample was transferred from the drill to the rover's scoop. The scoop is 1.8 inches (4.5 centimeters) wide. The image has been white-balanced by NASA to show what the sample would look like if it were on Earth. (Photo by NASA/Reuters/JPL-Caltech/MSSS/Handout) 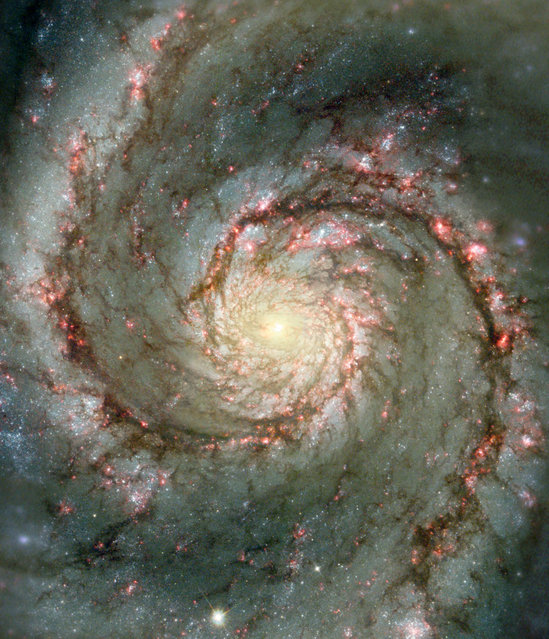 The Whirlpool Galaxy, a classic spiral galaxy, is pictured in this NASA handout photo. At only 30 million light years distant and fully 60 thousand light years across, M51, also known as NGC 5194, is one of the brightest and most picturesque galaxies on the sky. This image is a digital combination of a ground-based image from the 0.9-meter telescope at Kitt Peak National Observatory and a space-based image from the Hubble Space Telescope highlighting sharp features normally too red to be seen. (Photo by NASA) This NASA Chandra X-Ray Observatory image shows a highly distorted supernova remnant that may contain the most recent black hole formed in the Milky Way galaxy. The composite image combines X-rays from Chandra (blue and green), radio data from the Very Large Array (pink), and infrared data from the Palomar Observatory (yellow). Most supernova explosions that destroy massive stars are generally symmetrical. In the W49B supernova, however, it appears that the material near its poles was ejected at much higher speeds than that at its equator. There is also evidence that the explosion that produced W49B left behind a black hole and not a neutron star like most other supernovas. (Photo by L. Lopez/MIT/CXC/NASA via AFP Photo) 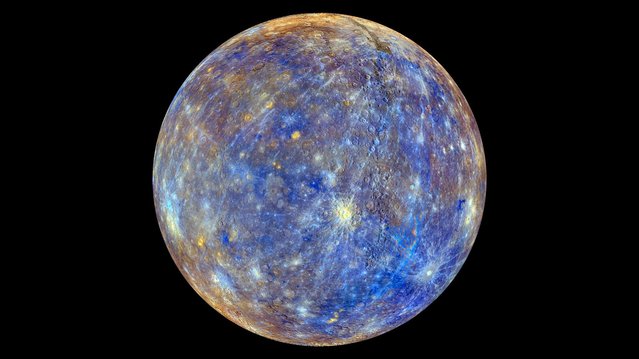 The planet Mercury takes on exaggerated hues in this NASA photo, released February 22, 2013. The false-color picture was produced using data from the Messenger mission's color base map imaging campaign. The colors enhance the chemical, mineralogical and physical differences in the rocks that make up Mercury's surface. (Photo by Johns Hopkins University Applied Physics Laboratory/Carnegie Institution of Washington via Reuters) 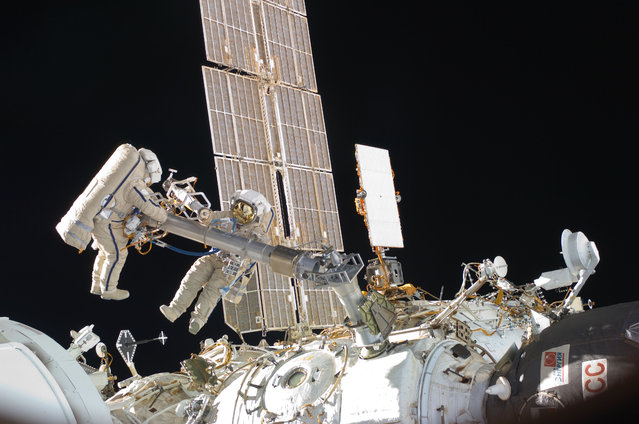 Russian spacewalkers Oleg Kononenko, left, and Anton Shkaplerov work on the exterior of the International Space Station on February 16, 2013. (Photo by NASA via AFP Photo) 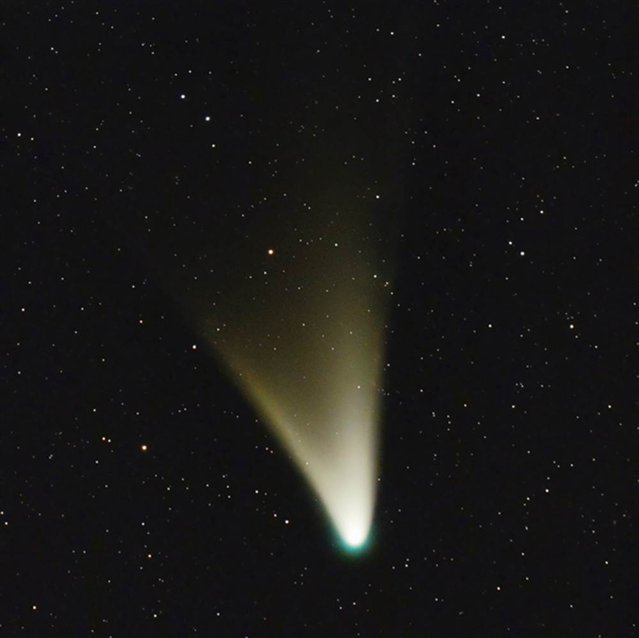 Comet PanSTARRS glows with a fanlike tail in this image captured by Argentine astrophotographer Ignacio Diaz Bobillo on February 15, 2013. The comet is expected to reach naked-eye visibility in the Northern Hemisphere in early March. (Photo by Ignacio Diaz Bobillo/Pampaskies.com) 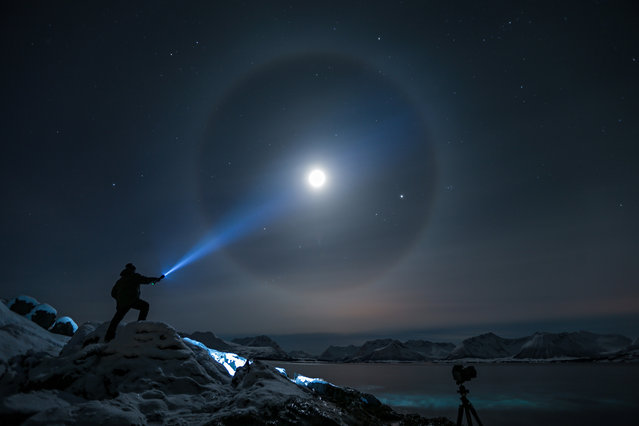 A halo appears around the moon in Kvæfjord, Troms, Norway, on February 19, 2013. Such halos occur when moonlight is refracted by ice crystals in the atmosphere. (Photo by Steve Nilsen/Andre Sørensen) 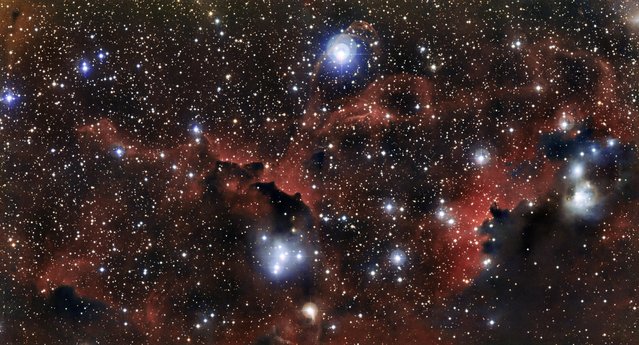 An image from the European Southern Observatory, released February 4, 2013, shows the intricate structure of part of the Seagull Nebula, also known as IC 2177. These wisps of gas and dust form part of the “wings” of the celestial bird. This new view of the region was captured by the Wide Field Imager on the MPG/ESO 2.2-meter telescope at the ESO's La Silla Observatory in Chile. (Photo by ESO via AFP Photo) 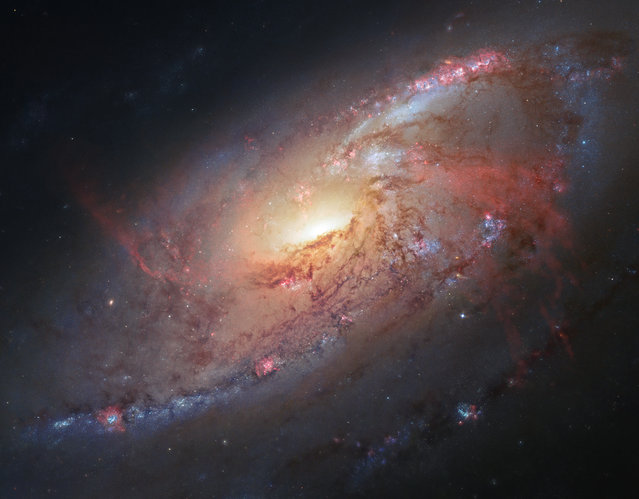