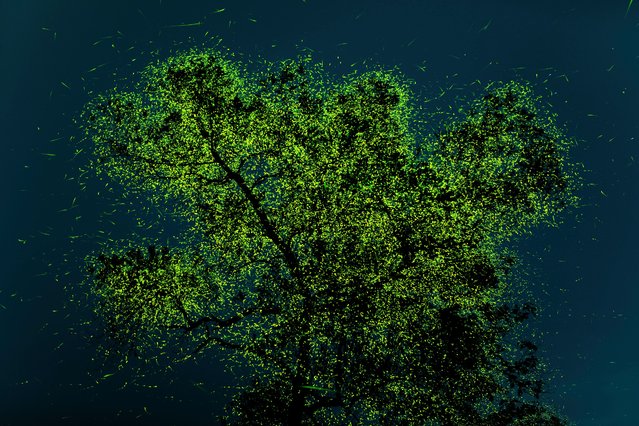 People’s choice award: Prathamesh Ghadekar, India. Just before monsoon, fireflies congregate in certain regions of India. Sometimes milllions of these insects can be found on a few special trees like this one. Thirty-two photographs of this tree were taken and later stacked in Adobe Photoshop, creating this image. (Photo by Prathamesh Ghadekar/TNC Photo Contest 2021) 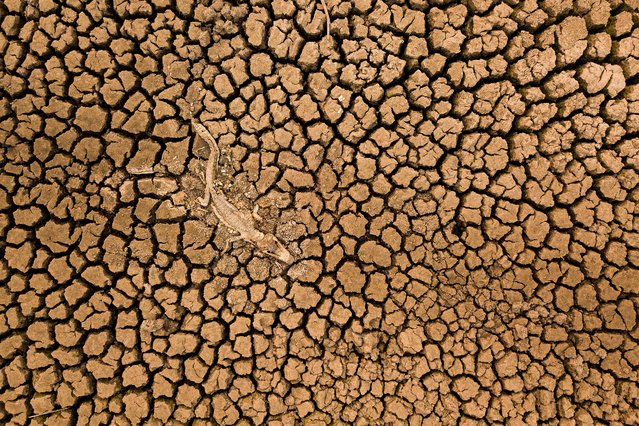 Landscape first place: Daniel De Granville Manço, Brazil. The carcass of a Pantanal alligator in the dry soil on the banks of the Transpantaneira highway, municipality of Poconé (Mato Grosso). The photo was taken with a drone on 4 October 2020, at the height of the droughts that hit the Pantanal that year. (Photo by Daniel De Granville Manço/TNC Photo Contest 2021) 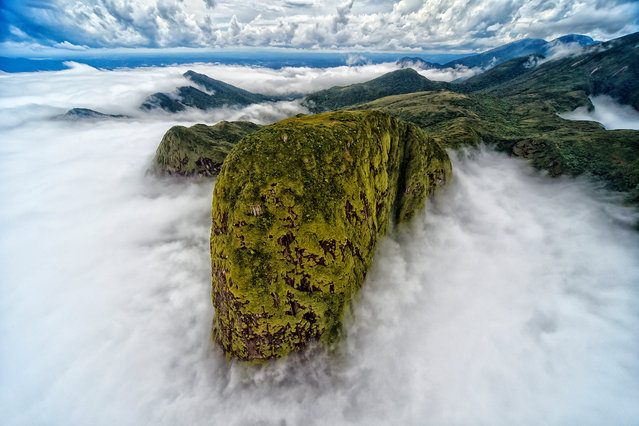 Landscape second place: Denis Ferreira Netto, Brazil. “In a helicopter flight through the sea mountain range, I came across this white cloud cover, which resulted in this magnificent image that resembles the head of a dinosaur”, the photographer said. (Photo by Denis Ferreira Netto/TNC Photo Contest 2021) 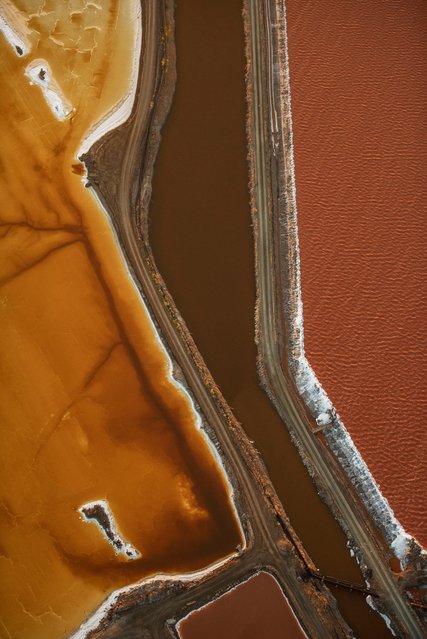 Landscape third place: Jassen Todorov, US. “If you have flown into San Francisco international airport, you may have seen these colourful salt ponds over the bay”, Todorov said. “I have photographed them numerous times, as the colours and patterns constantly change thanks to microorganisms and salinity. This aerial image was taken while flying my plane”. (Photo by Jassen Todorov/TNC Photo Contest 2021) 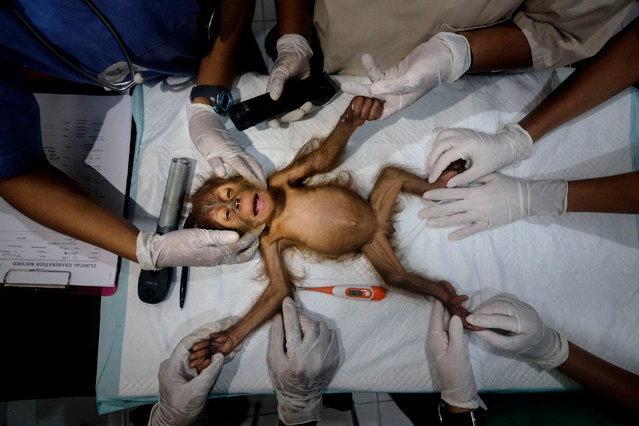 People and nature first place: Alain Schroeder, Belgium. Orangutans in Indonesia are under threat from the ongoing depletion of the rainforest due to palm oil plantations, logging, mining, hunting. This photograph shows a team of rescue workers preparing Brenda, a female orangutan who is estimated to be three months old as she still has no teeth, for surgery. (Photo by Alain Schroeder/TNC Photo Contest 2021) 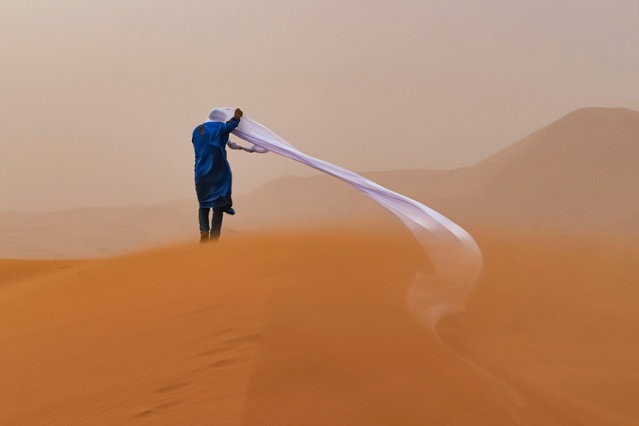 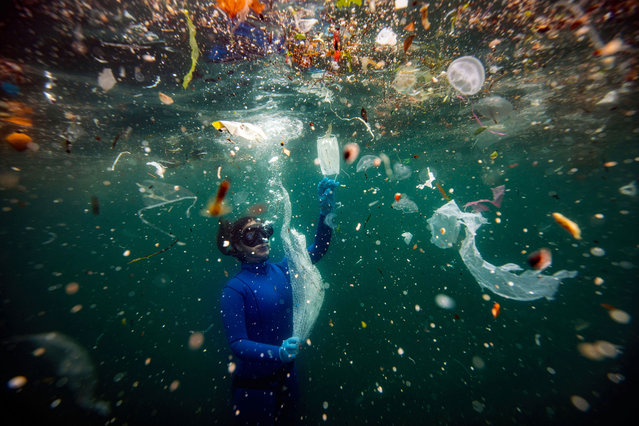 People and nature third place: Şebnem Coşkun, Turkey. “Covid-19 wastes” are a new danger to aquatic life. According to a World Wildlife Fund report, an equivalent to 33,880 plastic bottles is being mixed into the Mediterranean Sea per minute, with waste washing up on the shores of Italy and Turkey. (Photo by Şebnem Coşkun/TNC Photo Contest 2021) 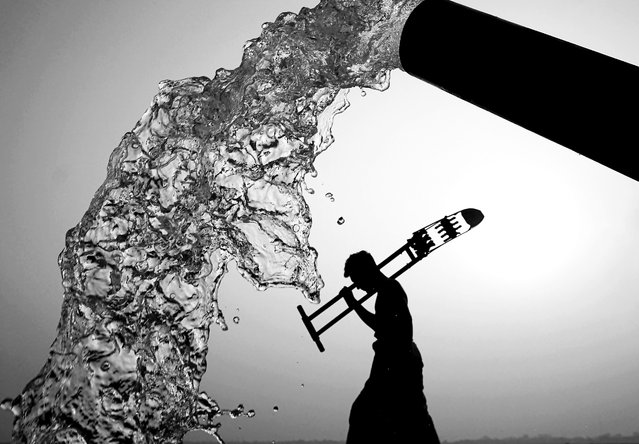 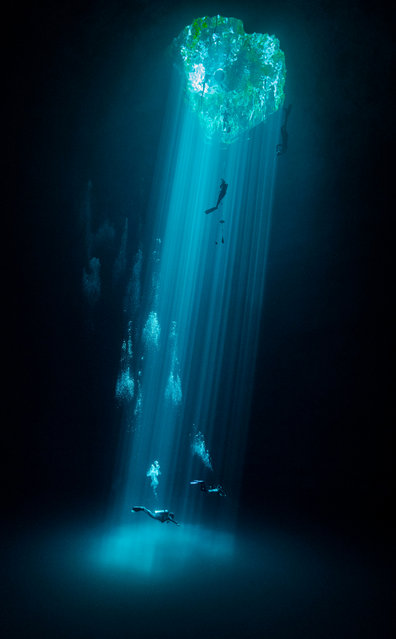 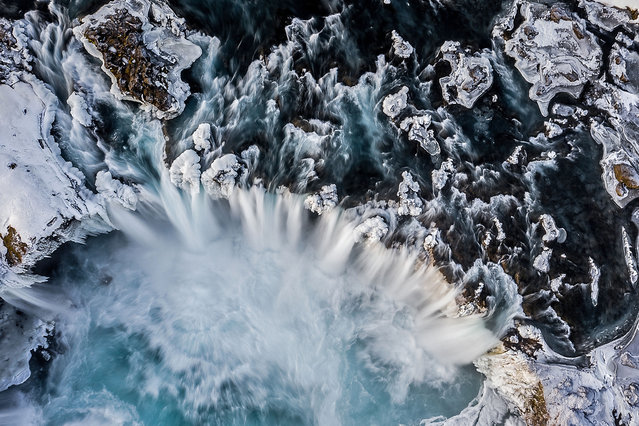 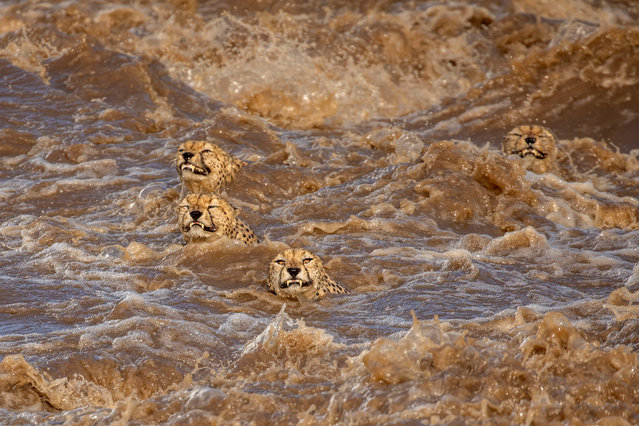 Wildlife first place: Buddhilini de Soyza, Australia. Incessant rains in the Masai Mara national reserve in Kenya have caused the the Talek river to flood. This group of five male cheetahs, who received the nickname “Tano Bora” ( the fast five), were looking to cross this river in terrifyingly powerful currents. “It seemed a task doomed to failure and we were delighted when they made it to the other side”, De Soyza said. “This was a timely reminder of the damage wreaked by human induced climate change”. (Photo by Buddhilini de Soyza/TNC Photo Contest 2021) 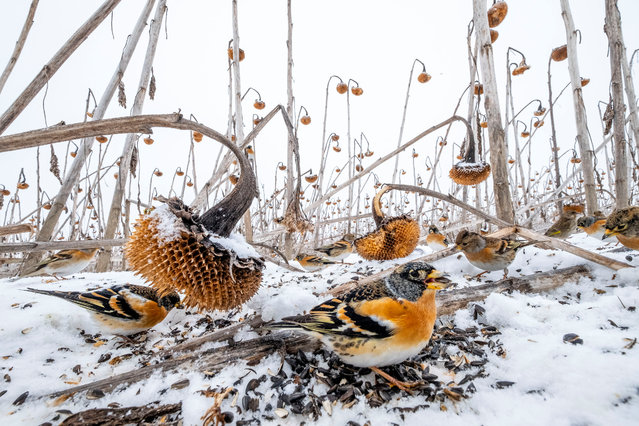 Wildlife second place: Mateusz Piesiak, Poland. A large sunflower field, which could not be mowed this year due to the water level, attracted thousands of bird species this winter, mostly greenfinches, goldfinches and bramblings. (Photo by Mateusz Piesiak/TNC Photo Contest 2021) 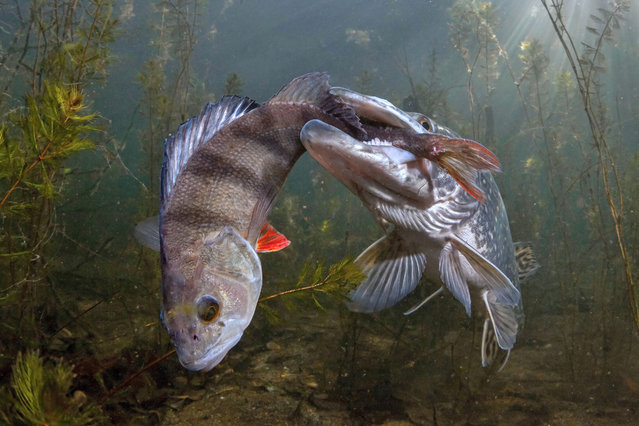 Wildlife third place: Viktor Vrbovský, Czech Republic. A pike tries to eat a large perch. “How did this end? I don’t know. The situation didn’t change much in an hour”, Vrbovsky said. “I had to emerge because I was running out of air”. (Photo by Viktor Vrbovský/TNC Photo Contest 2021) 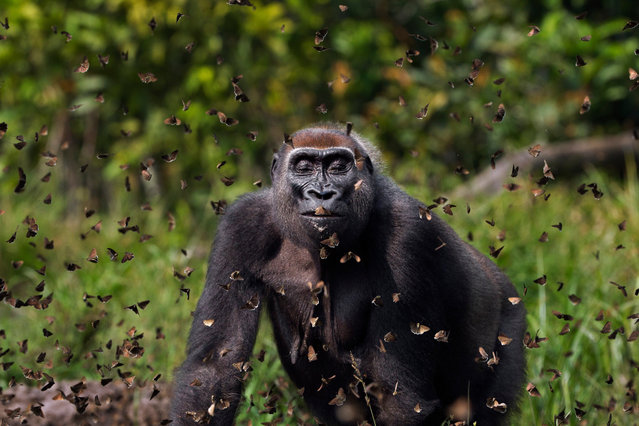