A contestant in a knobbly knees competition at Butlin's Holiday Camp in Filey. (Photo by Bert Hardy/Getty Images). 1953 A female bootblack working in the Strand, London. (Photo by Evening Standard/Getty Images). 1963 Women in Chicago being arrested for wearing one piece bathing suits, without the required leg coverings. (Photo by Topical Press Agency/Getty Images). 1922 Prince Alexis Mdivani (ex-husband of film star Pola Negri) is having a Rolls Royce built for him in England and staff in a Piccadilly showroom are demonstrating various car horns to him over the phone as he is in Paris. He chose the 4-note type being demonstrated. (Photo by J. Gaiger/Topical Press Agency/Getty Images). 20th May 1932 A young owner crouches in one of the stalls during the Pup of the Year dog show at Olympia, London. (Photo by McCarthy/Express/Getty Images). 20th October 1974 Valerie Carton and Patricia Webb are surprised by a revealing gust of wind in the funhouse, at London's Battersea funfair. (Photo by Carl Sutton/Picture Post/Getty Images). 20th June 1953 A Vietnamese child reads a comic bought for him by a Vietnamese soldier. (Photo by John Downing/Express/Getty Images). 1973 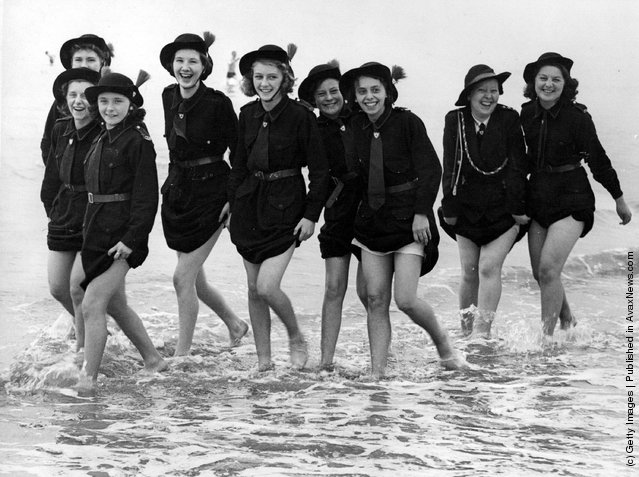 Girls of the 7th Manchester Regiment Church Girls Brigade (Rochdale Battalion) who are in camp at Bridlington, making the most of their holiday by the sea. (Photo by Fox Photos/Getty Images). 25th August 1939 A young Communist wears a Soviet flag at a meeting organised by the Italian Communist Party at the Piazza San Giovanni, in front of the Basilica of St John in Rome, to protest against the current government crisis and political situation. (Photo by Keystone/Getty Images). 24th July 1969 A naked couple look on in amusement as a fully-clothed man turns to stare in disgust at a passing naturist on the beach. (Photo by BIPS/Getty Images). 1959 A woman buys a new pair of nylons from a stocking vending machine or automat in Stockholm, and changes into them in a doorway. (Photo by John Firth/BIPs/Getty Images). May 1956