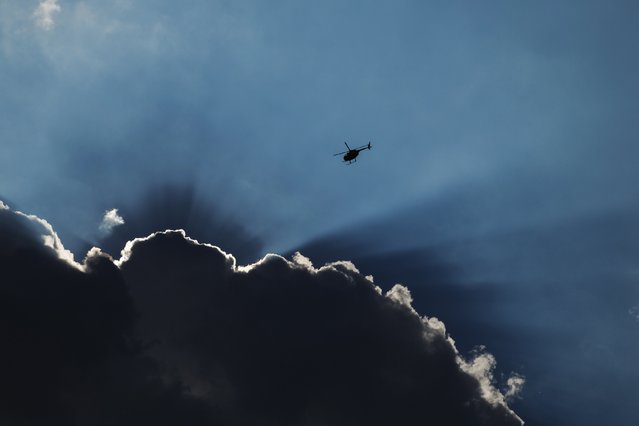 A police helicopter flies overhead as demonstrators take part in a peaceful march in reaction to the shooting of Michael Brown, near Ferguson, Missouri August 18, 2014. (Photo by Lucas Jackson/Reuters) 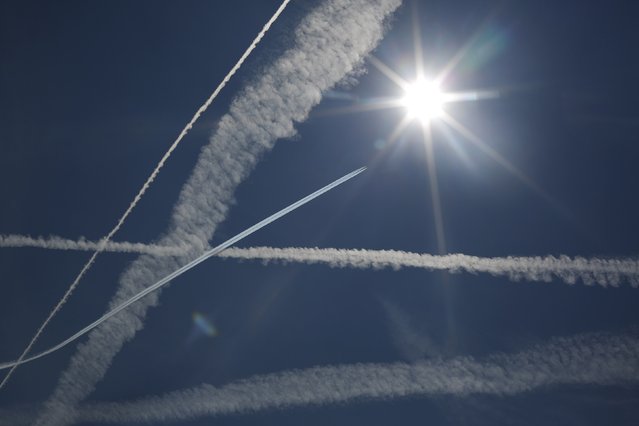 Contrails from passenger planes are seen on the sky over Venice August 25, 2014. (Photo by Tony Gentile/Reuters) 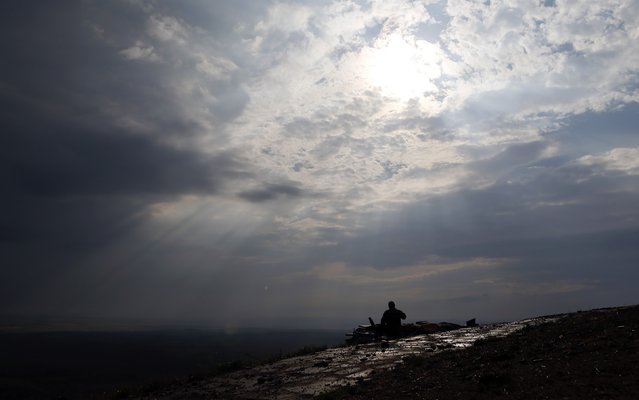 A Pro-Russian separatist guards his position at Savur-Mohyla, a hill east of the city of Donetsk, August 28, 2014. (Photo by Maxim Shemetov/Reuters) 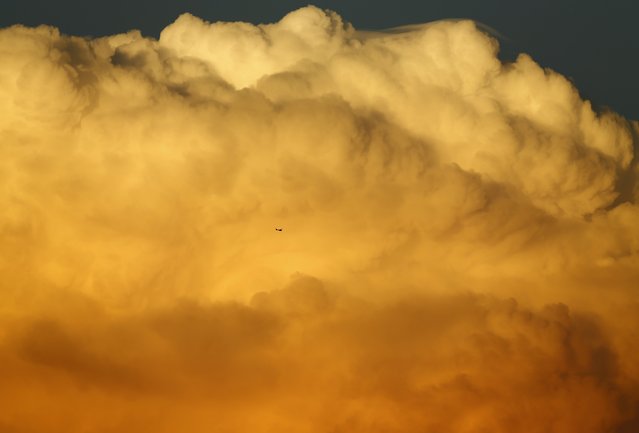 A small aircraft flies past a large emerging thunderstorm during sunset near Encinitas, California September 8, 2014. (Photo by Mike Blake/Reuters) 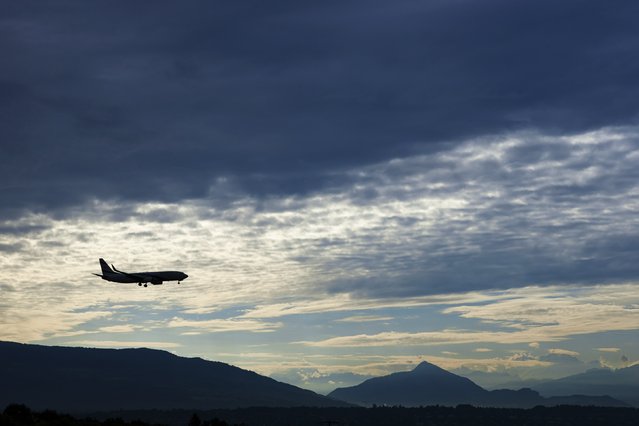 An El Al Airlines aircraft prepares for landing in Cointrin airport during sunrise over the Mont Blanc in Geneva September 9, 2014. (Photo by Denis Balibouse/Reuters) 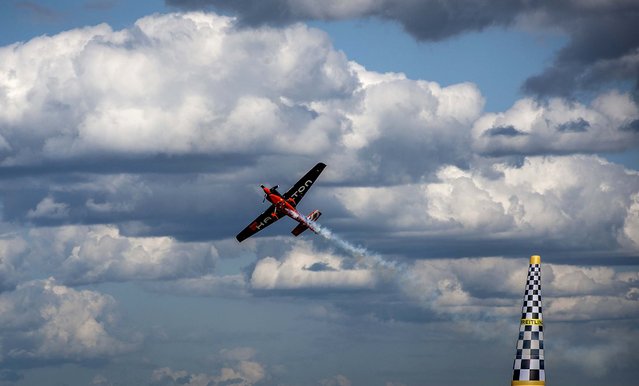 Nicolas Ivanoff of France competes in the final of the Red Bull Air Race in Ascot, England, on August 17, 2014. (Photo by Justin Setterfield/Getty Images) 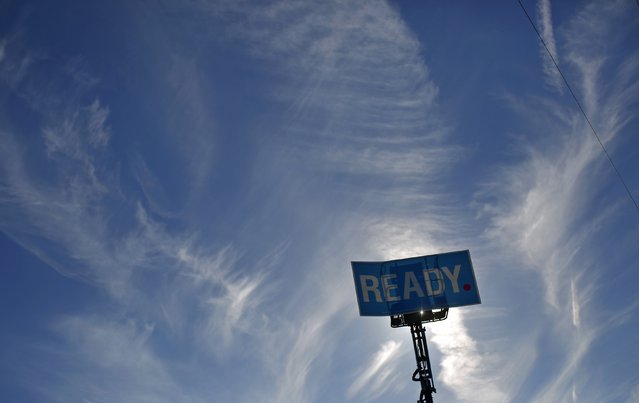 A sign hangs from a crane at the location for Senator Tom Harkin's 37th Steak Fry in Indianola, Iowa, September 13, 2014. Former U.S. Secretary of State Hillary Clinton will attend the event on September 14. (Photo by Jim Youn/Reuters) 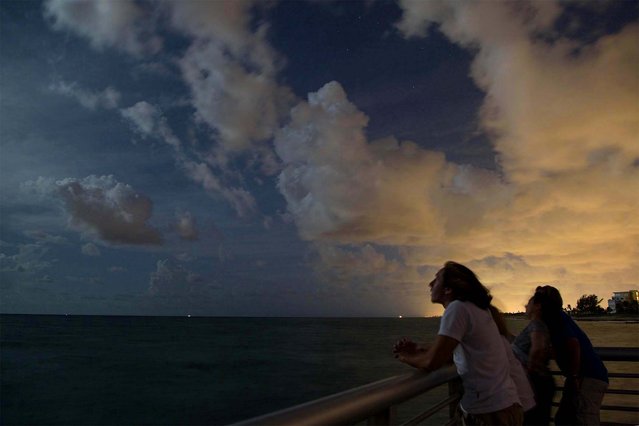 Jonathan Frank, 17, of Lake Worth, is lit by the brightness of the Harvest moon, the third Supermoon of the summer. Frank was at the Boynton Beach inlet with family to remember his uncle, who passed away a few years ago and whose ashes were spread in the ocean. The super moon occurred on his uncle's birthday. (Photo by Allen Eyestone/The Palm Beach Post) 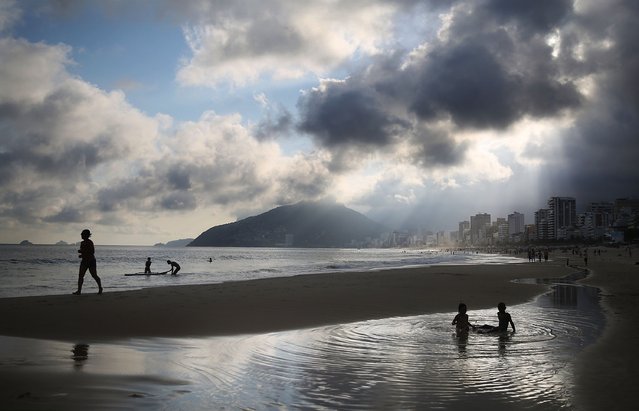 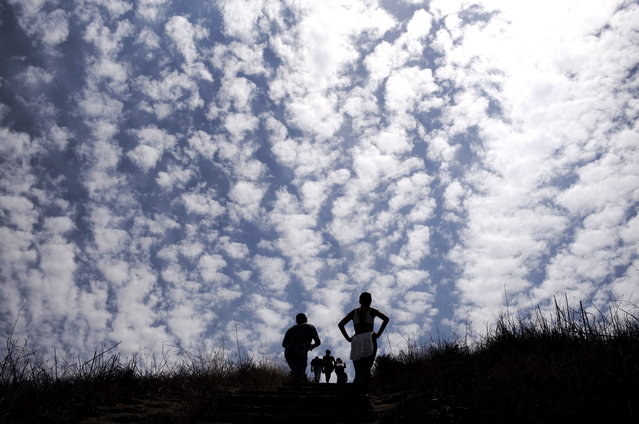 Hikers walk up the Culver City Stairs, an outdoor staircase leading up to the peak of the Baldwin Hills Scenic Overlook State Park, on Tuesday, August 19, 2014, in Culver City, Calif. The 8.5-acre state park is open daily from 8am to sunset. (Photo by Jae C. Hong/AP Photo) 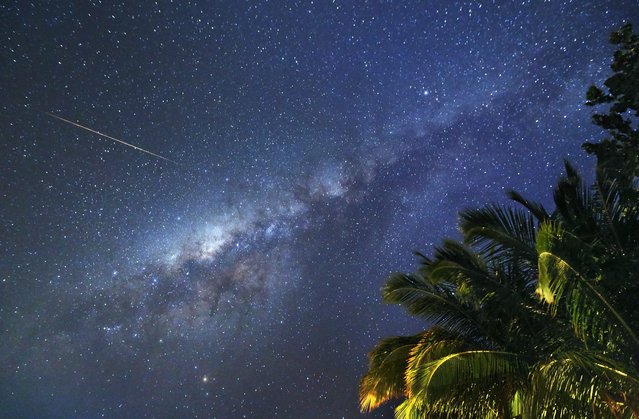 A meteor crosses the Milky Way on the Ari Atoll, Maldives, on the night of 17 August 2014. Ari Atoll (also called Alif or Alufu Atoll) is one of natural atolls of the Maldives. (Photo by Sergey Dolzheko/EPA) 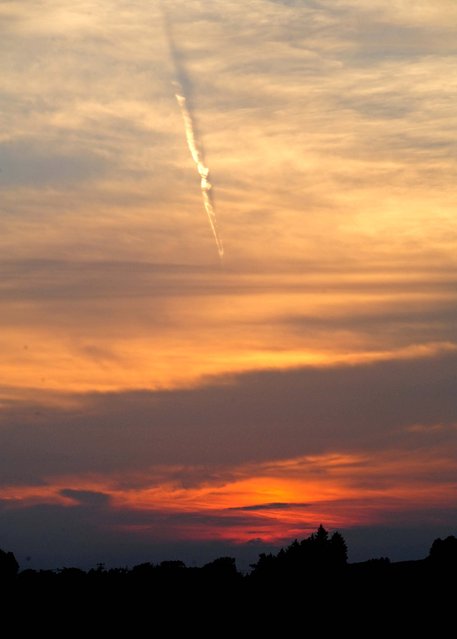 Beautiful colours in the evening sky to the west of Cork city in the current spell of fine weather, on September 9, 2014. (Photo by Denis Minihane/PA Wire) 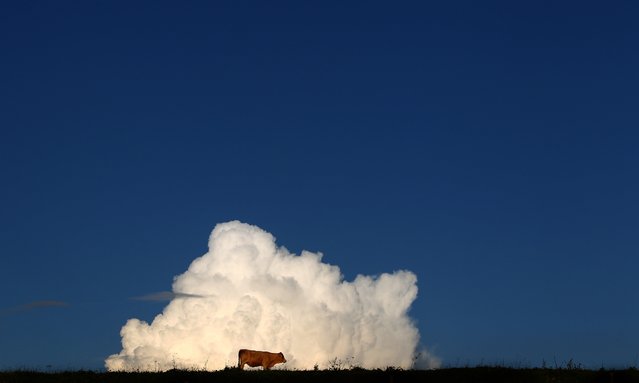 A calf silhouettes against cumulus clouds appearing in the sky behind a meadow in Echerschwang, southern Germany, on September 8, 2014. (Photo by Karl-Josef Hildenbrand/AFP Photo) 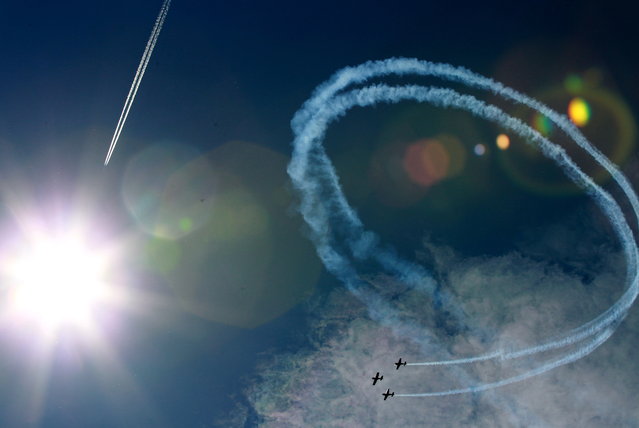 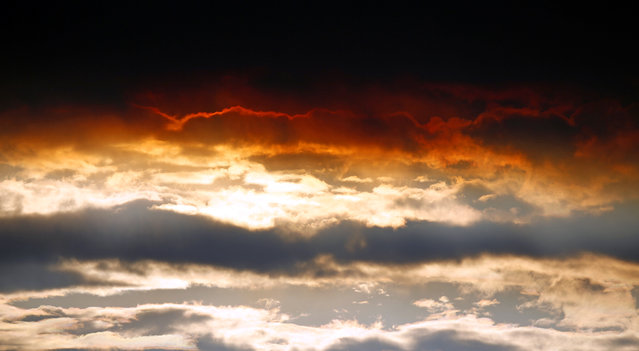 The sky over the site of a lava eruption on Holuhraun, northwest of the Dyngjujoekull glacier in Iceland, Monday, September 1, 2014. Lava fountains danced along a lengthy volcanic fissure near Iceland's subglacial Bardarbunga volcano Sunday, prompting authorities to raise the aviation warning code to the highest level and close the surrounding airspace. The warning was lowered 12 hours later as visibility improved and it was clear that no volcanic ash was detected. (Photo by Eggert Johannesson/AP Photo) 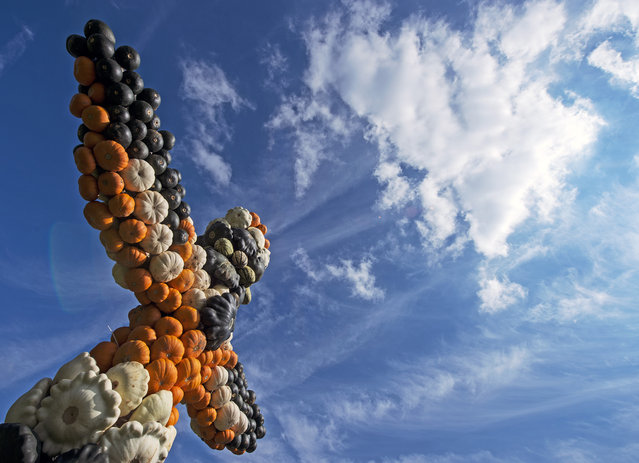 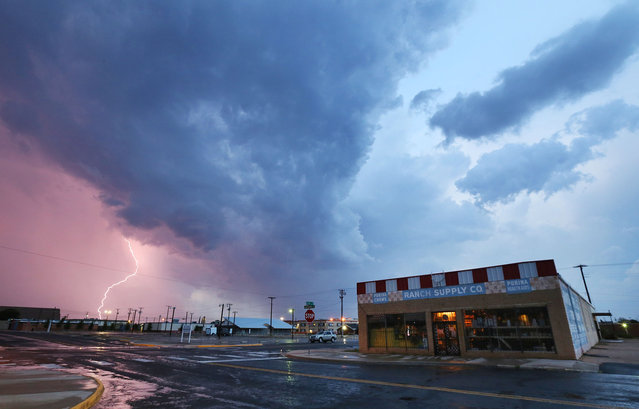 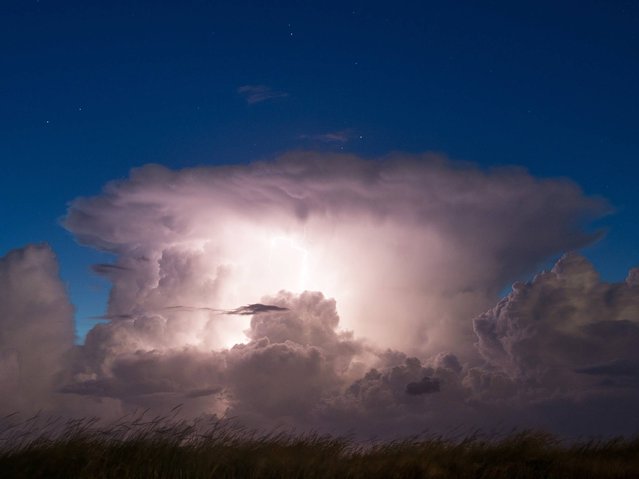 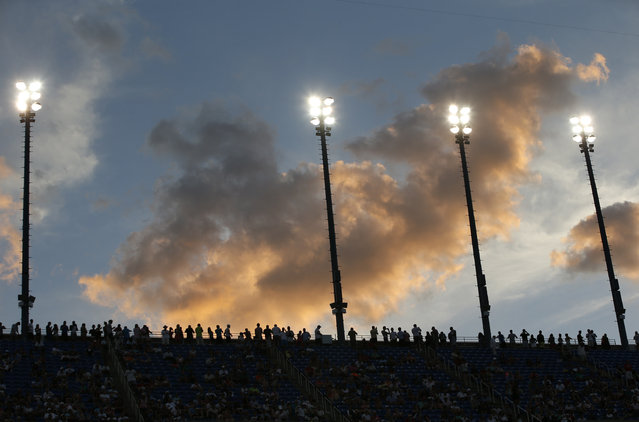 Tennis fans watch as the sun sets during the quarter-final match between Kei Nishikori of Japan and Stan Wawrinka of Switzerland at the 2014 U.S. Open tennis tournament in New York, September 3, 2014. (Photo by Mike Segar/Reuters) 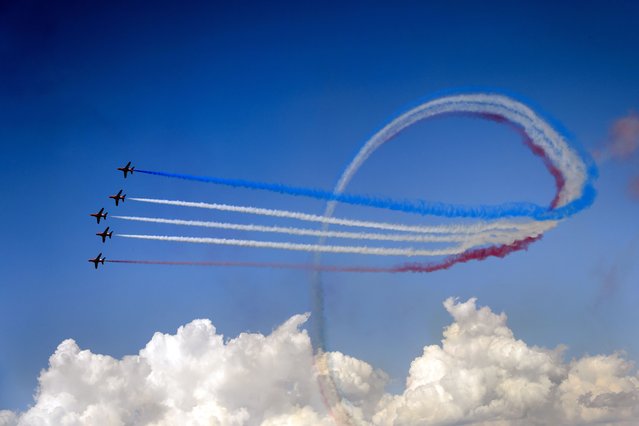