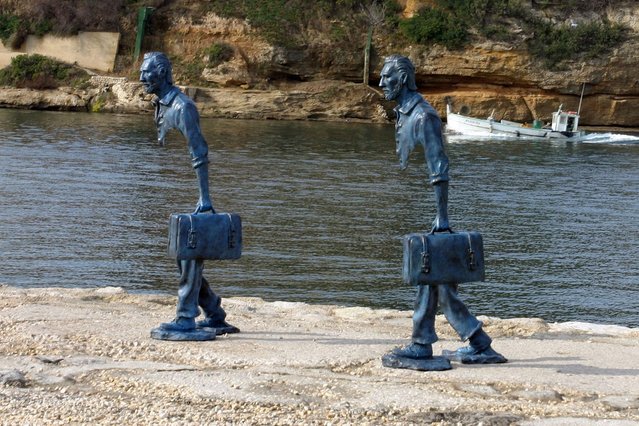 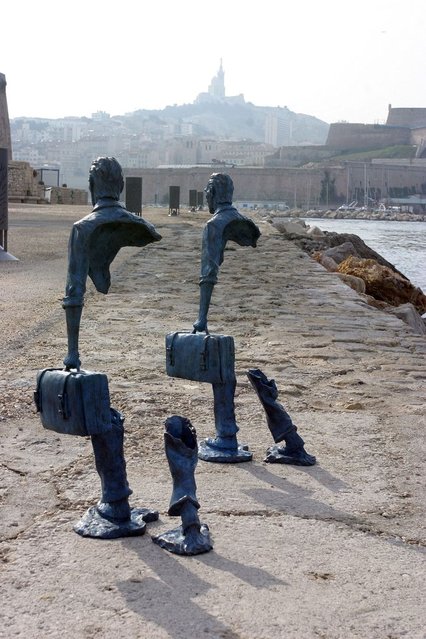 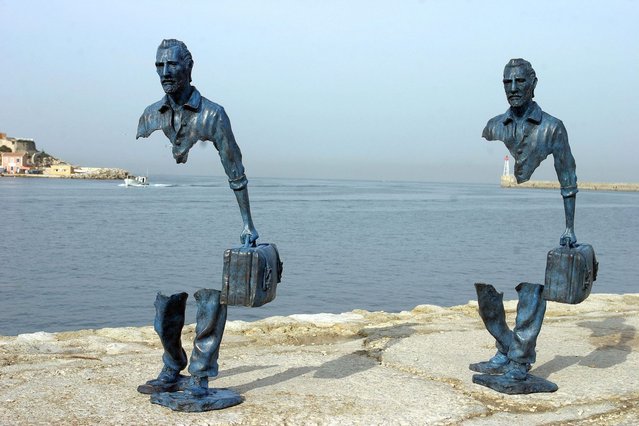 Two sculputures at the waterfront in Marseille – Ever feel like youve forgotten something? No its not a mind trick – these are the amazing photos of sculptures done by a French artist. The sculptures are the work of Bruno Catalano and might look like theyre missing vital organs but the invisible bodies represent a world citizen according to their creator. (Photo by Caters News Agency) 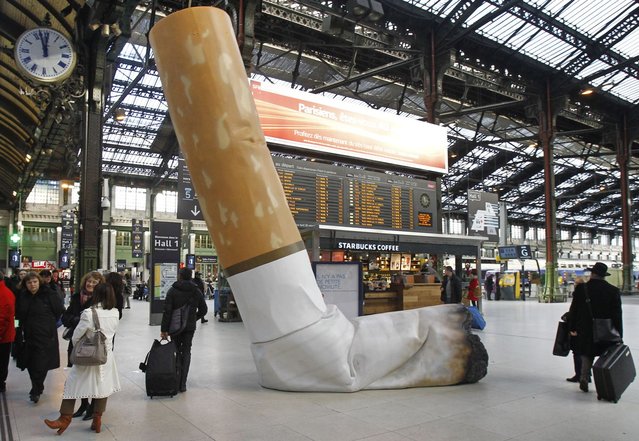 A symbolic cigarette butt is set up inside Gare de Lyon railway station, in Paris, Tuesday December 4, 2012, as part of a publicity campaign against rudeness, by Paris's public transport authority. The possibility of apparent rudeness is being counteracted by an advertising campaign as tourism companies and the Paris transport authority address concerns of tourists during the financial crisis. (Photo by Remy de la Mauviniere/AP Photo) 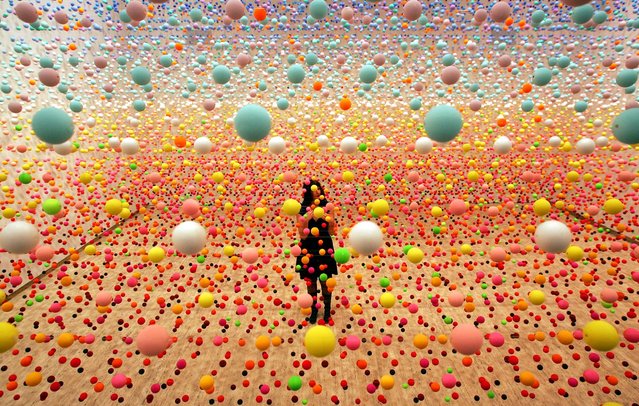 Australian artist Nike Savvas makes final adjustments to her art piece consisting of over 50,000 polystyrene balls at the New South Wales Art Gallery in Sydney August 3, 2006. The sculpture titled “Atomix – Full of Love, Full of Wonder”, vibrates with wind from 10 fans and represents the different “shimmering” colours in a hot, outback landscape. It is part of a sculpture exhibition “Adventures with Form in Space”. (Photo by David Gray/Reuters) 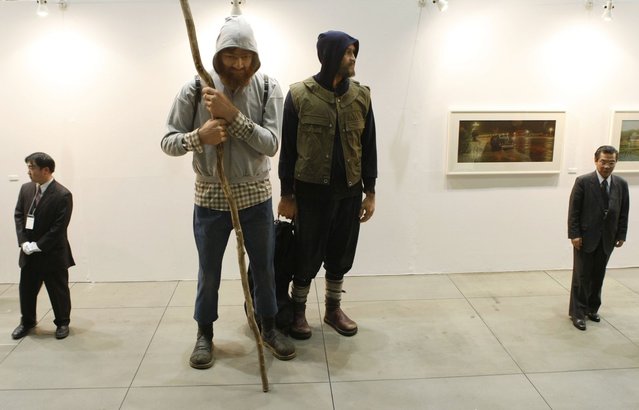 An exhibit titled “Giants”, created by Martin Honert of Germany, is displayed as gallery employees stand next to it at Art Fair Tokyo 2008 in Tokyo April 3, 2008. (Photo by Issei Kato/Reuters) 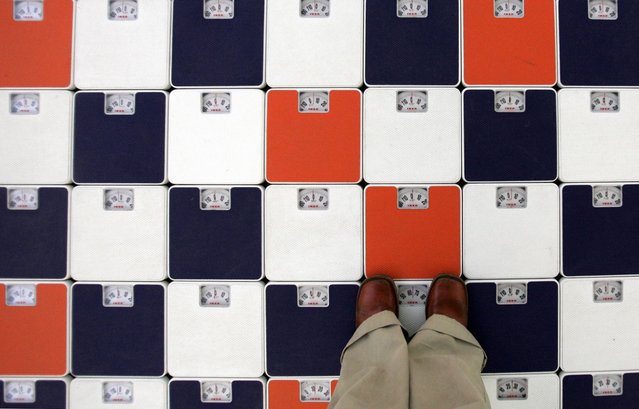 A visitor looks at an installation called “Heaven is a place on earth” by Swedish artist Jacob Dahlgren exhibited at “The Museum of May 25th” during the 47th October Salon for Contemporary Art in Belgrade October 24, 2006. (Photo by Marko Djurica/Reuters) 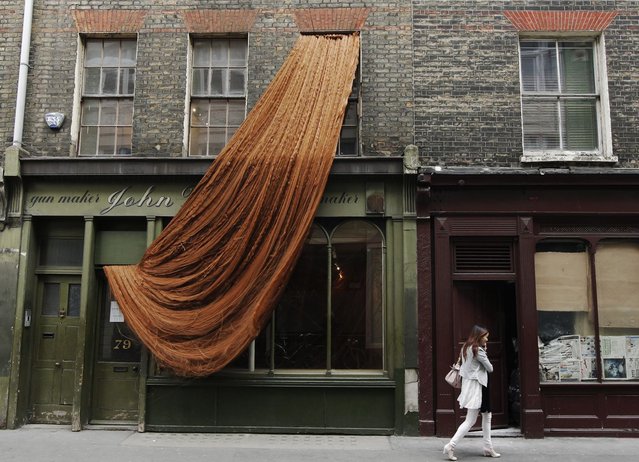 Hundreds of meters of dolls' hair cascades from the window of the Riflemaker gallery, part of an installation by French/Algerian artist Alice Anderson in London April 16, 2010. (Photo by Luke MacGregor/Reuters) 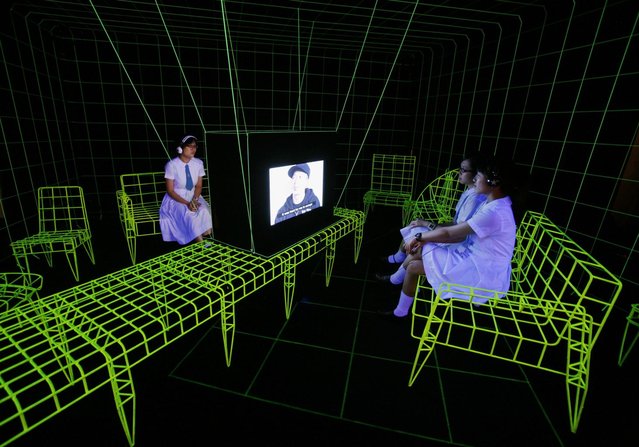 Student visitors pose from inside an installation titled “Crawling from the Wreckage” as part of England-born and Hong Kong-based Simon Birch's solo art exhibition “Hope & Glory” in Hong Kong May 3, 2010. (Photo by Bobby Yip/Reuters) 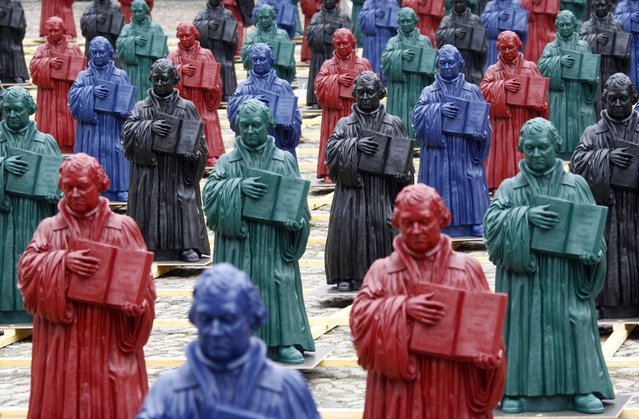 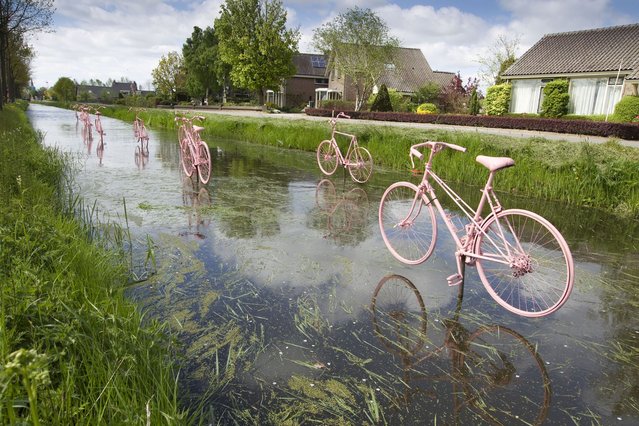 Pink bicycles placed just above the water celebrate the arrival of the Giro d'Italia in Schalkwijk, a small town ouside of Utrecht, May 4, 2010. Several cities in the Netherlands placed pink art forms to announce the departure on May 8 of the international cycling event. (Photo by Michael Kooren/Reuters) 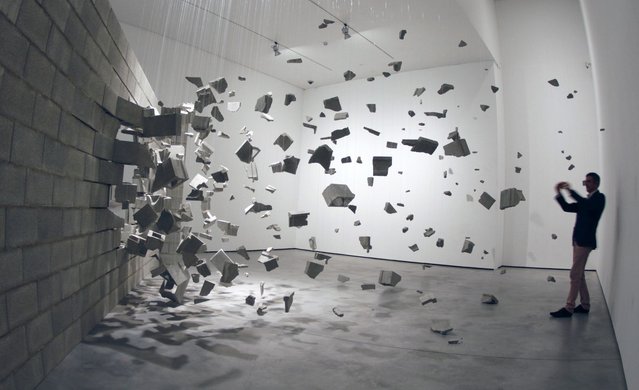 A visitor takes pictures of an installation representing an exploding wall by Cuban artists Dagoberto Rodriguez and Marco Castillo during an exhibit at Es Baluard museum in Palma de Mallorca, on the Spanish Balearic islands, October 17, 2011. (Photo by Enrique Calvo/Reuters) 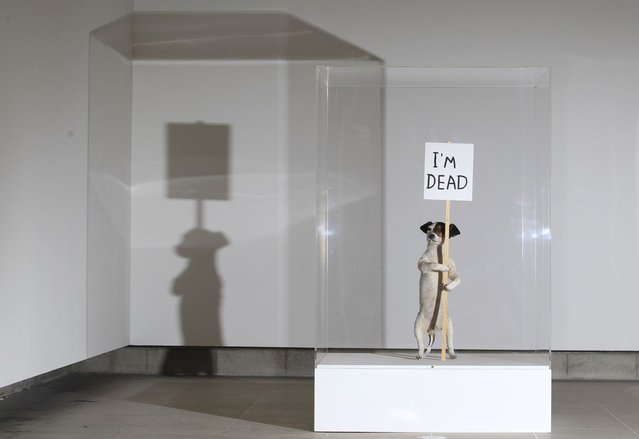 An artwork of a taxidermied Jack Russell terrier entitled “I'm Dead” (2010) is displayed during a media viewing of artist David Shrigley's first major UK exhibition at the Hayward Gallery in London January 31, 2012. (Photo by Olivia Harris/Reuters) 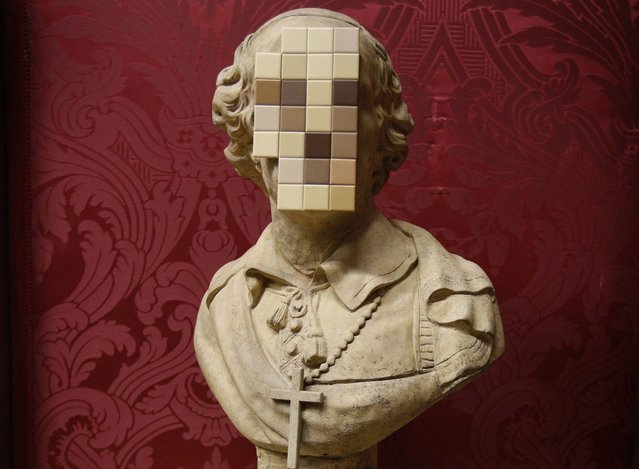 “Cardinal Sin” a new work by British artist Banksy is unveiled at the Walker Art Gallery in Liverpool Liverpool, northern England December 16, 2011. The piece made up of an 18th century replica stone bust of a cardinal with the face sawn off and replaced with a mosaic of bathroom tiles is thought to be a comment on the abuse scandal in the church and its subsequent cover-up, the gallery said in a press release. (Photo by Phil Noble/Reuters) 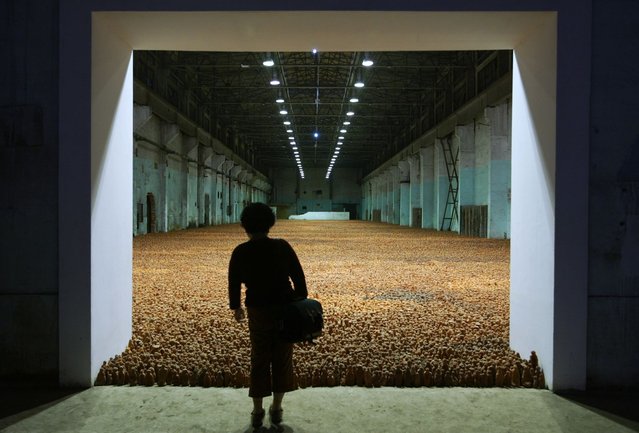 A Chinese visitor views a massive sculptural installation filling a factory warehouse at an exhibition by British artist Antony Gormley called “Asian Field” in Shanghai October 7, 2003. “Asian Field” is comprised of 192,000 clay figures, made under the guidance of Gormley, by over 300 people of all ages in China's Guangdong province using more than 100 tons of clay. (Photo by Claro Cortes IV/Reuters) 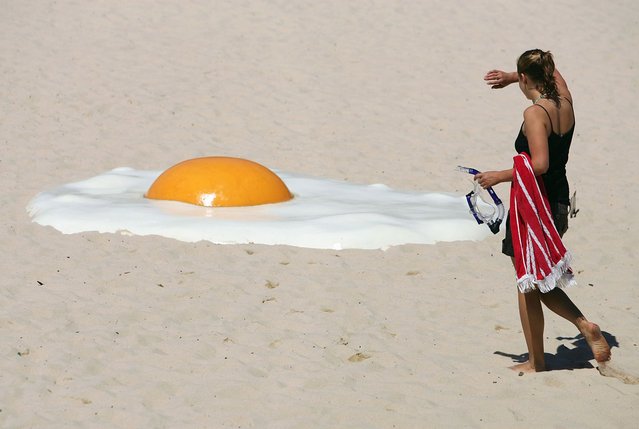 A woman approaches an artwork called “Big Chook”, made of fibreglass and high gloss epoxy marine paint, on Tamarama Beach in Sydney November 2, 2005. Australian artist Jeremy Parnell says people frying themselves on the beach for a suntan inspired his piece which joins 100 artworks contributed by international and Australian artists at the annual outdoor Sculpture by the Sea exhibition which is in its ninth year. (Photo by Will Burgess/Reuters) 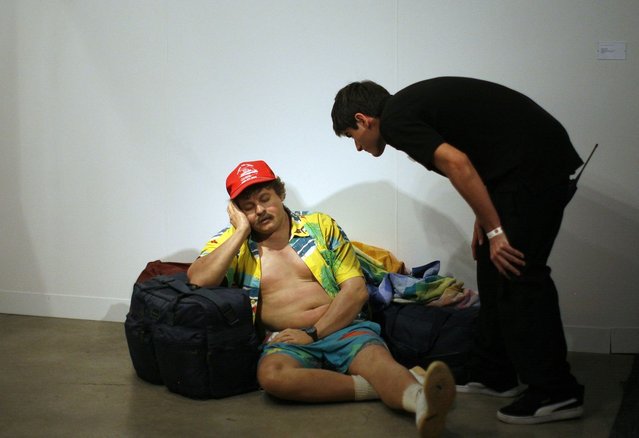 A man looks at a sculpture by Van De Weghe of U.S. during the Art Basel show in Miami Beach, Florida December 4, 2008. Art Basel Miami Beach is the sister event of Switzerland's prestigious Art Basel show. (Photo by Carlos Barria/Reuters) 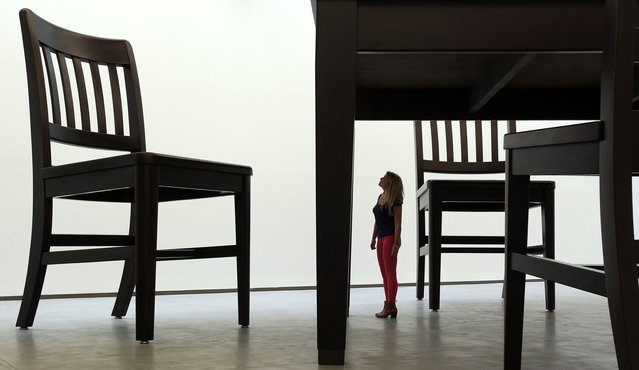 A visitor looks at a monumental sculpture by artist Robert Therrien in the newly opened Metropolitan Arts Centre in Belfast April 23, 2012. (Photo by Cathal McNaughton/Reuters) 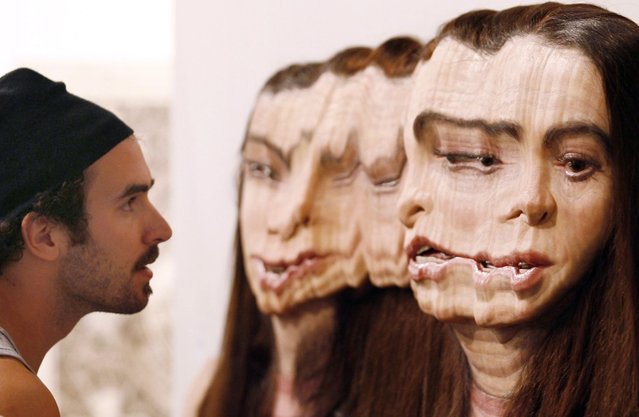 A three dimensional exhibit made from aluminum, silicone, pigment and hair by Canadian artist Evan Penny of Toronto is among a selection of more than 200 leading art galleries from around the world during Art Basel Miami Beach at the Miami Beach Convention Center December 7, 2007. (Photo byHans Deryk /Reuters) 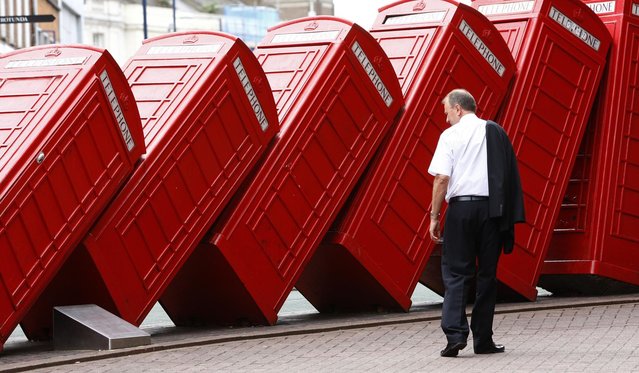 A piece by artist David Mach and entitled 'Out of Order' shows a row of traditional English red phone boxes in Kingston, south of London July 15, 2008. (Photo by Eddie Keogh/Reuters) 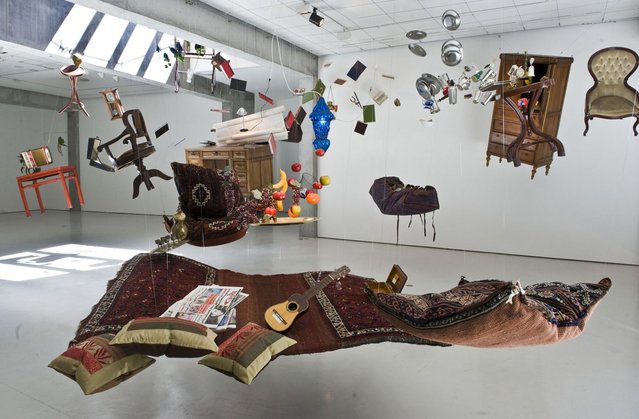 A work by Spanish artist Pamen Pereira is displayed during the exhibition “This is a love story” at a culture centre in Burgos, May 29, 2009. (Photo by Felix Ordonez/Reuters) 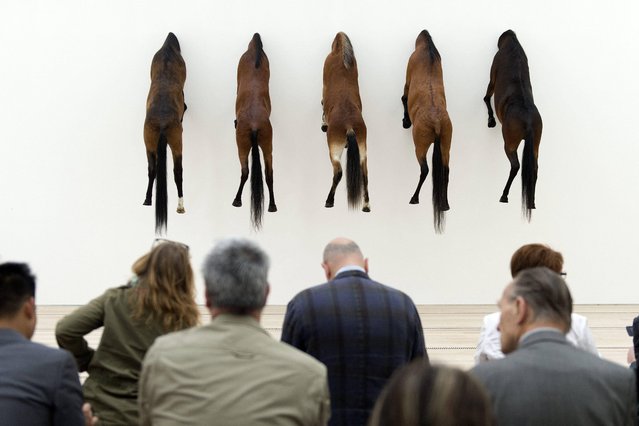