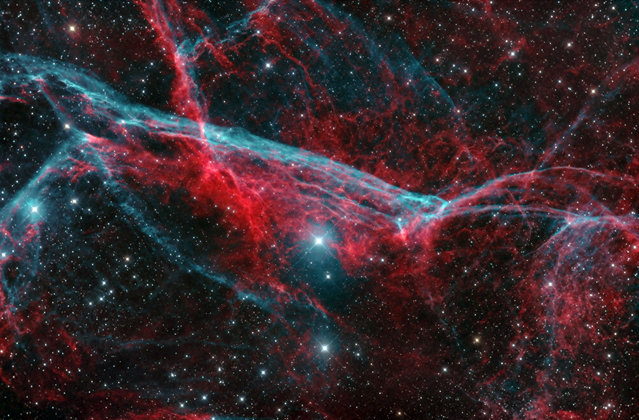 Gum 12. Eddie Trimarchi (Australia). The Gum nebula, or Gum 12, is an emission nebula that extends 36° across the night sky and is actually the 12,000-year-old remnant of the Vela supernova. It mainly consists of red hydrogen and blue doubly ionized oxygen. (Photo by Eddie Trimarchi/National Maritime Museum) 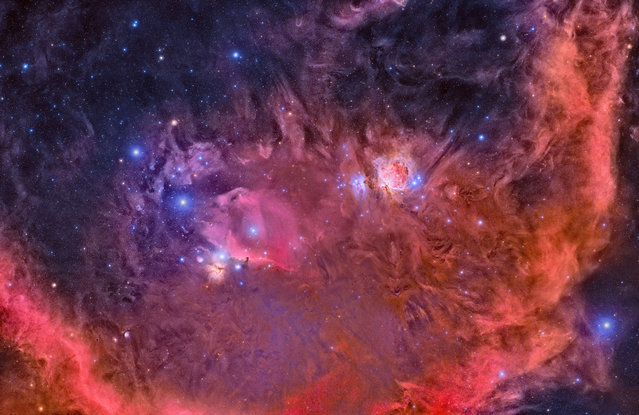 Orion. Paul Villaverde Fraile (Spain). This mosaic of nine photographs depicts several famous nebulas, such as the Orion and the Horsehead ones. In the lower left of the pictures, there is the reflection of nebula M 78, also known as NGC 2068. The surrounding ring is the emission nebula known as Barnard’s Loop. (Photo by Raul Villaverde Fraile/Royal Observatory Greenwich) 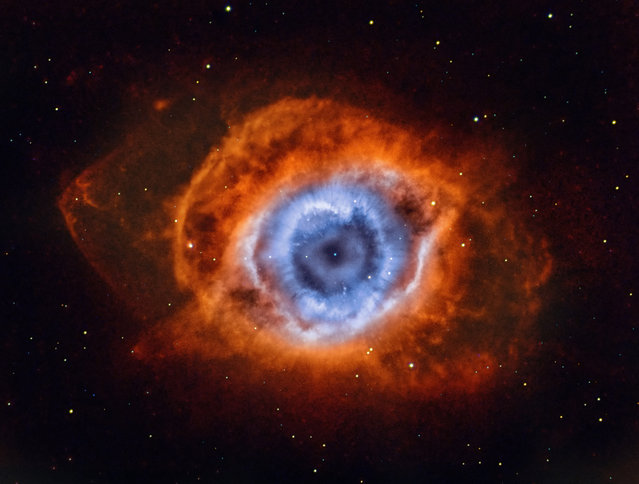 Deep in the Heart of Mordor – NGC 7293. Andrew Campbell (Australia). NGC 7293, also known as the Helix nebula, owns its name to the fact that it looks like looking down the axis of a helix. In reality, it has a surprisingly complex geometry, including radial filaments and extended outer loops. The Helix nebula is one of the brightest and closest examples of a planetary nebula, a gas cloud created at the end of the life of a sun-like star. (Photo by Andrew Campbell/National Maritime Museum) 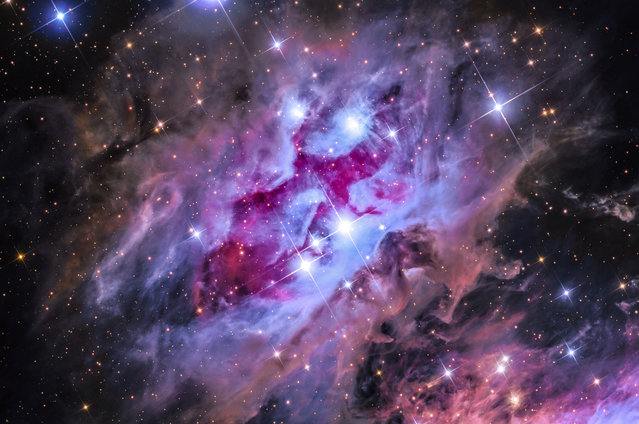 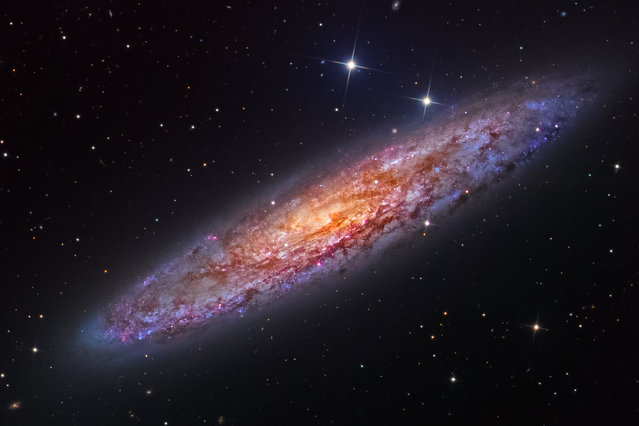 The Sculptor GalaxyBernard Miller, Martin Pugh (USA). This is an image of NGC 253, also known as the Sculptor Galaxy. It is a spiral galaxy about 11 million light years away in the constellation Sculptor. It is a starburst galaxy, which means it undergoes periods of intense star formation and is the largest galaxy in a group of galaxies called the Sculptor Group. (Photo by Bernard Miller and Martin Pugh/National Maritime Museum) 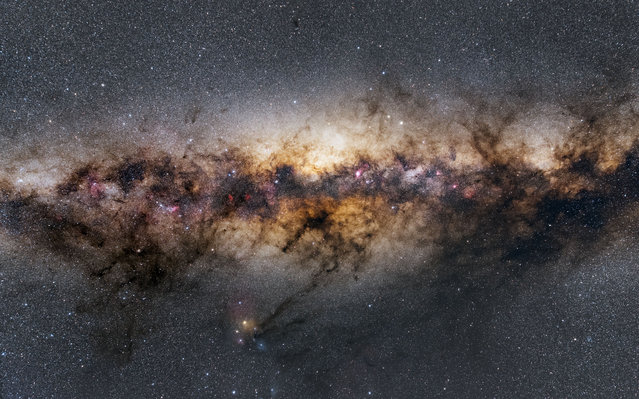 Milky Way Centre. Péter Feltóti (Hungary). The Milky Way, here shot from Namibia, is a barred spiral galaxy and at the center there is the galactic bulge, the heart of the galaxy, full of gas, dust, and stars. (Photo by Péter Feltóti/National Maritime Museum) 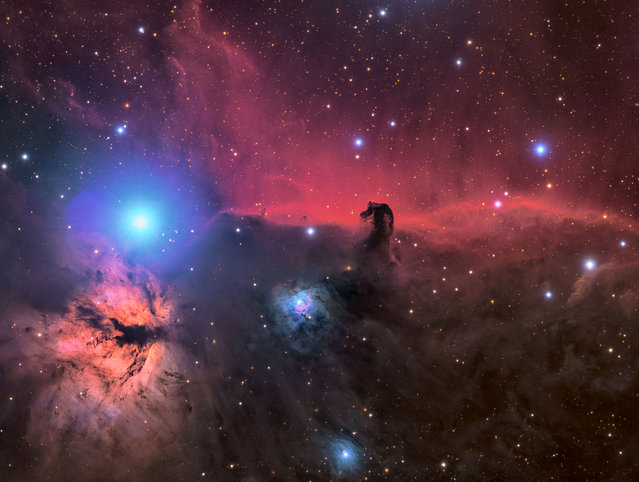 The Horsehead and Flame nebula. Connor Matherne (USA). The small pink filaments contrast beautifully against the blue reflection nebula. The photographer thinks of those small filaments as the cherry on top of this spectacular region of the night sky caught in a swirl of dust and gas. (Photo by Connor Matherne/National Maritime Museum) 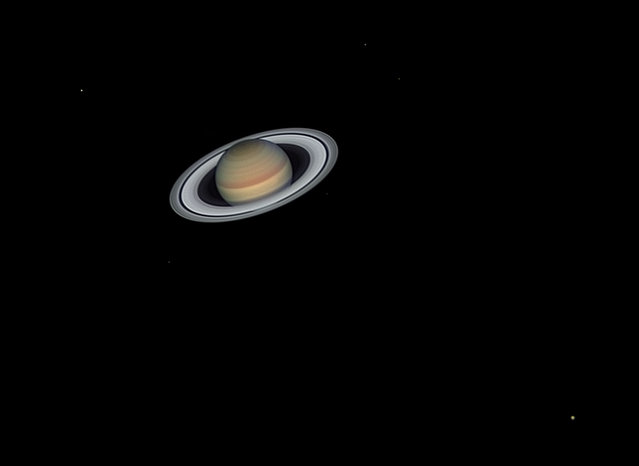 The Lord of the rings and his court. Jordi Delpeix Borrell (Spain). The image showcases Saturn’s bright rings and satellites. Titan is at the bottom right, Rhea on the top left, Tethys and Dione to the right of the planet and Enceladus and Mimas under the rings. Saturn’s tilt is cyclical and reaches maximum inclination every 15 years. The maximum tilt toward the Earth was in 2017. (Photo by Jordi Delpeix Borrell/National Maritime Museum) 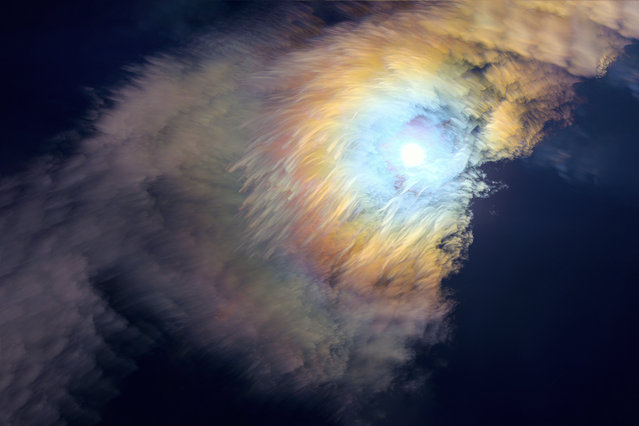 Seven-colour feather of the moon. Li Yiming (China). The image showcases the magnificent corona of the moon and the motion of the clouds resembling colourful brushstrokes on a painting. The photographer used dozens of pictures to build a stack. (Photo by Li Yiming/National Maritime Museum) 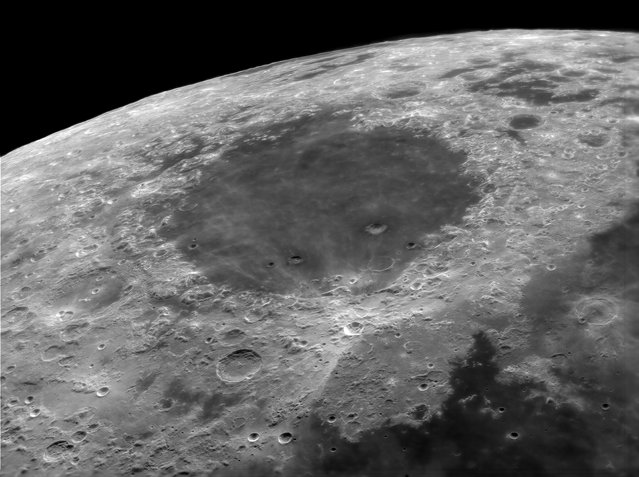 Coming in to land at Mare Crisium Spaceport! Bud Martin Budzynski (UK). This image depicts the Sea of Crises before first quarter, located in the moon’s Crisium basin, north-east of Mare Tranquillitatis and the shallow cliffs around the top of the Mare slope gently down to the “shore”. (Photo by Bud Martin Budzynski/National Maritime Museum) 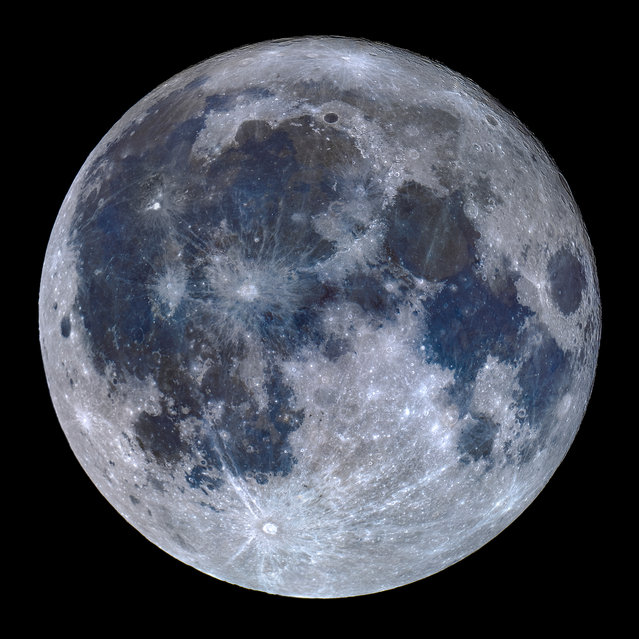 A Titanium Moon. Miguel Claro (Portugal). In this RGB image the colour has been slightly increased, but it reveals the real appearance of the moon. The differences in the chemical constitution of the lunar surface and changes in mineral content can produce subtle colour variations in reflected light. The blue hues that can be seen on the seas like Mare Tranquillitatis or Mare Fecunditatis (right centre and edge) are areas rich in titanium. (Photo by Miguel Claro/National Maritime Museum) 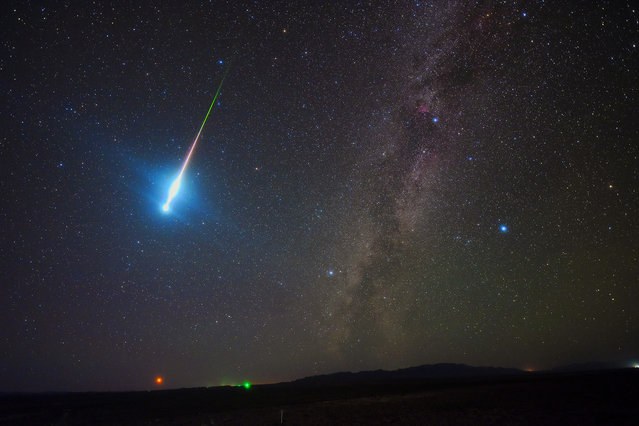 The Perseid Fireball 2018. Tang Zhengye (China). The image was taken at 4.45am on 13 August 2018 near Keluke Lake, Qinghai province, China. This was the photographer’s first meteor shower watch, who saw a fireball that flashed over the sky and lit up the ground just before leaving. The halo effect lasted about three minutes. (Photo by Tang Zhengye/National Maritime Museum) 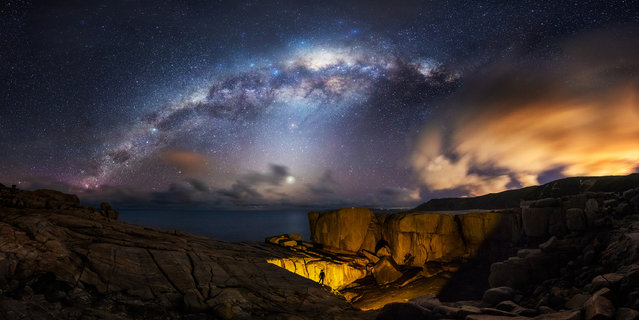 Albany Milkyway. Bai Yifan (China). Each year in September and October the Milky Way is at its best position. The galactic core is right in the middle of the sky. The photographer stood on the cliff by the sea and with his torch he lit up the natural bridge to make it look like a giant hole. The bridge was created by the gradual wearing away of the granite rock by the great Southern ocean. This is a panoramic image of 25 single exposures combined. (Photo by Bai Yifan/National Maritime Museum) 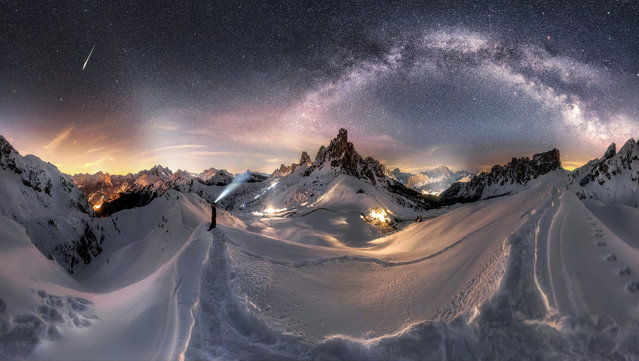 View Point. Nicolai Brügger (Germany). The spectacular Milky Way over the picturesque Bavarian mountain Herzogstand. The image also depicts a beautiful glow over the horizon, the lakes Walchensee and Kochelsee on the left side, and a tiny cabin on the right side. (Photo by Nicolai Brügger/National Maritime Museum) 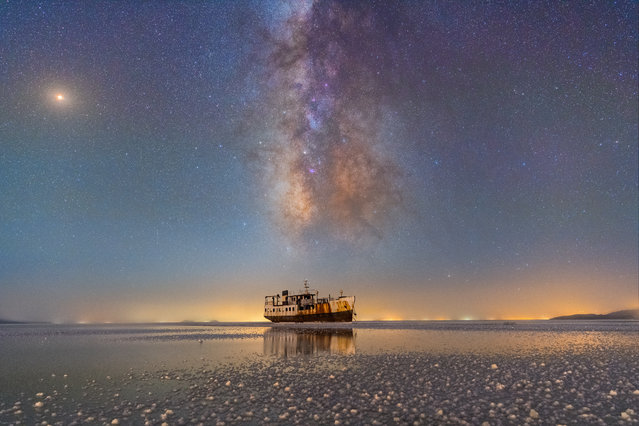 Sharafkhaneh port and lake Urmia. Masoud Ghadiri (Iran). The summer Milky Way is very prominent in this photo. On the galaxy zone, Saturn is located besides the Lagoon nebula. On the right of the horizon, you can see the extreme light pollution of Urmia, which is caused by ever-increasing city development. (Photo by Masoud Ghadiri/National Maritime Museum) 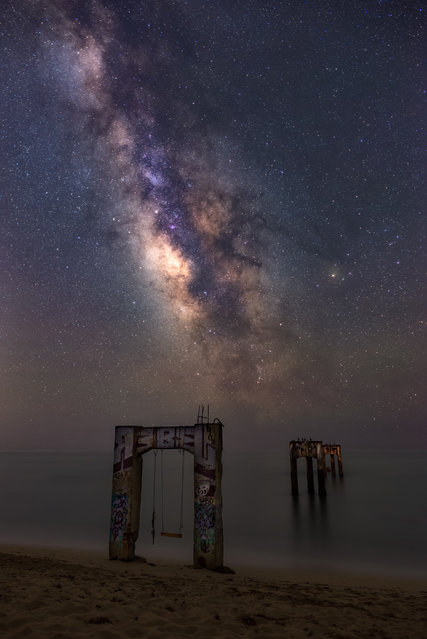 The Remnants. Marcin Zajac (Poland). The galactic centre shines bright over the Davenport pier. Built in the 1860s, the pier was a platform used for transporting timber towards San Francisco. Long abandoned since then, the wharf eroded and today only the concrete arches that once held the pier have survived the test of time. (Photo by Marcin Zajac/National Maritime Museum) 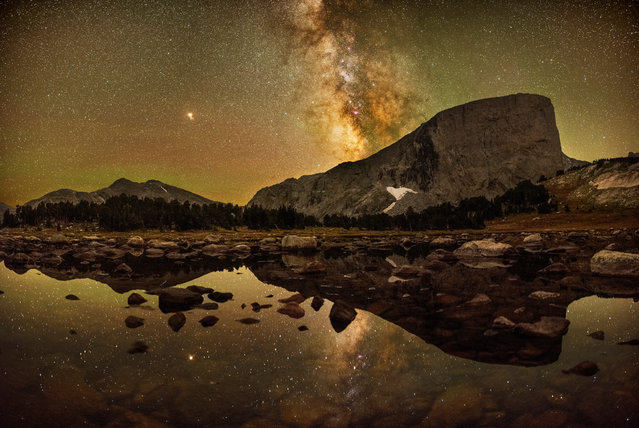 Reflections of Mount Hooker. Marc Toso (USA). Mount Hooker sits 15 miles past alpine lakes and mountain passes in the Wind River mountain range in Wyoming. After the sun set the photographer ventured across the lake near camp. Following the narrow tunnel of the headlamp’s beam, the photographer leapt from rock to stone across the water. The sky was clear, the glorious Milky Way was looming over the mountains and the stars shone bright, with everything reflecting beautifully on the foreground. (Photo by Marc Toso/National Maritime Museum) 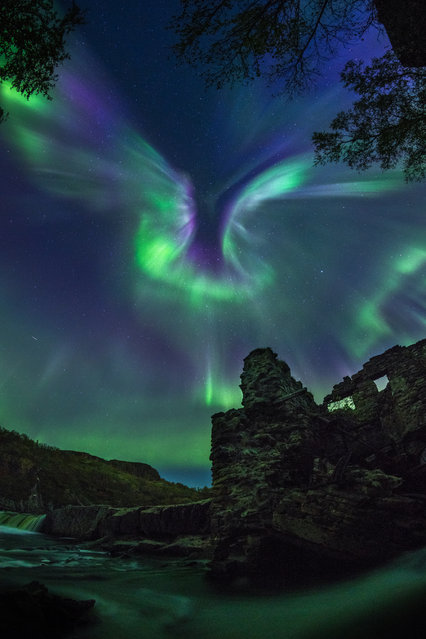 Aurora is a bird. Alexander Stepanenko (Russia). The majestic aurora, shaped like a bird, is spreading its wings over the destroyed military hydroelectric station located two hours away from Murmansk. (Photo by Alexander Stepanenko/National Maritime Museum) 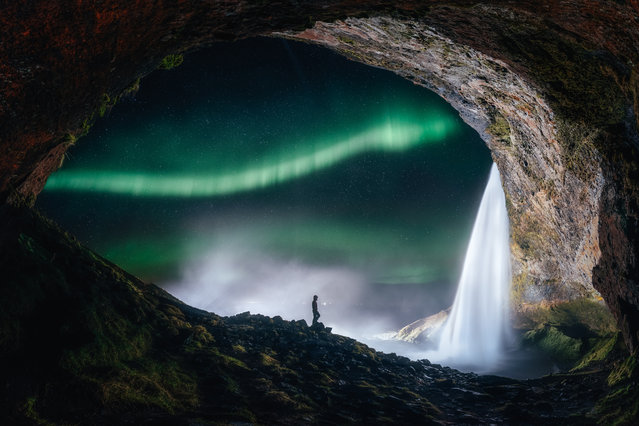 Aurora outside the tiny cave. Sutie Yang (China). The small cavern perfectly frames a mesmerising view of the aurora flaring up, the shining stars and the magnificent Seljalandsfoss waterfall on the south coast of Iceland. (Photo by Sutie Yang/National Maritime Museum)

Aurora like phoenix. Wang Zheng (China). As the Chinese New Year approached on 31 January, the photographer captured the Aurora Borealis looking like a phoenix, the mythical Chinese bird, flying in the sky over the Golden Circle. At the foreground, the aurora reflects its green colours on the river that is crossing through the snow. (Photo by Wang Zheng/National Maritime Museum)
Edit Del
20 Jun 2019 00:01:00, post received 0 comments
Publication archive:
←   →
Popular tags:
All tags
Last searches: