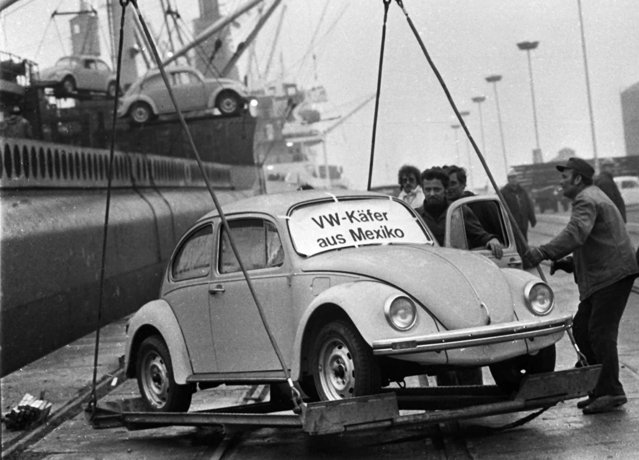 The first of a shipment of Volkswagen “Beetles” made in Mexico are unloaded at Emden harbor in Germany December 20, 1977, after Volkswagen ended production of the car in Europe. Volkswagen's new Beetle was unveiled at the North American International Auto Show in Detroit Monday, Jan 5, 1998. The new Beetle is larger inside and out than its predecessor and more costly, with a base U.S. sticker price of $15,200. The sign on the windshield reads, in German, “Volkswagen Beetle from Mexico”. (Photo by Heinz Ducklau/AP Photo) 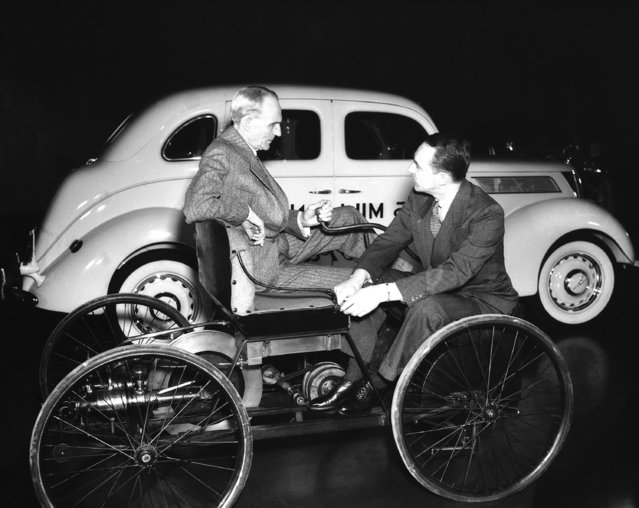 The companionship that exists between the rulers of a mighty automobile manufacture empire Henry Ford and his son, Edsel Ford. Here they are sitting on the elder Ford's first car with the 25-millionth in the background on December 21, 1939. Note the profile resemblance the philosophy of the younger Ford, President of the entirely-family-owned two-billion-dollar concern, is of major importance to the financial and automotive worlds for it will someday determine the fiscal and industrial policies of a huge and vital segment of the world's economic and business structure. (Photo by AP Photo) 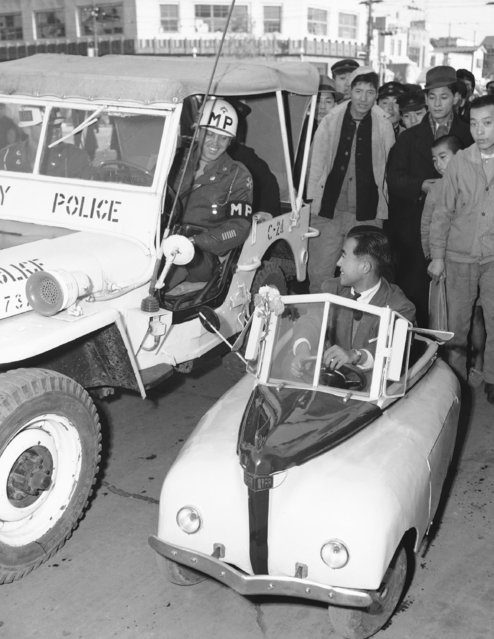 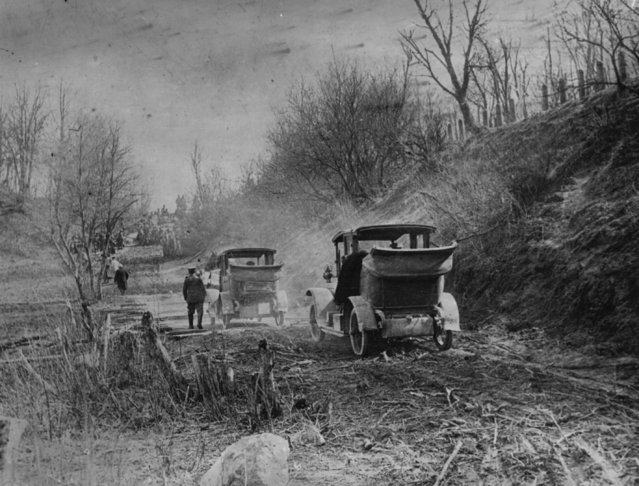 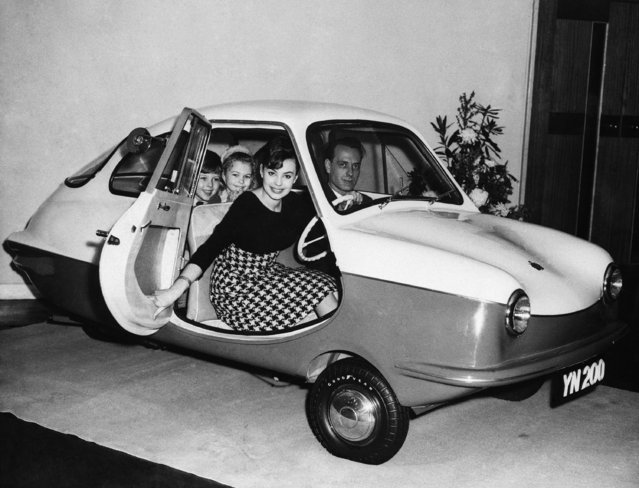 With four persons seated comfortably inside,a new English low priced, three wheel car, a Nobel 200 is put on display in London, February24,1959. The Nobel 200 is produced by Short Brothers and Harland, the body coming from the Bristol Aeroplane Company's works. The three-wheeler is powered by a single-cylinder, air-cooled engine. Drive is on the back wheel, ratioed through a four-speed gear-box which can go up to 60 miles an hour. (Photo by AP Photo) 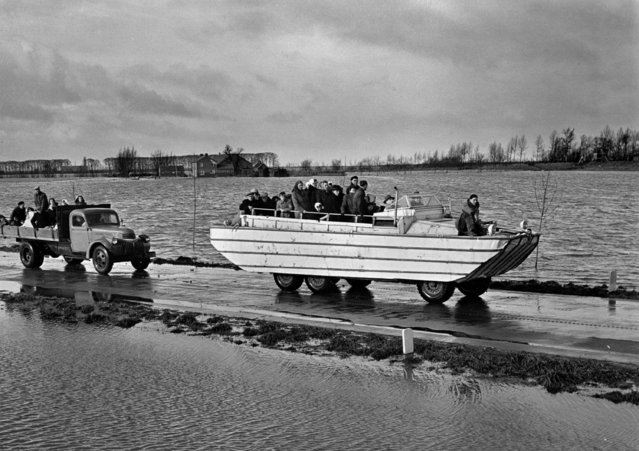 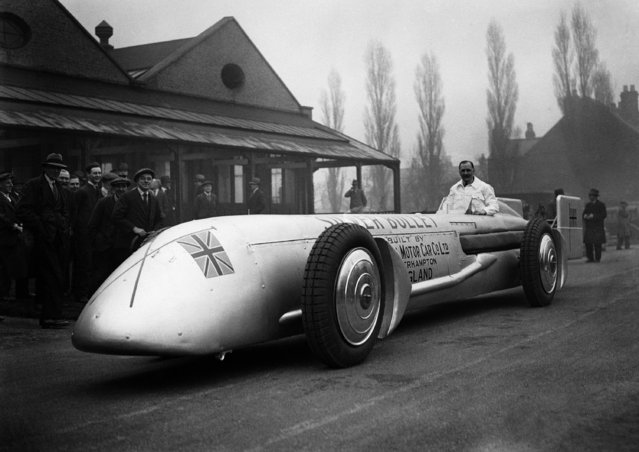 Kaye Don seated in the cockpit of his new racing car the “Silver Bullet” at Wolverhampton, England on February 21, 1930, in which he will attempt to beat world land speed record at Daytona. It has two 12-cylinder V shaped engines and each develops 2,000-h.p. The theoretical speed of the car is 275 m.p.h. but the designer estimated that will be able to reach 250 m.p.h. allowing for wind pressures. (Photo by AP Photo/Staff/Puttnam) 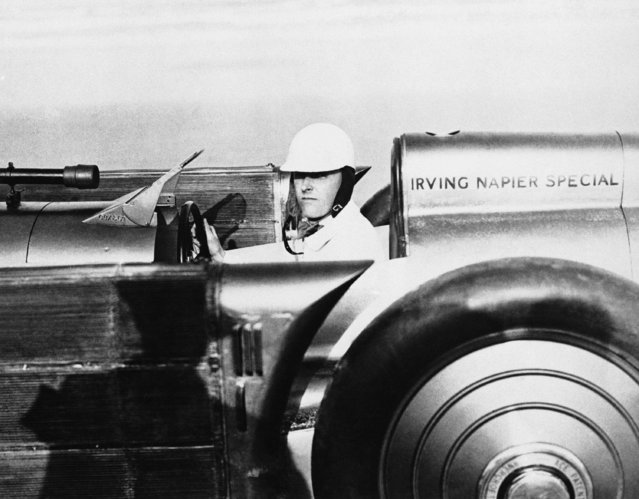 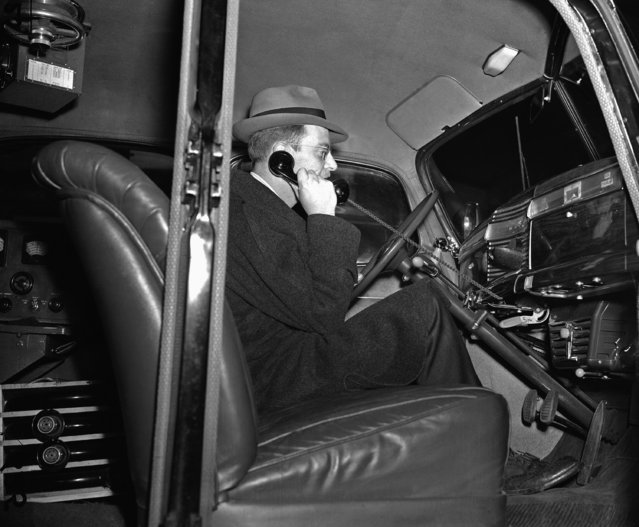 Direction finding equipment in this radio spy patrol car tells how close the car is to a transmitting set and can even spot the room of an apartment from which signals are coming, shown February 27, 1941 in Washington. (Photo by AP Photo) 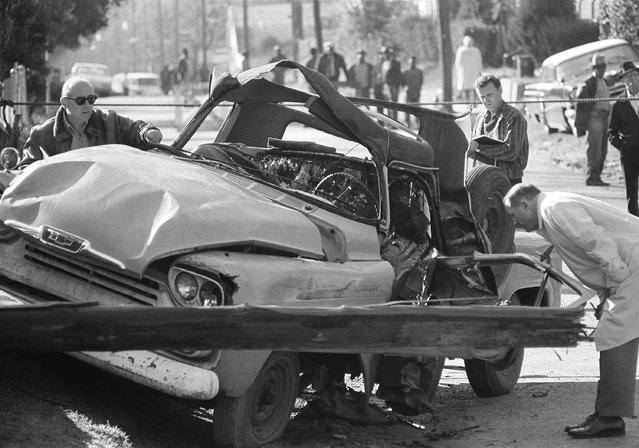 Natchez police and agents from the FBI inspect a truck in Natchez, Mississippi, February 28, 1967, which exploded from a bomb blast and killed Wharlest Jackson, ex-treasurer of the local NAACP. (Photo by AP Photo) 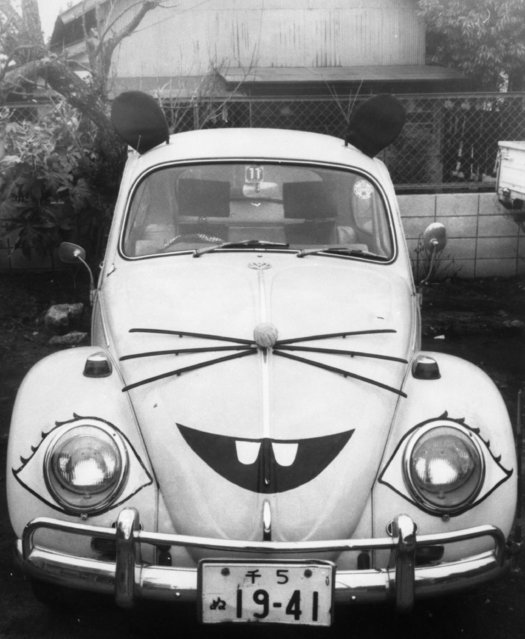 A Volkswagen Beetle with a mouse design which belongs to an exterminating company in Tokyo, Japan shown around January 10, 1972. The design was put on the vehicle to match the local zodiac year. (Photo by AP Photo) 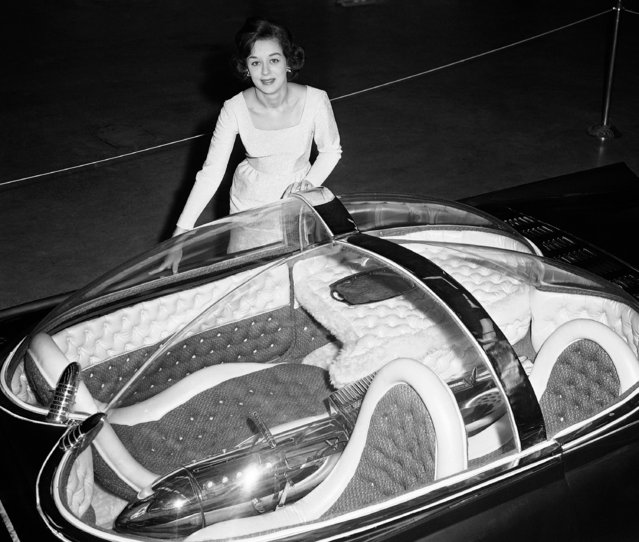 A mecca for auto buffs is the annual Autorama in Detroit, Michigan, January 10, 1964. This year's show, the 12th, brought out a display of red-hot hot rods and fantastic “dream cars”, with more conservative custom cars, go-karts, hand-built and antique cars, drag boats and model cars, 250 or more exhibits in all. Cars entered in competition for prizes at the show must have competed successfully in at least four other shows. Palema Dulmage, Queen of the Autorama, stands by space age car. (Photo by Preston Stroup/AP Photo) 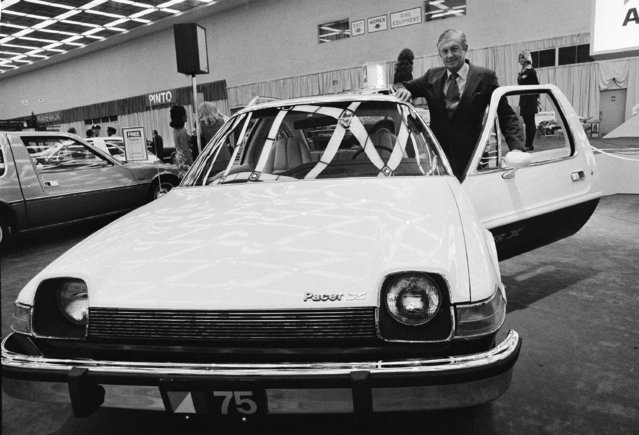 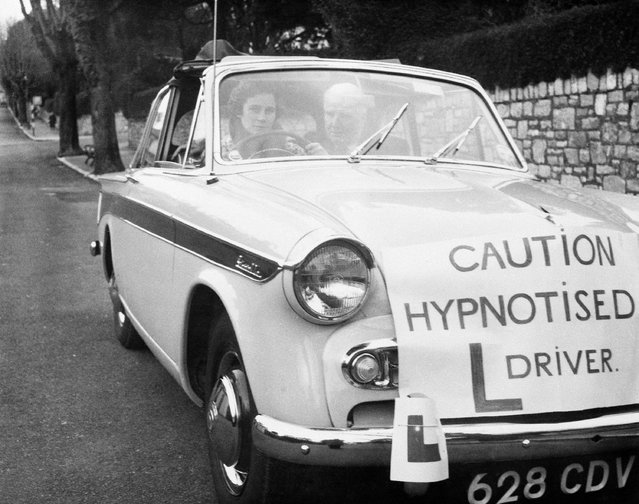 It figures that motorists in Torquay, England, will give this car a wide berth. Not only is the driver, Sally Blythe, 17, hypnotized but she is learning to operate a car, Januaary 20, 1960. Riding with her is her father, hypnotist Henry Blythe, who claims to have aided 48 other learner drivers through hypnotism. (Photo by AP Photo) 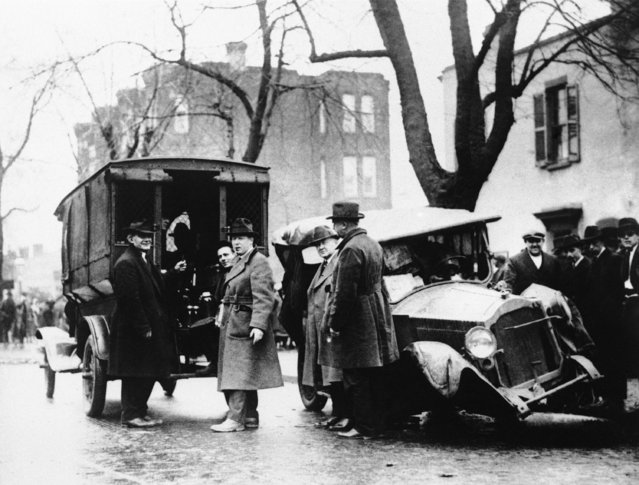 Patrol wagon filled with confiscated moonshine while wrecked car of bootleggers rests by the curb in Washington on January 23, 1922. (Photo by AP Photo) 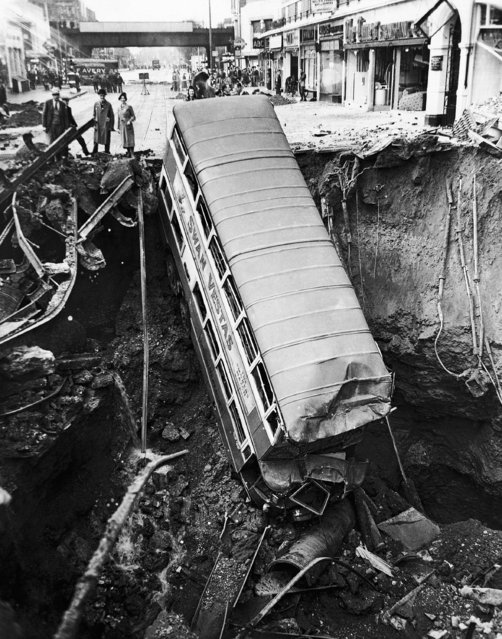 This unusual view of a bus nosed into a huge bomb crater in a London street, was made after one of last year's heavy night air raids of 1941. The omnibus seen in the crater in a London Suburban street in photo released on January 23, 1942. (Photo by AP Photo) 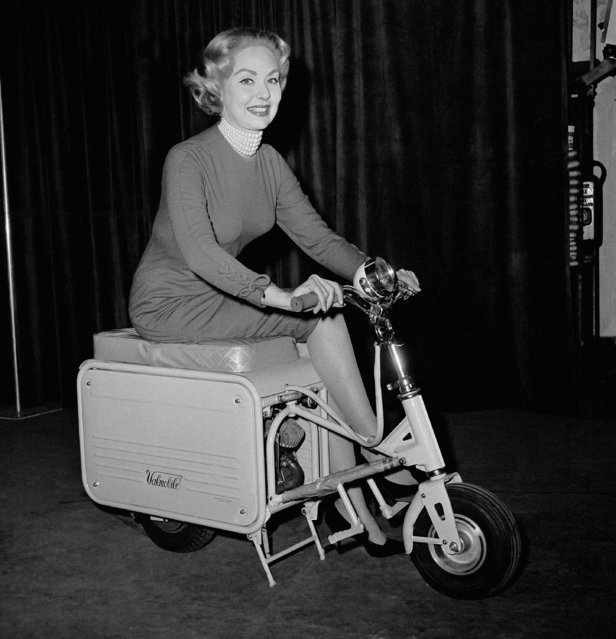 Joan Kagman demonstrates a new portable scooter designed for compact transport in a car, plane or boat or for storing in an apartment. It was shown at the International Sports, boat and vacation show in Chicago, on January 23, 1961. The scooter, equipped with a one cylinder motor and seating two, can, according to its makers, ranch a top speed of 35 miles on hour and can go as far as 165 miles on a gallon of gasoline. It weighs but 84 pounds. (Photo by AP Photo/ESK) 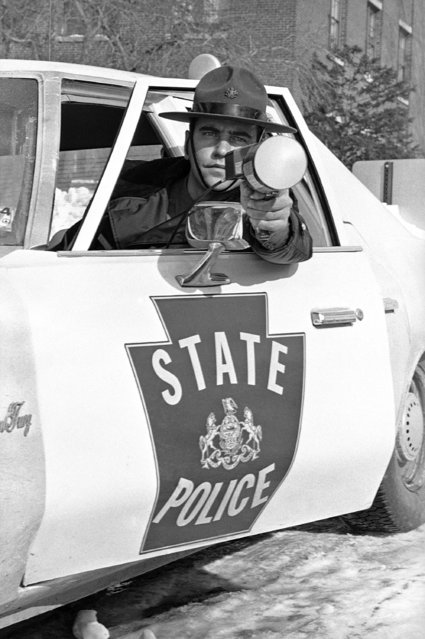 Pennsylvania State Police Trooper A. J. Probst leans out of window of his patrol car displaying the new portable radar unit in Harrisburg, Pa., on January 25, 1978 the state police will use starting February 1. The new units are expected to be more effective than previous models. The radar gun can operate in both directions and records speed on back of unit which is hand held. (Photo by Paul Vathis/AP Photo) 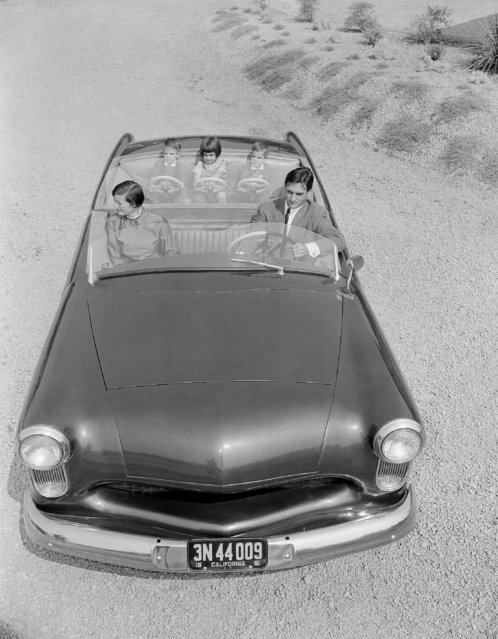 To keep the kids happy when out driving, Jack Fletcher, designer at 21st Century Home, has installed three miniature steering wheels and a plastic windshield in their car at West Covina, Calif., January 4, 1955. In the car are: Joan Fletcher, left-front, Jack Fletcher, right-front and in the backseat are: Johnny, 21 mos., Janie, 3yrs. and Ricky, 21 mos. (Photo by Don Brinn/AP Photo) 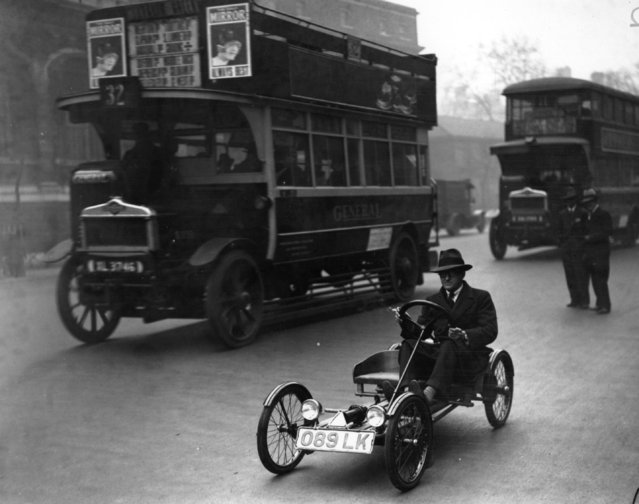