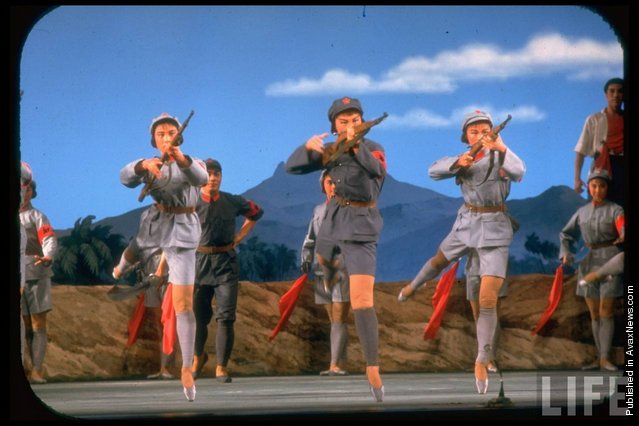 “«The Red Detachment of Women» (simplified Chinese: 红色娘子军) is a Chinese ballet which premiered in 1964. It is perhaps best known in the West as the ballet performed for U.S. President Richard Nixon on his visit to China in February 1972. Adapted from the earlier film of the same title under the personal direction of Zhou Enlai, which in turn adapted from the novel by Liang Xin, it depicts the liberation of a peasant girl in Hainan Island and her rise in the Chinese Communist Party”. 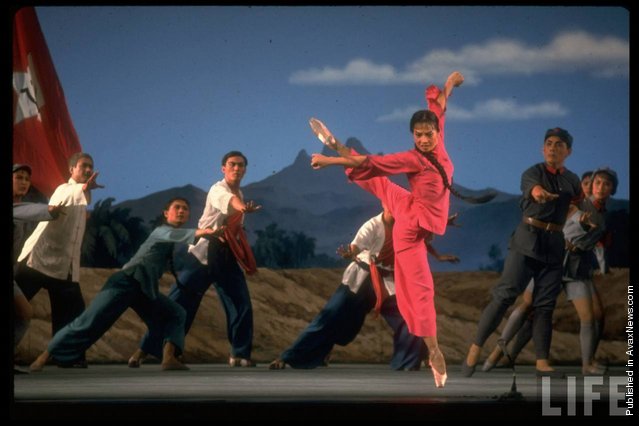 “The novel was based on the true stories of 100+ member strong all-female Special Company of the 2nd Independent Division of Chinese Red Army, first formed in May, 1931. As the communist base in Hainan was destroyed by the nationalists, most of members of the female detachment survived, partially because they were women and easier to hide among the local populace who were sympathetic to their cause”. 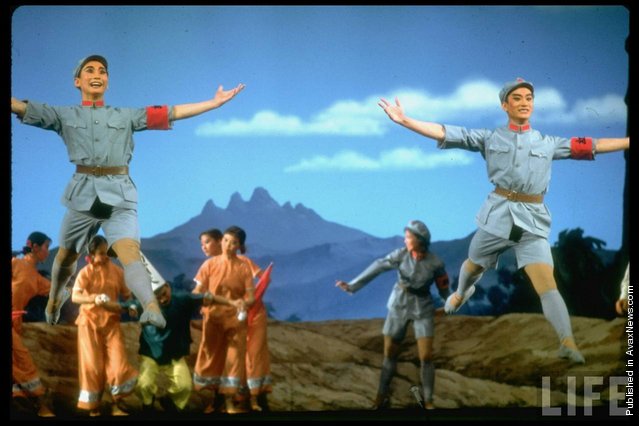 “After the communist victory in China, the representatives of the surviving members were taken to Beijing and personally inspected and praised by Mao Zedong. Most of these surviving members currently reside in the city of Qionghai (84 survivors in 1994, 23 in 2001, 14 in 2008)”. 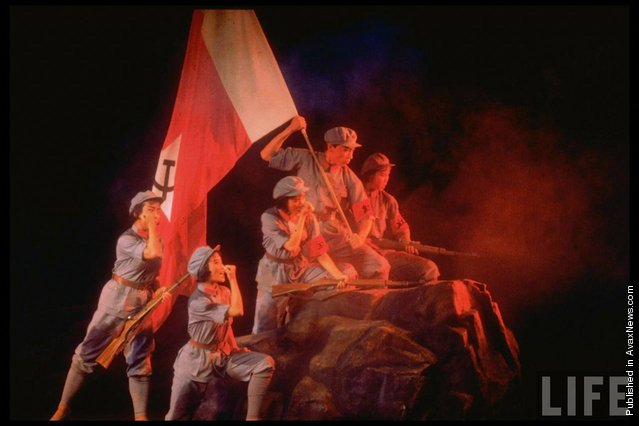 “The ballet was later adapted to a Beijing opera in 1964, and as with the ballet itself, both stage and film versions were produced. The 1961 film version of the ballet made Xue Jinghua (as Wu Qinghua) and Liu Qingtang (as Hong Changqing) superstars along with a dozen other artists who were cast as protagonists in other model plays of the time”. 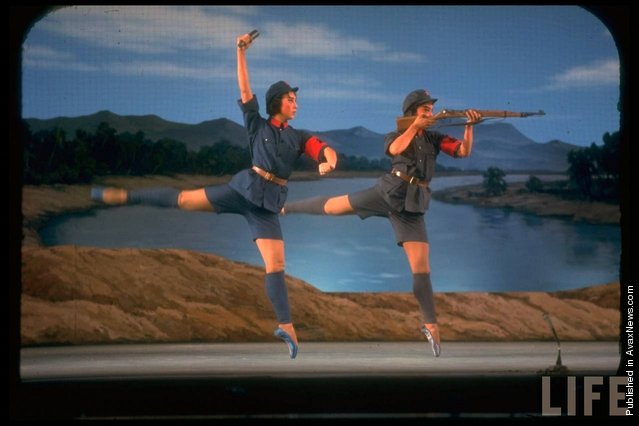 “It is one of the so-called eight model plays, the only plays, ballets and operas permitted in China during the Cultural Revolution (1966–1976). With The White Haired Girl, it is regarded as a classic Chinese ballet, and its music is familiar to almost every Chinese person who grew up during that time. It was made into a film in 1972 again, and is now part of the permanent repertoire of the National Ballet of China”. 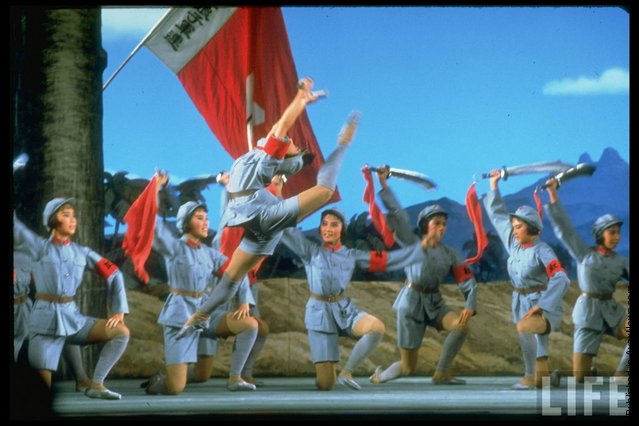 “Despite its political overtones and the historical background when it was created, it remains a favorite of music and ballet lovers nearly 30 years after the Cultural Revolution in China”. 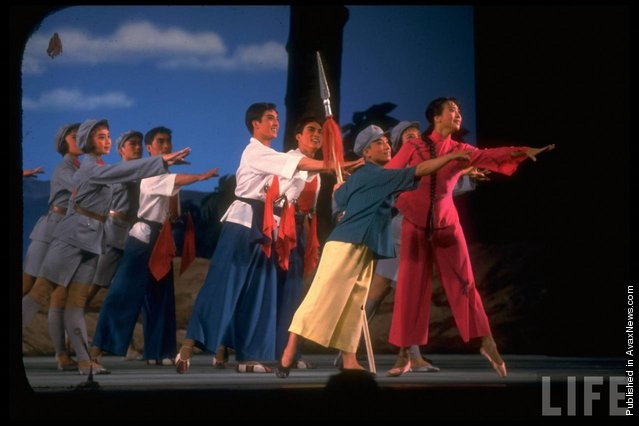 “Many numbers were based on the folk songs of Hainan Island, a place that, with its coconut trees rustling in tropical wind, evokes much romantic ethos”. 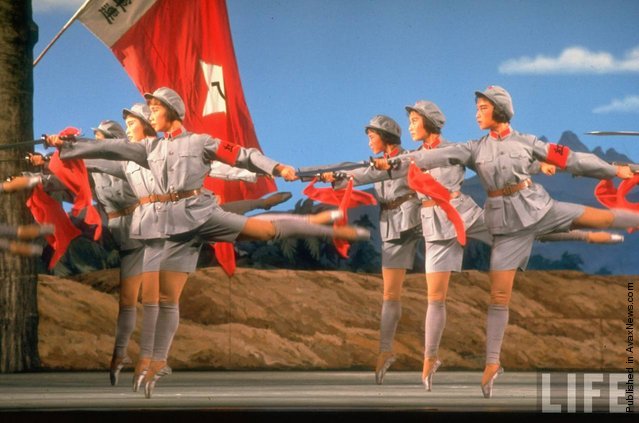 “Though there are unmistakable elements of Chinese music, the music of this ballet was performed with basically a Western symphony orchestra”. 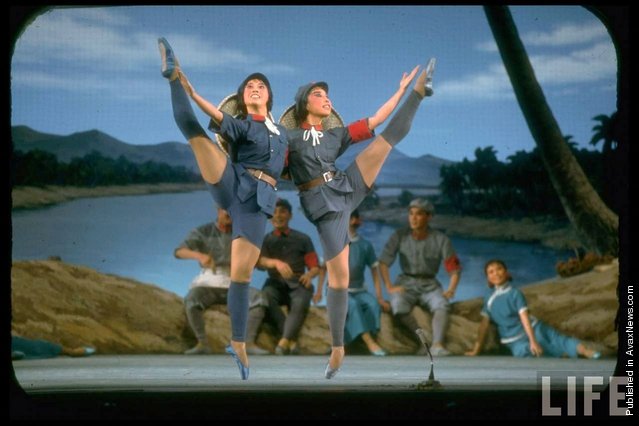 “Prologue: In his dungeon, Nanbatian, the despotic landlord, has imprisoned his tenants who are unable to pay their exorbitant rents. Wu Qinghua, daughter of a poor peasant, is chained to a column. Lao Si comes with the order of Nanbatian to sell Wu. Lao Si releases Wu from the chain. While Lao Si is in an unguarded moment, Wu kicks him, and he loses his balance and falls. Wu manages to escape while two other inmates hold Lao Si to the ground”. 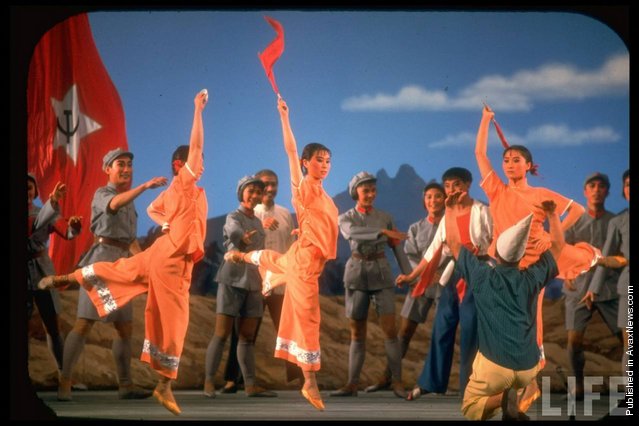 “Act I: Immediately after the prologue. Night has fallen in the coconut forest and Wu Qinghua is desperately running away from Lao Si and his lackeys. She is soon recaptured. Nanbatian and his entourage arrive. The Tyrant whips Wu until she loses consciousness. A thunderstorm approaches, so Nanbatian and his followers leave and Wu is left for dead. Hong Changqing, the Commissar, and Xiao Pang, the Messenger, who are on a reconnaissance mission in disguise, pass by. They save Wu and point her the way to the camp of the Red Army”. 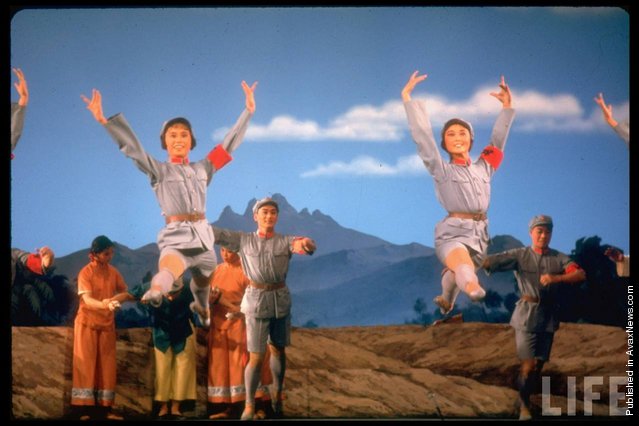 “Act II: In the camp of the Red Army beside the Wanquan River, a newly formed Detachment of Women is being trained. Wu Qinghua arrives to meet Hong Changqing and Xiao Pang, who introduce her to others. In a solo dance, Wu tells the Red Army soldiers the enormity of Nanbatian's crimes. She then ceremoniously receives a rifle and is accepted as a member of the Women's Detachment. With determination, they plan to liberate the peasants and slave girls under the oppression of Nanbatian”. 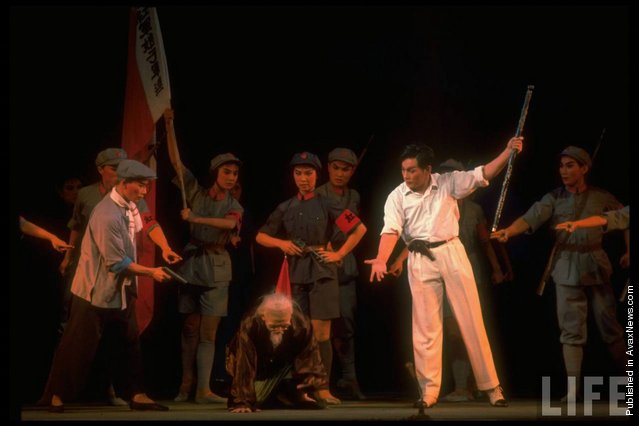 “Act III: In the luxurious manor of Nanbatian, an extravagant birthday celebration for the Tyrant is going on in the garden before his house. Mountains of gifts are brought in; visitors are arriving, Li girls are driven in with whips at their backs to dance for the guests”.

“Hong Changqing, disguised as a wealthy merchant from southeast Asia, arrives on the scene, calm and dignified, to congratulate Nanbatian on his birthday. Meanwhile, the members of the Women's Detachment have secretly gathered around the manor of the Tyrant. It has been agreed that Hong is to fire his gun at midnight as signal for the Detachment to break in to wipe out the Tyrant and his gang in one fell swoop.

At night, all people recede into the houses. Nanbatian comes out to see some of his guests off. Overcome by deep personal hatred, Wu Qinghua shoots Nanbatian, prematurely issuing the battle signal. Nanbatian is merely wounded and escapes from a secret tunnel with a few of his lackeys.

Nanbatian's prisons are opened, and the prisoners are liberated. Hong leads them in opening the granary of the Tyrant and distributing the grain. Wu is reprimanded for her blunder, and her gun is removed from her”. 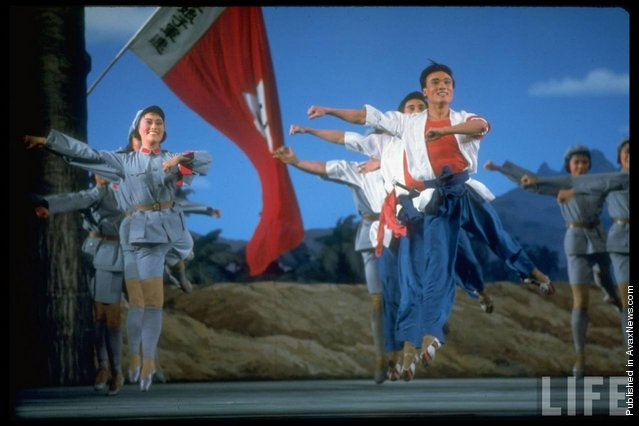 “Act IV: Back in the camp of the Red Army. Hong Changqing, the Commissar, is giving a lecture to the soldiers in the early morning. Wu Qinghua comes to grips with her mistake. Hong and the Company Commander are pleased to see Wu's progress. The Company Commander returns the gun to her, and together they practice marksmanship and grenade throwing.

The local people visit the Red Army and present them with doulis and lichees. Suddenly, the sound of cannons is heard and Xiao Pang, the Messenger, arrives on horseback with the information that Nanbatian has assembled a large number of troops, and they are on their way to attack the base of the Red Army. The members of the Detachment immediately bid goodbye to their dear ones and set out to the battle field”. 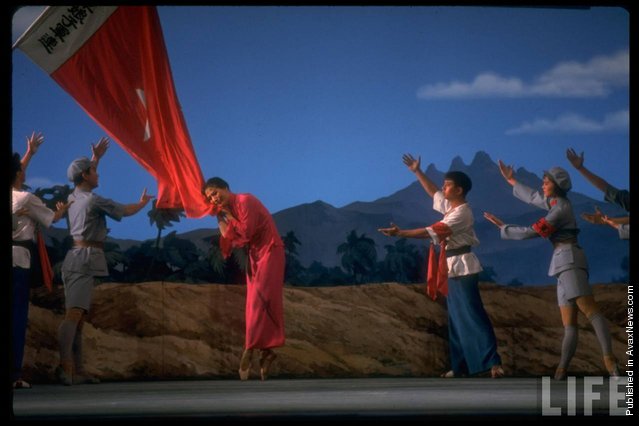 “Act V: On the battlefield at a mountain pass. In order to annihilate the enemy's effective power, the main force of the Red Army strategically shifts to the rear of the enemy, and the Company Commander leads most of the members of the Detachment in moving away with the main force. Hong Changqing and a small group of Red Army soldiers and Red Guards form a covering force to divert the enemy. After a series of fierce fights, the goal is achieved.

As they prepare to withdraw, the enemy starts yet another attack. Hong gives his portfolio to Wu Qinghua and orders her and other members to retreat while he and only two other soldiers stay behind to fend off the enemy. Hong's two comrades-in-arm are killed and he himself is captured”. 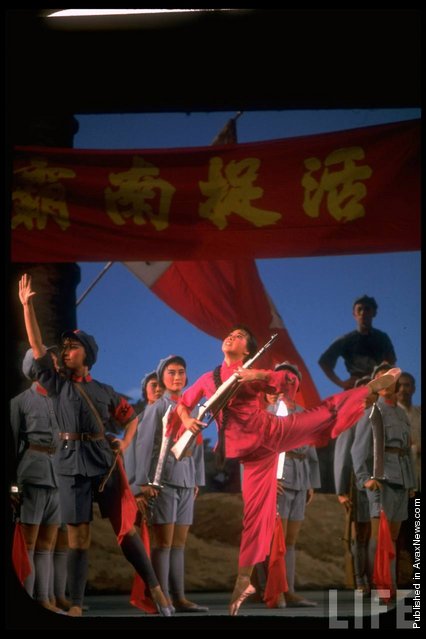 “Act VI: In the lair of the Tyrant, Nanbatian and his lackeys are panic-stricken knowing that their end is approaching. The Tyrant runs out all his means to force Hong Changqing to surrender, but the Commissar vehemently denounces the enemy. Nanbatian threatens Hong with death, but the hero remains steadfast. At the end, Hong is burnt in a horrid fire under the giant banyan tree amidst a chorus of the Internationale, and he dies a martyr's death.

The main force of the Red Army has won their battle with the enemy. They storm the hideout of the Tyrant and kill him and his lackeys. The Red Army emancipates Nanbatian's prisoners and Yelinzhai is liberated.

Wu Qinghua and the Company Commander look everywhere for Hong and find the truth. They all kneel in front of the place where Hong has died to pay their respects to the hero. The Red Army Battalion Commander announces that Wu will succeed Hong as the Commissar of the Women's Detachment. Wu takes over Hong's portfolio, and she and her comrades-in-arm will continue their revolutionary cause”.
Edit Del
11 Mar 2011 11:36:00, post received 0 comments
Publication archive:
←   →
Popular tags:
All tags
Last searches: