Fact Searching for Remains of the Dead Sea Scrolls 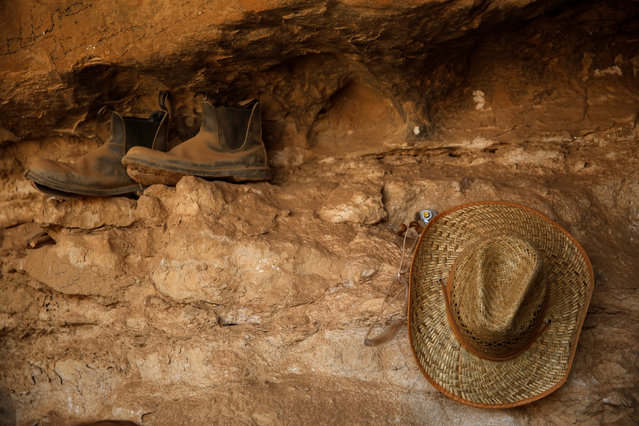 A hat and boots belonging to a volunteer with the Israeli Antique Authority are seen inside the Cave of the Skulls, an excavation site in the Judean Desert near the Dead Sea, Israel June 1, 2016. A team of volunteers and archaeologists are searching for remains of The Dead Sea Scrolls, one of the oldest known Hebrew texts, in a national bid, initiated by the Israel Antiquities Authority (IAA), to prevent the robbery of such important artefacts and once found to hand them over to the state for preservation. (Photo by Ronen Zvulun/Reuters)
Details
02 Jun 2016 12:17:00,post received 0 comments
Fact Israel Museum Displays Dead Sea Scrolls 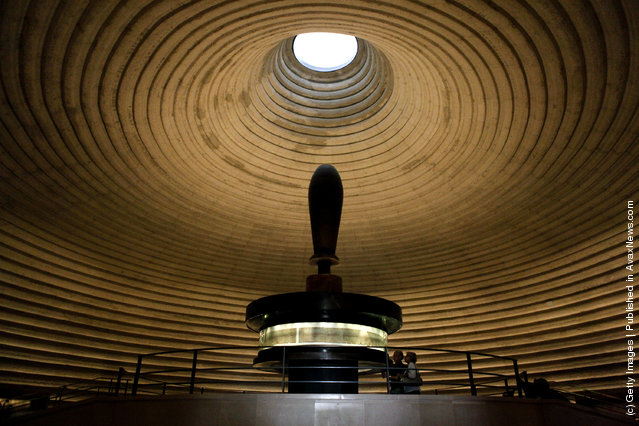 Dr. Adolfo Roitman presents a part of the Isaiah Scroll, one of the Dead Sea Scrolls, inside the vault of the Shrine of the Book building at the Israel Museum on September, 26, 2011. in Jerusalem, Israel. For the first time some of the Dead Sea Scrolls are available online thanks to a partnership between Google and Israel's national museum. (Photo by Lior Mizrahi/Getty Images)
Details
30 Sep 2011 11:08:00,post received 0 comments
Fact Death of the Dead Sea 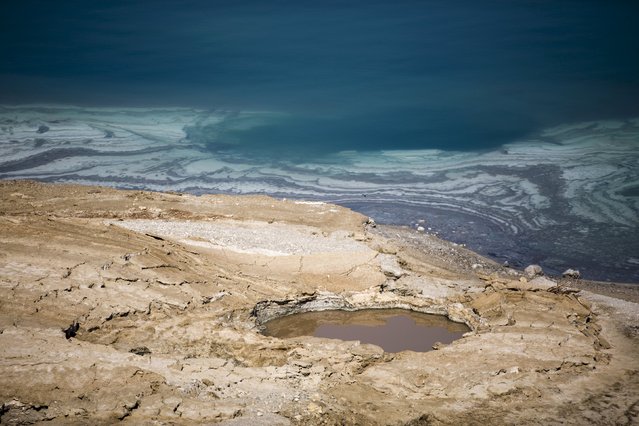 A sinkhole is seen on the shore of the Dead Sea near Kibbutz Ein Gedi, Israel July 27, 2015. The Dead Sea is shrinking, and as its waters vanish at a rate of more than one meter a year, hundreds of sinkholes, some the size of a basketball court, some two storeys deep, are devouring land where the shoreline once stood. (Photo by Amir Cohen/Reuters)
Details
30 Jul 2015 12:06:00,post received 0 comments
Fact Swimmers Cross Dead Sea for First Time 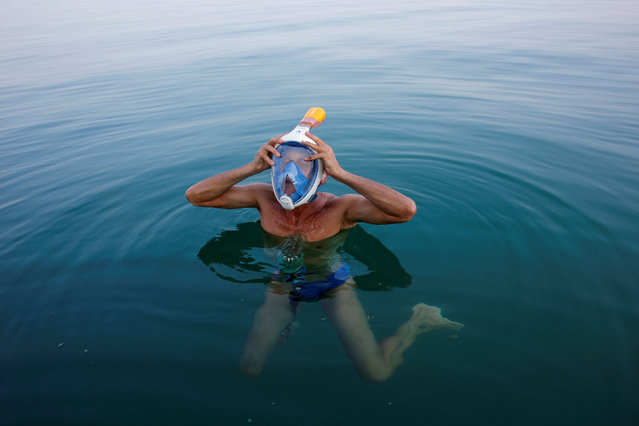 An environmental activist adjusts his mask while taking part in “The Dead Sea Swim Challenge”, swimming from the Jordanian to Israeli shore, to draw attention to the ecological threats facing the Dead Sea, in Kibbutz Ein Gedi, Israel November 15, 2016. Swimmers from around the world plunged into the salty waters of the Dead Sea on Tuesday to attempt a seven-hour swim across the fabled lake in a bid to draw attention to its environmental degradation. Wearing protective masks and snorkels, 25 swimmers paddled through the muddy water to attempt the 9-mile (15-kilometer) swim from Jordan to Israel. (Photo by Nir Elias/Reuters)
Details
16 Nov 2016 10:59:00,post received 0 comments
Fact Day of the Dead 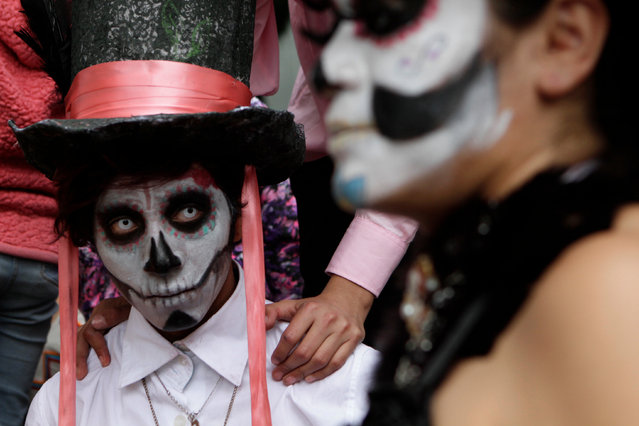 Angel Paz, dressed as a calavera, waits with family for the start of the Gran Procession of the Catrinas, to mark the upcoming Day of the Dead holiday, in Mexico City, Sunday, October 23 2016. (Photo by Anita Baca/AP Photo)
Details
25 Oct 2016 10:19:00,post received 0 comments
Fact “Festival for the Dead” 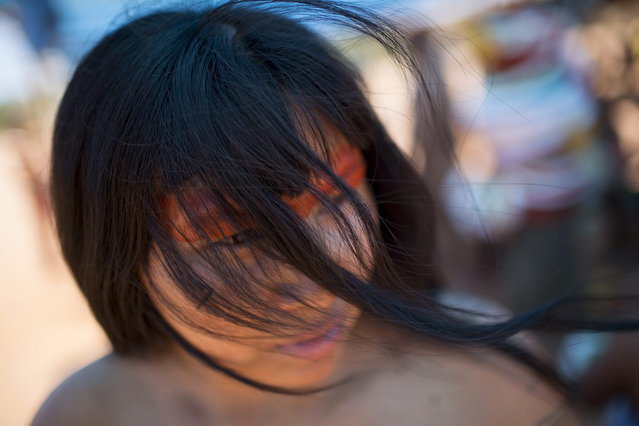 A Waura Indian woman watches the activities of this year's “quarup”, a ritual held over several days to honour in death a person of great importance to them, in Xingu National Park, Mato Grosso State, August 24, 2013. This year the Waura tribe is honouring their late cacique (chief) Atamai, who died in 2012 and helped created the Xingu Park, and his important contribution in facilitating communication between white Brazilians and Indians. (Photo by Ueslei Marcelino/Reuters)
Details
04 Sep 2013 08:48:00,post received 0 comments
Touching Symphony In The Sea 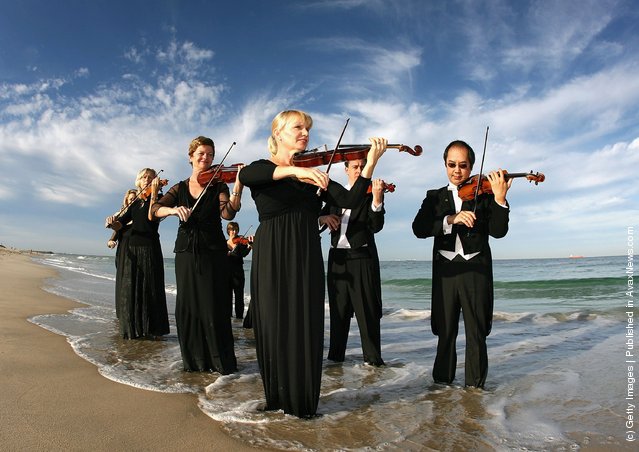 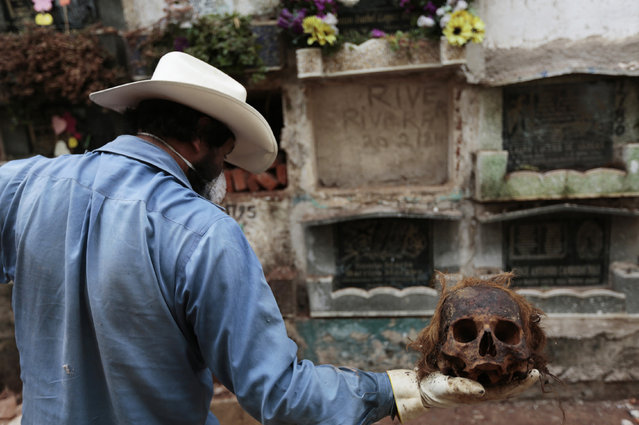 A grave cleaner holds up a skull during exhumation works at the Cemetery General in Guatemala City May 24, 2013. If a lease on a grave has expired or not been paid, grave cleaners will break open the crypts to remove and rebury the bodies. (Photo by Jorge Dan Lopez/Reuters)
Details
21 Sep 2014 11:19:00,post received 0 comments
Popular tags:
All tags
Last searches: