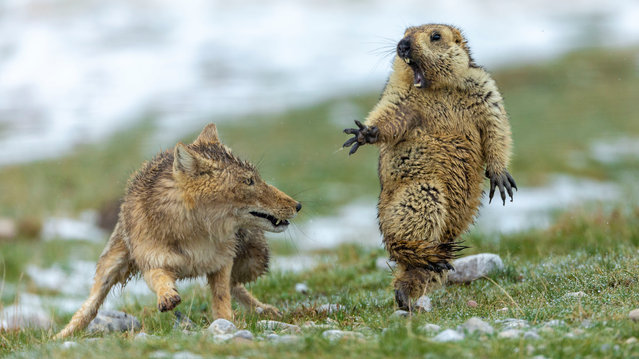 Overall winner, and behaviour – mammals joint winner: The Moment by Yongqing Bao, China. It was early spring in the Qinghai–Tibet plateau, in China’s Qilian mountains. The marmot was hungry. It was still in its winter coat and not long out of its six-month winter hibernation spent underground with the rest of its colony. It had spotted the fox and sounded the alarm to warn its companions, but the fox had not reacted and was still in the same position, so the marmot had ventured out of its burrow. The fox continued to lie still, then suddenly it rushed forward. (Photo by Bao Yongqing/2019 Wildlife Photographer of the Year) 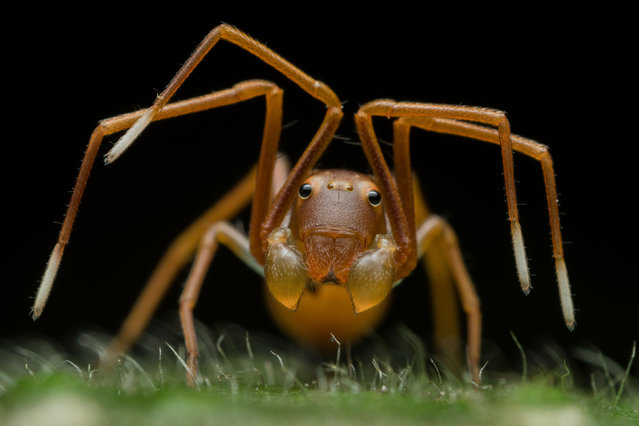 Animal portraits winner: Face of Deception by Ripan Biswas, India .It may look like an ant, but count its legs – and note those pedipalps either side of the folded fangs. Biswas was photographing a red weaver ant colony in the subtropical forest of India’s Buxa Tiger reserve, in West Bengal, when he spotted the odd‑looking ant. On a closer look he realised it was a tiny ant‑mimicking crab spider, just 5mm (1/5 inch) long. Many spider species imitate ants in appearance and behaviour – even smell. This particular spider seemed to be hunting ants in the colony. (Photo by Ripan Biswas/2019 Wildlife Photographer of the Year) 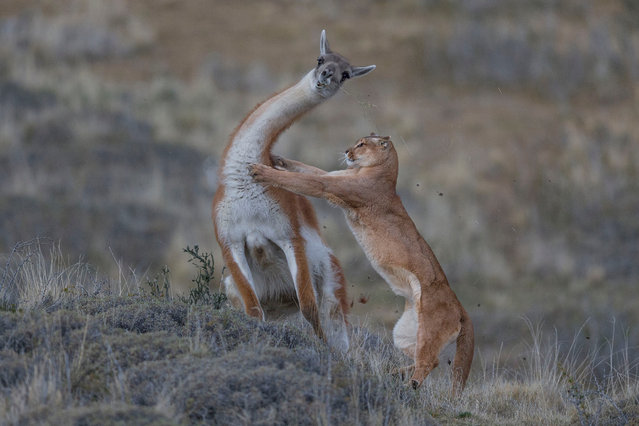 Mammals behaviour joint winner: The Equal Match by Ingo Arndt, Germany. Fur flies as the puma launches its attack on the guanaco. For the photographer, the picture marked the culmination of seven months tracking wild pumas on foot, enduring extreme cold and biting winds in the Torres del Paine region of Patagonia, Chile. (Photo by Ingo Arndt/2019 Wildlife Photographer of the Year) 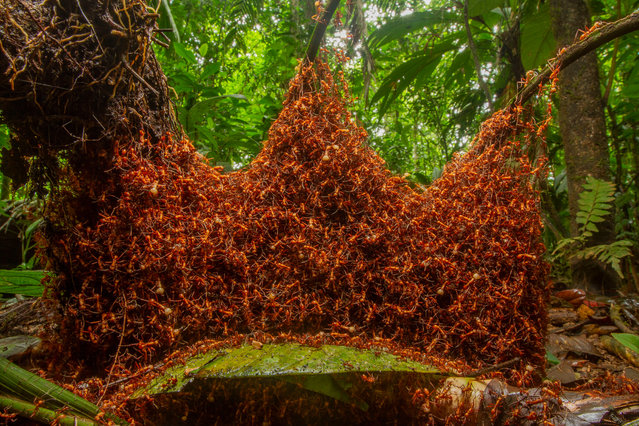 Invertebrates behaviour winner: The Architectural Army by Daniel Kronauer, US. At dusk, Kronauer tracked the colony of nomadic army ants as it moved, travelling up to a quarter of a mile through the rainforest near La Selva biological station, in north-eastern Costa Rica. The ants would use their bodies to build a new daytime nest to house the queen and larvae. They would form a scaffold of vertical chains by interlocking claws on their feet and then create a network of chambers and tunnels into which the larvae and queen would be moved from the last bivouac. (Photo by Daniel Kronauer/2019 Wildlife Photographer of the Year) 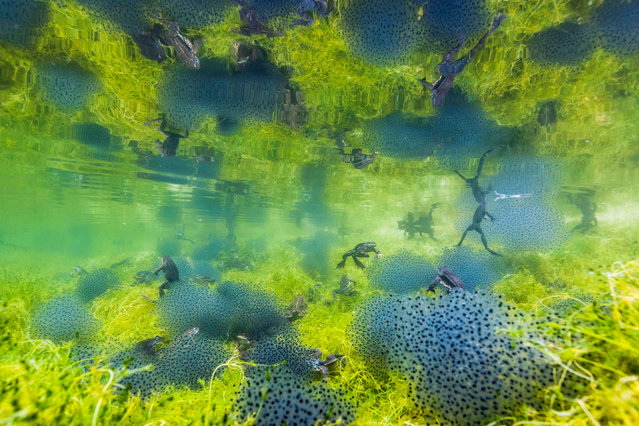 Amphibians and reptiles behaviour winner: Pondworld by Manuel Plaickner, Italy. Every spring, for more than a decade, Plaickner had followed the mass migration of common frogs in South Tyrol, Italy. Rising spring temperatures stir the frogs to emerge from the sheltered spots where they spent the winter (often under rocks or wood, or even buried at the bottom of ponds). They need to breed and head straight for water, usually to where they themselves were spawned. (Photo by Manuel Plaickner/2019 Wildlife Photographer of the Year) 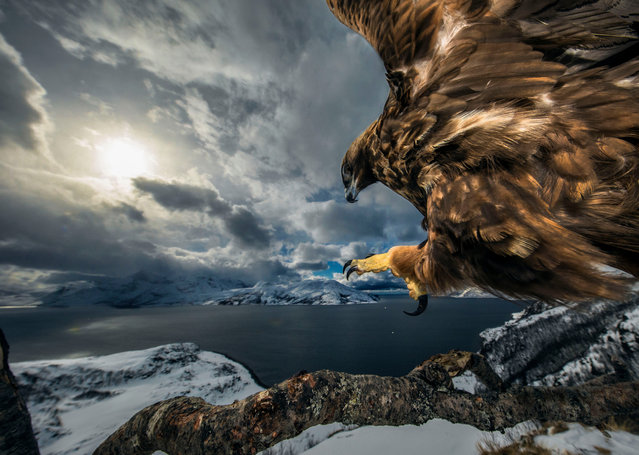 Birds behaviour winner: Land of the Eagle by Audun Rikardsen, Norway. High on a ledge, on the coast near his home in northern Norway, Rikardsen carefully positioned an old tree branch that he hoped would make a perfect golden eagle lookout. To this, he bolted a tripod head with a camera, flashes and motion sensor attached, and built himself a hide a short distance away. From time to time, he left road‑kill carrion nearby. Very gradually – over the next three years – a golden eagle got used to the camera and started to use the branch regularly to survey the coast below. (Photo by Audun Rikardsen/2019 Wildlife Photographer of the Year) 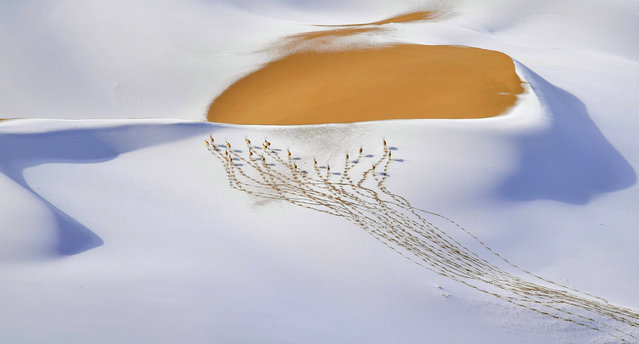 Animals in their environment winner: Snow-Plateau Nomads by Shangzhen Fan, China. A herd of chiru leave a trail on a snow-veiled slope in China’s Altun Shan national nature reserve. These antelopes, to survive at elevations of up to 5,500 metres (18,000ft) have unique underfur – shahtoosh – very light, warm and the main reason for the species’ drastic decline. A million chiru once ranged across this plateau, but commercial hunting left only about 70,000 individuals. Rigorous protection has brought a small increase, but demand for shahtoosh shawls still exists. (Photo by Fan Shangzhen/2019 Wildlife Photographer of the Year) 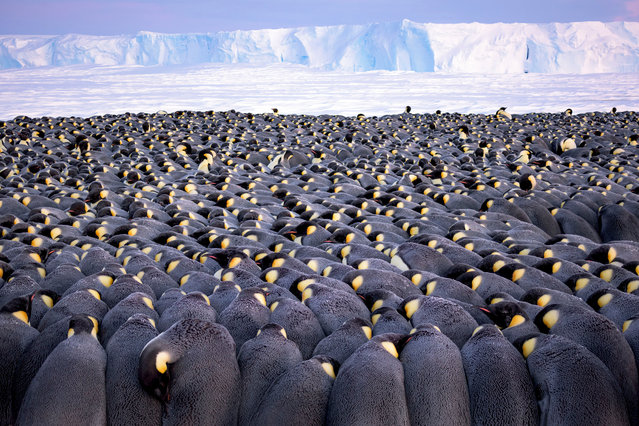 Wildlife Photographer of the Year portfolio award winner: The Huddle by Stefan Christmann, Germany. More than 5,000 male emperor penguins huddle against the wind and late winter cold on the sea ice of Antarctica’s Atka Bay, in front of the Ekström ice shelf. Each paired male bears a precious cargo on his feet – a single egg – tucked under a fold of skin as he faces the harshest winter on Earth. The females entrust their eggs to their mates to incubate and then head for the sea, where they feed for up to three months. (Photo by Stefan Christmann/2019 Wildlife Photographer of the Year) 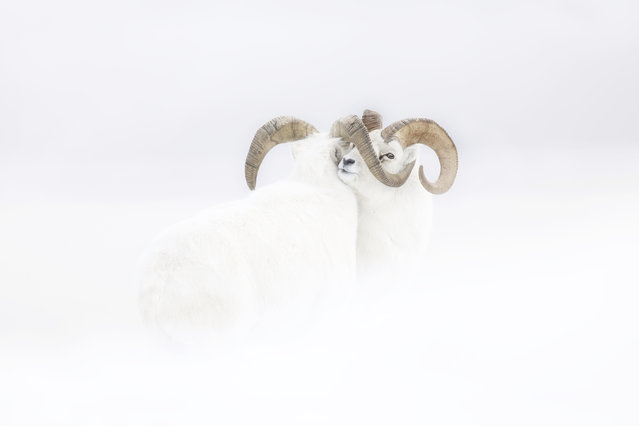 Rising star portfolio award winner: Frozen Moment by Jérémie Villet, France. Pushing against each other, two male Dall sheep in full winter-white coats stand immobile at the end of a fierce clash on a windswept snowy slope in Yukon, Canada. (Photo by Jérémie Villet/2019 Wildlife Photographer of the Year) 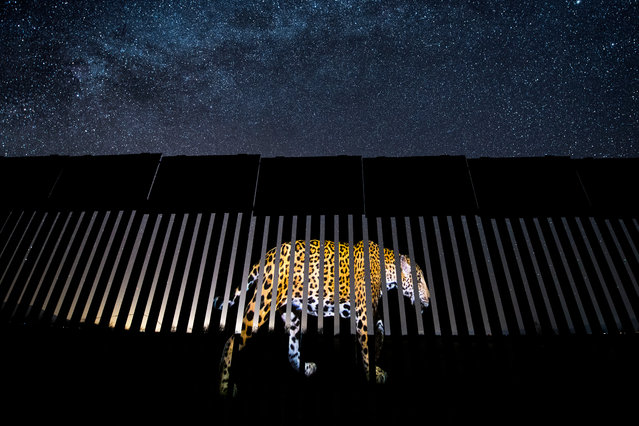 Wildlife photojournalism, single image winner: Another Barred Migrant by Alejandro Prieto, Mexico. An image of a jaguar is projected on to a section of the US-Mexico border fence – symbolic, says Alejandro, of the jaguars’ past and future existence in the US. Today, the jaguar’s stronghold is in the Amazon, but historically, the range of this large cat included the south-west US. Over the past century, human impact has resulted in the virtual extinction of the species in the US. Two male jaguars are known to inhabit the borderlands of New Mexico and Arizona. (Photo by Alejandro Prieto/2019 Wildlife Photographer of the Year) 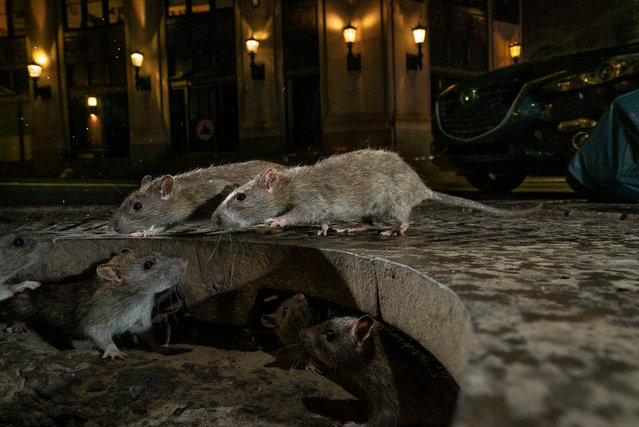 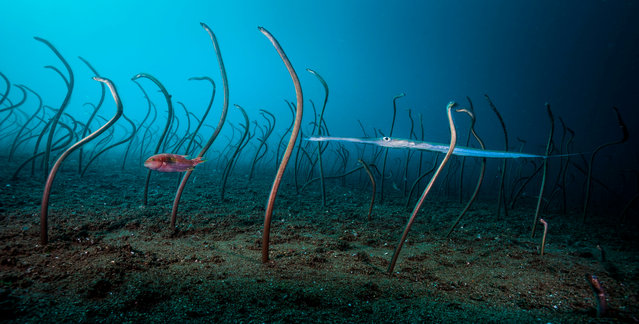 Under water winner: The Garden of Eels by David Doubilet, US. The colony of garden eels was one of the largest Doubilet had ever seen, at least two-thirds the size of a football field, stretching down a steep sandy slope off Dauin, in the Philippines – a cornerstone of the coral triangle. (Photo by David Doubilet/2019 Wildlife Photographer of the Year) 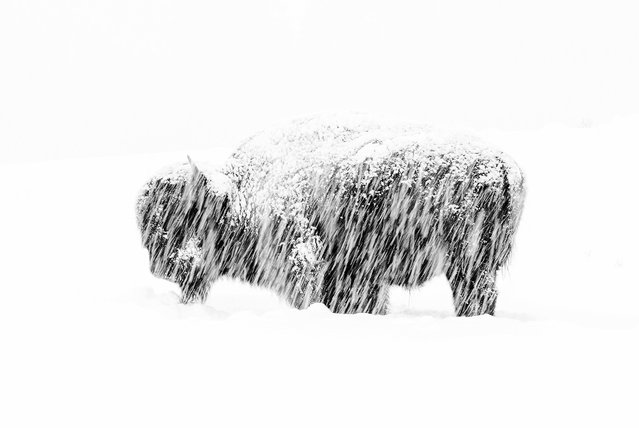 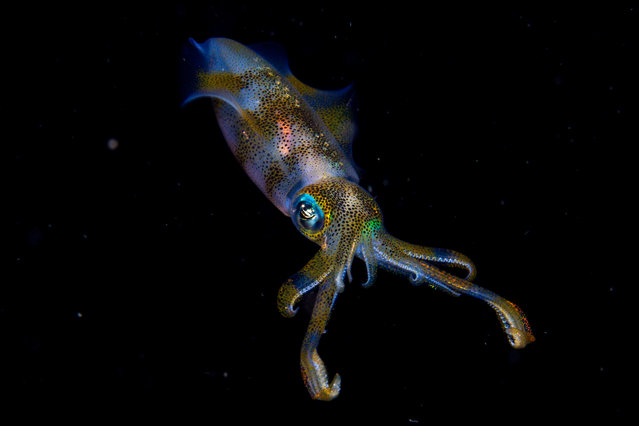 Young wildlife photographer of the year and 11-14 years winner: Night Glow by Cruz Erdmann. Erdmann was on an organised night dive in the Lembeh strait off North Sulawesi, Indonesia. It was here where he encountered the pair of bigfin reef squid. They were engaged in courtship, involving a glowing, fast‑changing communication of lines, spots and stripes of varying shades and colours. One immediately jetted away, but the other – probably the male – hovered just long enough for Cruz to capture one instant of its glowing underwater show. (Photo by Cruz Erdmann/2019 Wildlife Photographer of the Year) 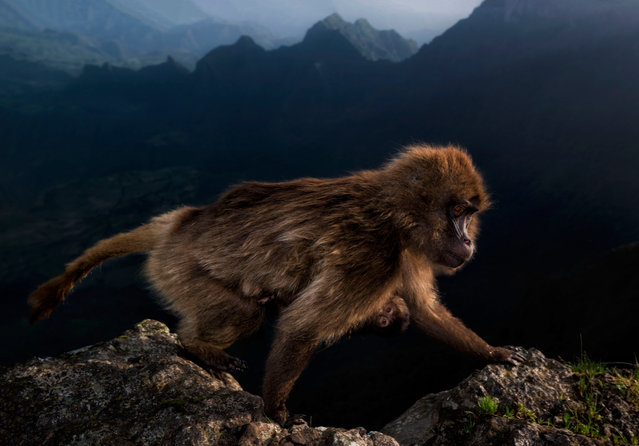 15-17 years category winner: Early Riser by Riccardo Marchegiani, Italy. Marchegiani could not believe his luck when, at first light, this female gelada, with a week-old baby clinging to her belly, climbed over the cliff edge close to where he was perched. He was with his father and a friend on the high plateau in Ethiopia’s Simien mountains national park, there to watch geladas – a grass‑eating primate found only on the Ethiopian plateau. At night, the geladas would take refuge on the steep cliff faces, huddling together on sleeping ledges, emerging at dawn to graze on the alpine grassland. (Photo by Riccardo Marchegiani/2019 Wildlife Photographer of the Year)
Edit Del
17 Oct 2019 00:03:00, post received 0 comments
Publication archive:
←   →
Popular tags:
All tags
Last searches: