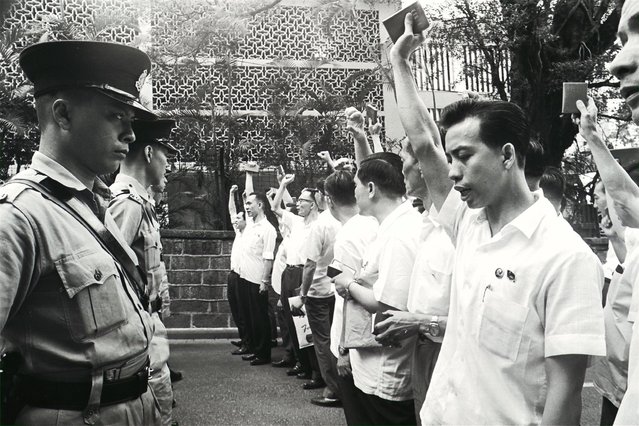 In this photograph received from the South China Morning Post (SCMP) archive on May 2, 2017 and taken on May 16, 1967, protesters (R) wave the Little Red Book “The Quotations from Chairman Mao Zedong” in front of police outside the South Kowloon Magistracy in Hong Kong. Hong Kong is unrecognisable now from the city which 50 years ago was the scene of bloody riots, fuelled by resentment of colonial rule and inspired by the Cultural Revolution unfolding in China. But although memories of the bomb-strewn chaos of 1967 have faded, the city is facing a new era of turbulence as democracy activists take on Beijing and many ordinary residents still struggle to make ends meet. (Photo by AFP Photo/SCMP) 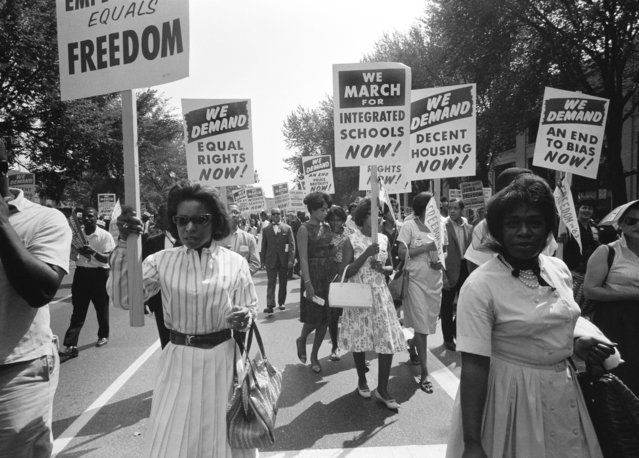 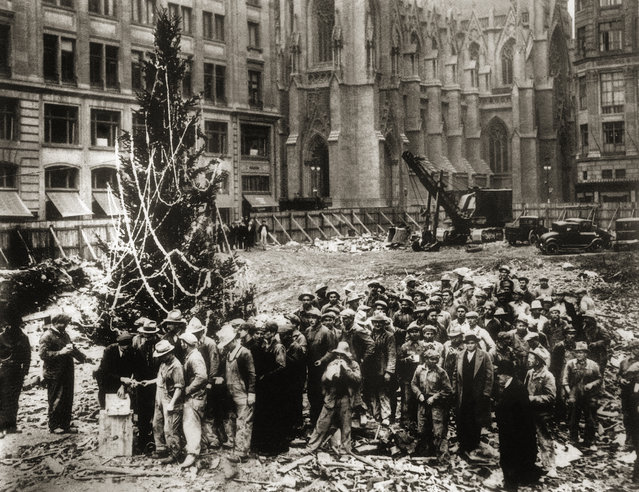 Construction workers line up for pay beside the first Rockefeller Center Christmas tree in New York in 1931. The Christmas tree went on to become an annual tradition and a New York landmark. St. Patrick's Cathedral is visible in the background on Fifth Avenue. (Photo by AP Photo) 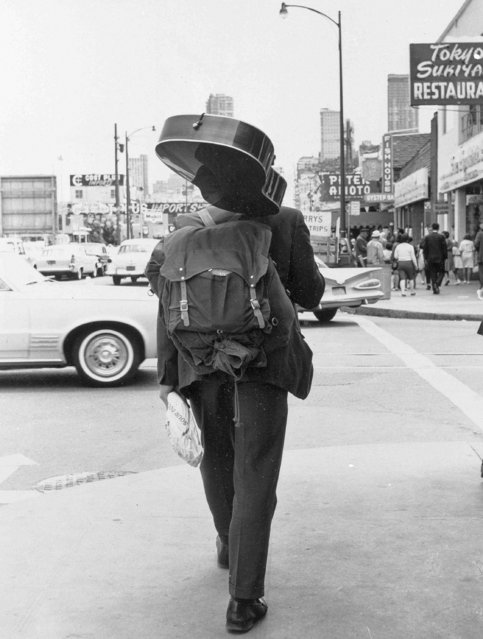 In this October 16, 1967, file photo, a man carries a guitar, a loaf of bread and a knapsack as he walks down the street away from the Haight-Ashbury district of San Francisco. (Photo by AP Photo) 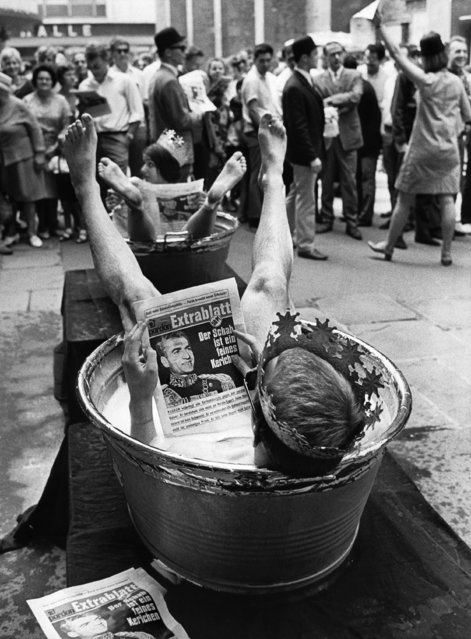 Protesters sit in bath tubs and read copies of an “Extrablatt” (Special Issue) of the satirical newspaper “Pardon” during an event organized by “Pardon” on August 3, 1967 in Frankfurt, Germany. Activists criticize the demands of the Shah of Persia that Shah opponents in Germany should be punished. The bath tubs are a mock up of the golden tubs that where allegedly given as present to the Shah and his wife by the German Government. (Photo by AP Photo) 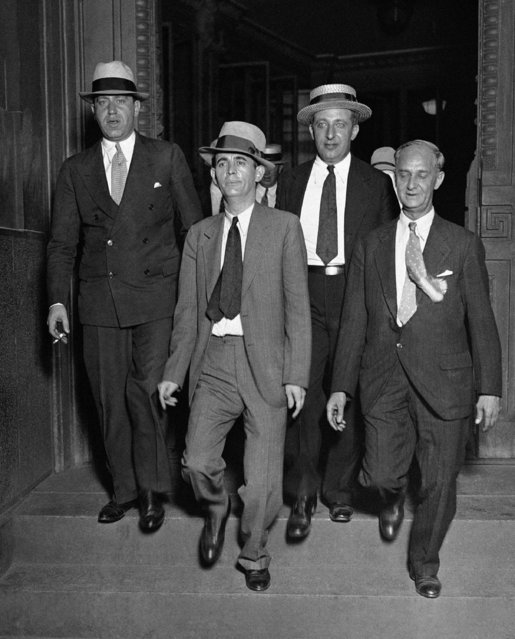 Jack “Legs” Diamond, center, and his attorneys, leaving the Federal Court in New York on August 8, 1931, after his conviction of owning an unlicensed still and conspiring to violate the prohibition law. The jury deliberated slightly more than two hours before returning its verdict. Under the terms of the law Diamond is subject to maximum sentence of four years in federal prison and a combined fine of $11,000. (Photo by AP Photo) 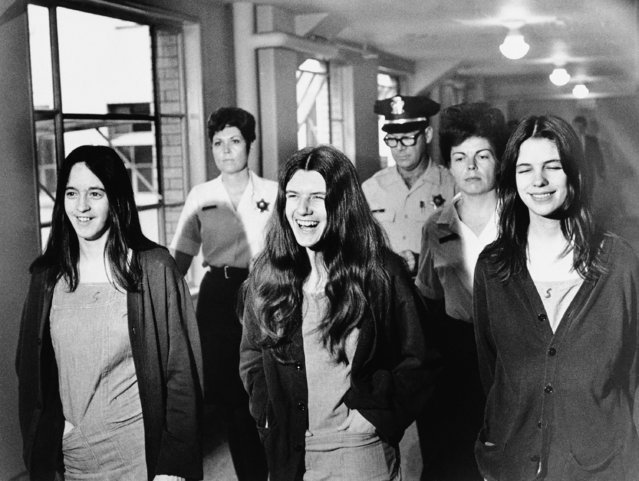 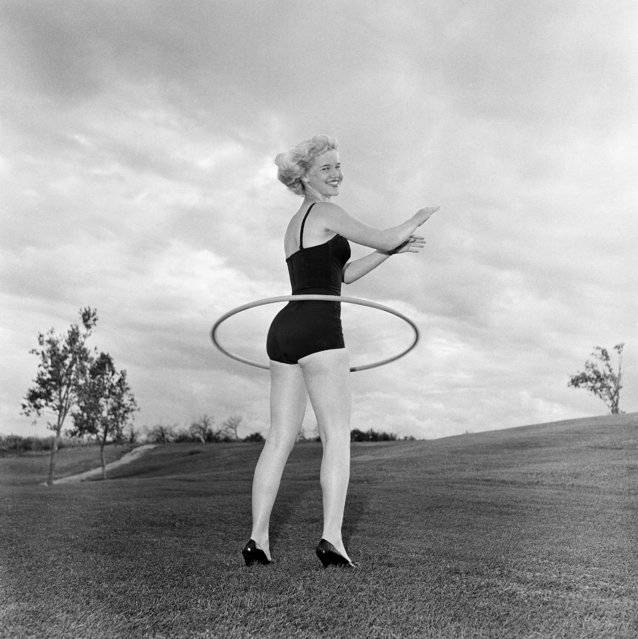 Model Fay Shott spins one of the new plastic Hula Hoops around her waist in Denver; Colo., on August 24, 1958. The hoops are currently popular with the younger crowd. (Photo by John F. Urwiller/AP Photo) 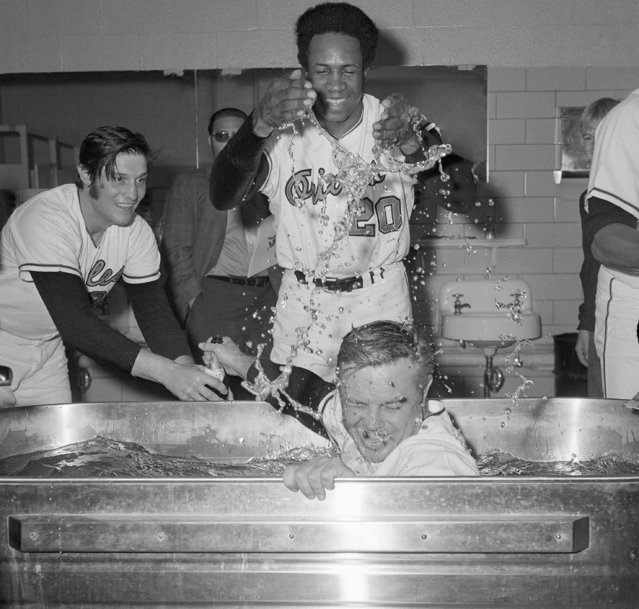 In this October 6, 1970, file photo, Frank Robinson, center rear, splashes water on Baltimore Orioles manager Earl Weaver as the Orioles celebrate sweeping the the Minnesota Twins to win the American League championship, in the clubhouse in Baltimore. Weaver’s Orioles were at their peak from 1969-71, when they won 109, 108 and 101 games. (Photo by AP Photo) 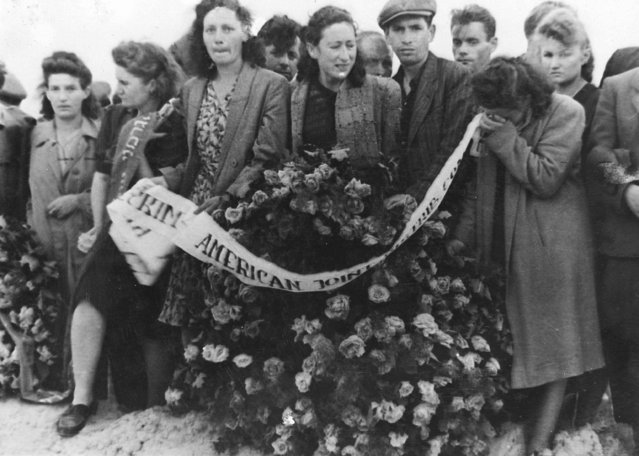 Using the end of the ribbon of a wreath, sent by the American Joint Distribution Committee, to dry her eyes an unidentified woman, right, July 19, 1946, mourns her husband, one of 41 persons killed July 4, 1946 at Kielce in Poland's bloodiest post-war pogron. (Photo by AP Photo) 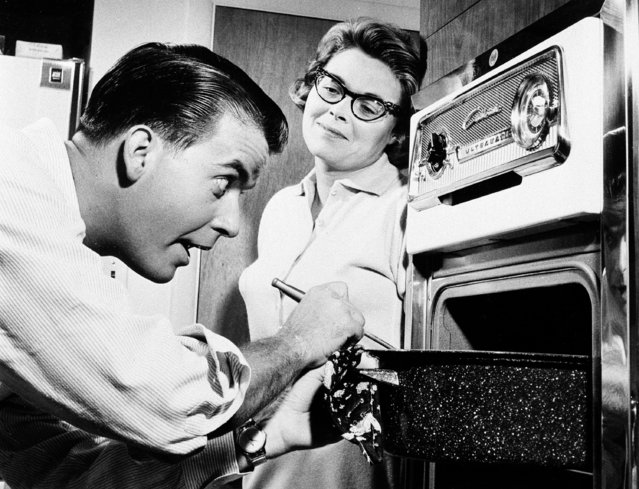 As his wife Barbara Mallery looks on Dick Clark does a bit of kitchen policing at their new suburban home near Philadelphia, PA., July 26, 1960. (Photo by AP Photo) 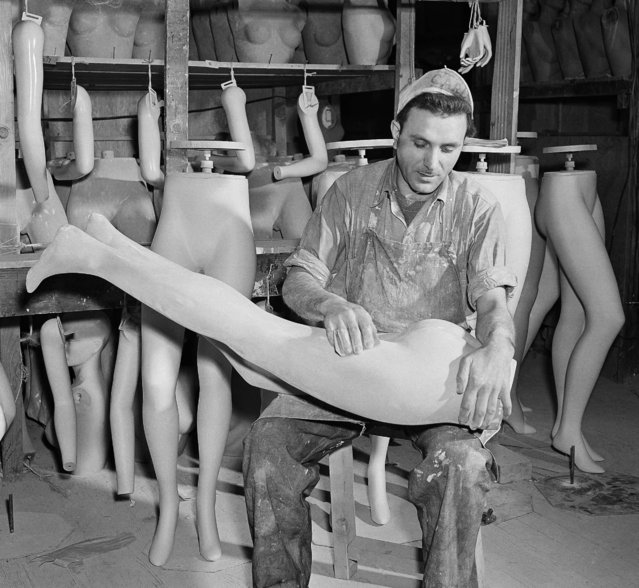 An employee of the David Goldsmith factory sandpapers the curves of a mannequin before applying a coat of paint in New York, July 7, 1942. David Goldsmith operates a factory which makes realistic window models of pretty girls for the display of clothing and hats. That in itself is not unusual, but when he places the nude figures in his show window for all the world to see, he invites the wrath of reformers and the curious stares of passersby. During the Lindbergh baby kidnapping case, he was almost arrested by policemen at the George Washington Bridge. They stopped his car and in a routine search uncovered the plaster model of a blonde-haired boy. One of them mistook the model for the Lindbergh baby and with a drawn gun collared Goldsmith. (Photo by Bob Wands/AP Photo) 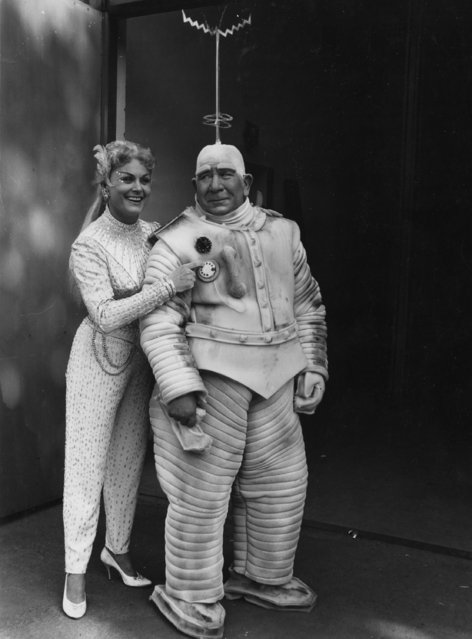 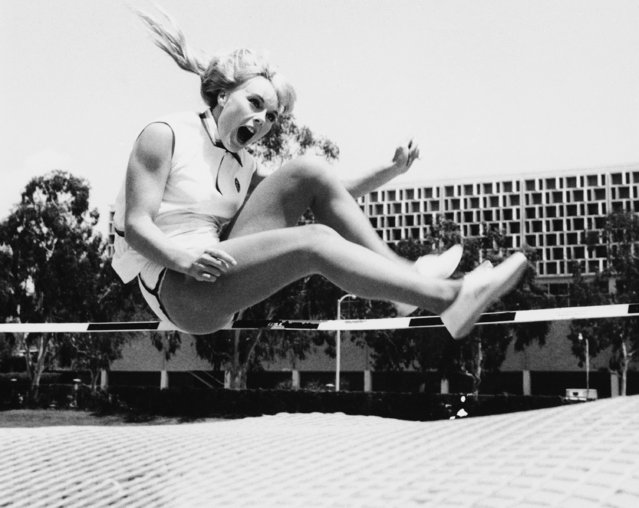 Giving out with a yell, Elke Sommer is tossed on the trampoline as she trains for her movie role as an athlete, on the playing field of the University of California at Los Angeles, June 8, 1967. (Photo by AP Photo) 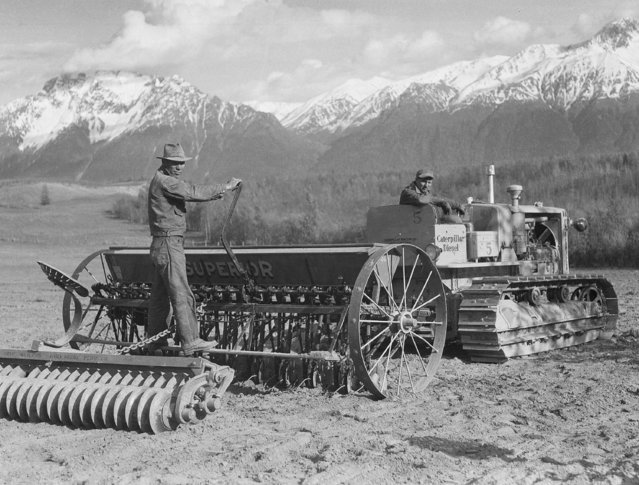 Johan Johnson, left, on the seeder, and Arthur Hack on the tractor, both Matanuska settlers from Minnesota, are shown seeding their new farm with oats in this Alaska valley, June 16, 1935. In the background are the snow-covered mountains of the Chugach range. (Photo by AP Photo) 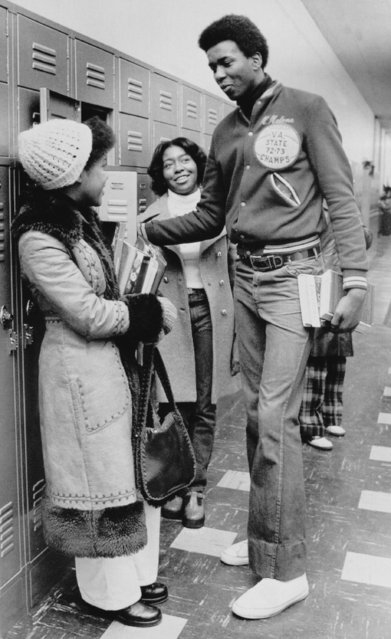 Moses Malone, the most heavily recruited high school basketball player in the country, signed a grant-in-aid to attend the University of Maryland. Malone is shown here talking with classmates at Petersburg High School in Petersburg, Virginia, June 20, 1974. (Photo by AP Photo) 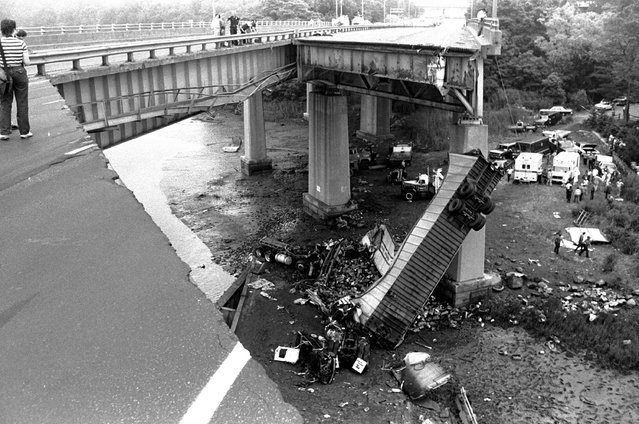 A 100-foot-long section of the Interstate 95 bridge spanning the Mianus River in Greenwich, CT, collapsed June 29, 1983. Three people were killed and three were seriously injured when their vehicles plunged 70 feet to the river. (Photo by Bob Child/AP Photo) 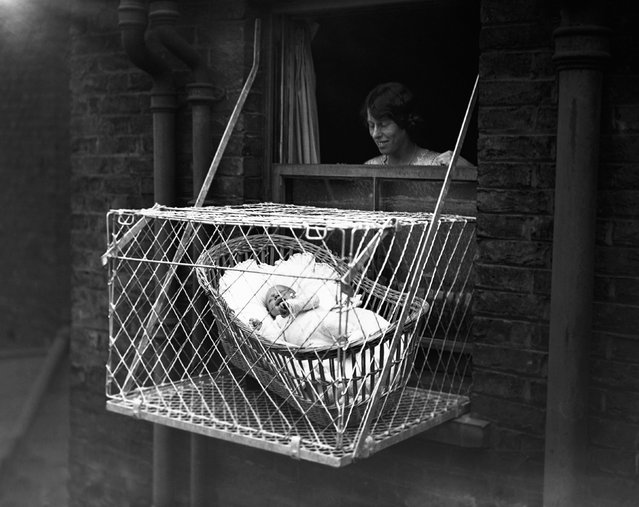 Baby in cage hung out of window, circa 20s. (Photo by Hulton-Deutsch Collection/CORBIS/Corbis via Getty Images) 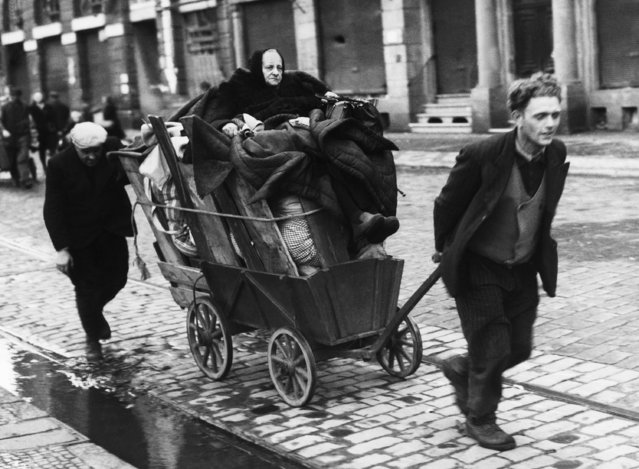 Grandmother sits on top of the household goods in France on November 23, 1944, as a French family return to their home after the liberation of Metz. (Photo by AP Photo) 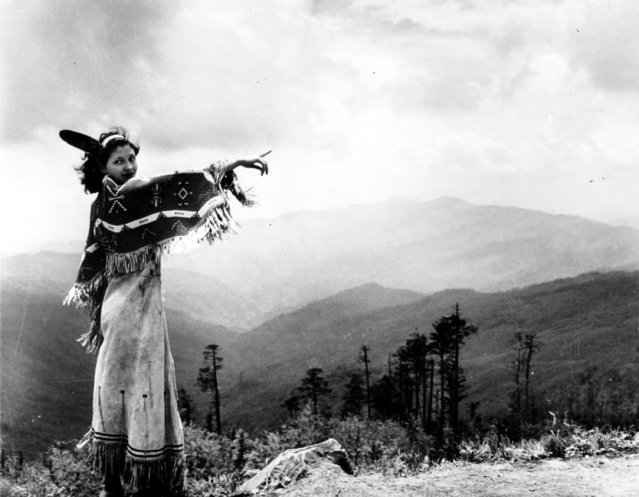 A Cherokee woman points to the rugged Smokey Mountains of North Carolina on November 30, 1942. She is a graduate of a modern school and the granddaughter of a Cherokee Chief. (Photo by AP Photo) 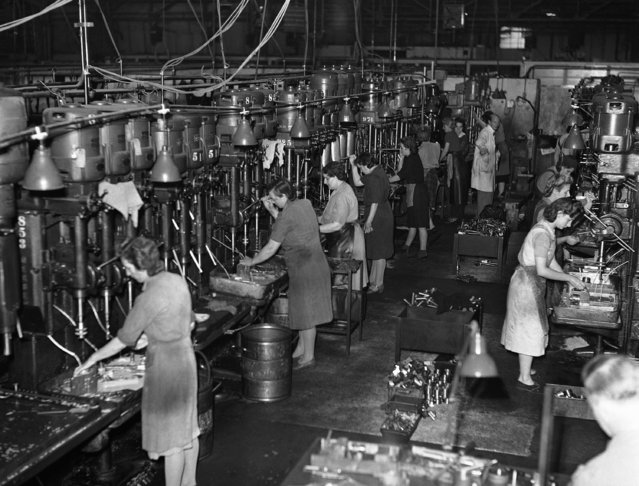 A row of women workers handling B 13 drills, and all of them are working on the Oerlikon main mechanism, at an armaments factory somewhere in England on October 12, 1943. (Photo by AP Photo) 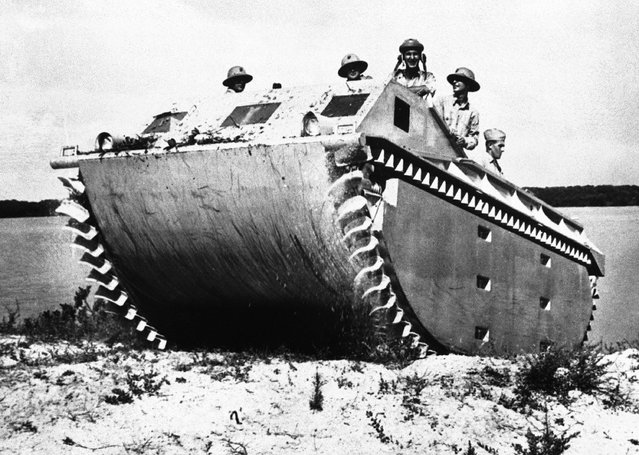 The new U.S. Roebling amphibian tank, emerging from the gulf of Mexico after being tested by U.S. marines on October 18, 1941. It can be used as easily in water as on land and, say the U.S. marines who tested it, “will turn on a dime”, so fine are its maneuvering powers. (Photo by AP Photo) 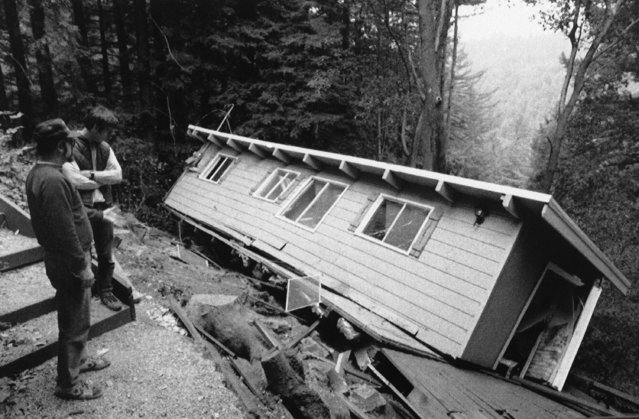