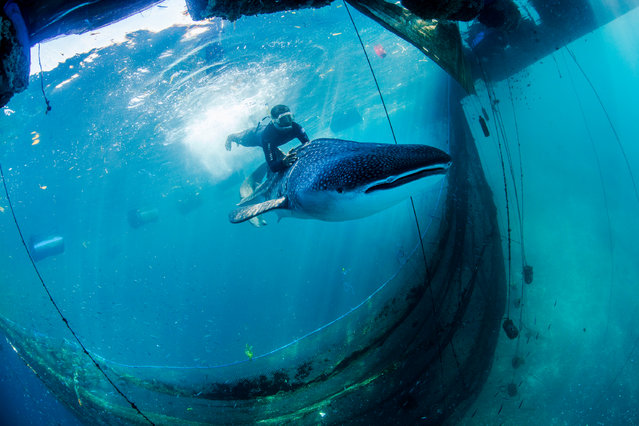 Whale sharks – illegally captured for sale to ocean theme parks in China – are released from sea pens, Ambon, Indonesia on May 29, 2016. Agents of the Ministry of Fisheries and Maritime Affairs found two whale sharks, each about 14 feet long, being held in submerged pens. Even fully grown, the sharks are harmless, slow-moving fish, typically swimming with mouths agape to filter-feed on plankton. Divers entered the pens and guided the sharks, which had been held for three months, back to freedom. (Photo by Paul Hilton for WCS) 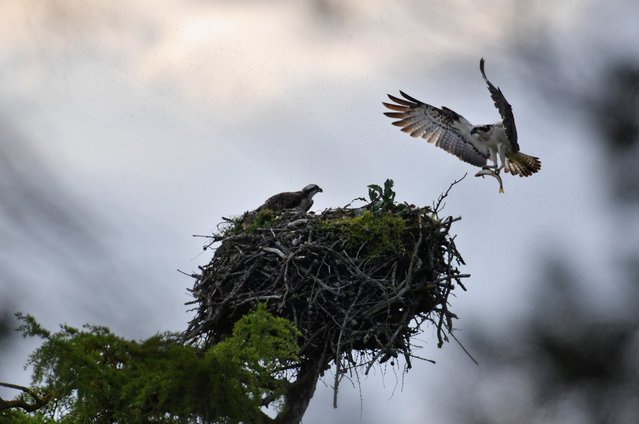 An Osprey brings a fish back to a nest at Loch Insh on June 6, 2016 in Kincraig, Scotland. Ospreys migrate each spring from Africa and nest in tall pine trees around the Aviemore area, the raptor was hunted to the point of extinction in the Victorian era, their migratory habits eventually brought them back to Scotland with the first successful breeding pair being recorded in 1954. (Photo by Jeff J. Mitchell/Getty Images) 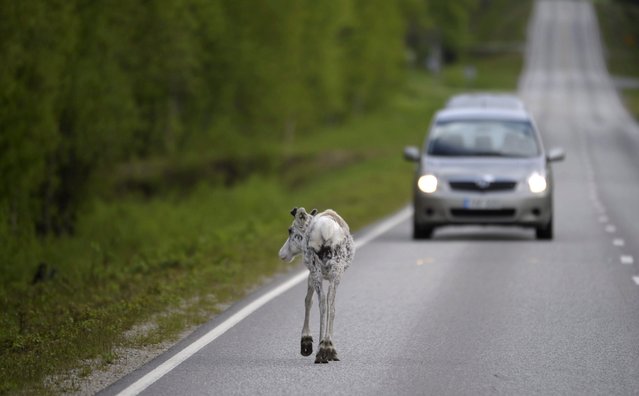 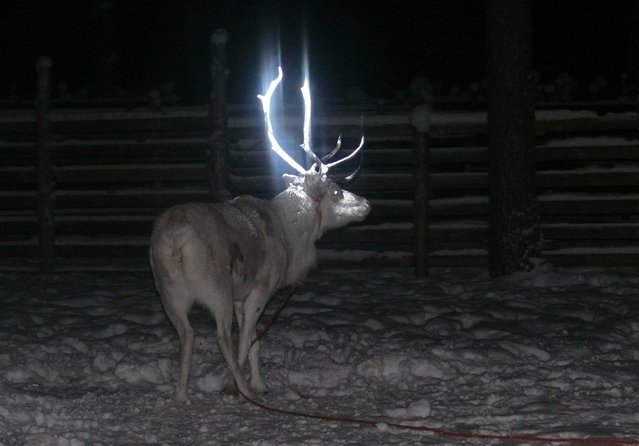 Fluorescent paint makes the antlers of a reindeer shine, in this photo dated February 15, 2014, after Finnish herders painted the animal in an attempt at halting the thousands of road deaths of the roaming caribou in Rovaniemi, the wilds of Finland's Lapland. This novel attempt to reduce the annual 4,000 reindeer road deaths was not successful, so in a pilot project announced Wednesday June 8, 2016, drivers of heavy transport vehicles are being offered a reindeer warning app for their mobile devices, to warn them of nearby reindeer. If successful, The Reindeer Herders Association hope the app will be available for download on all smart phones later in 2016. (Photo by Anne Ollila/Lehtikuva via AP Photo) 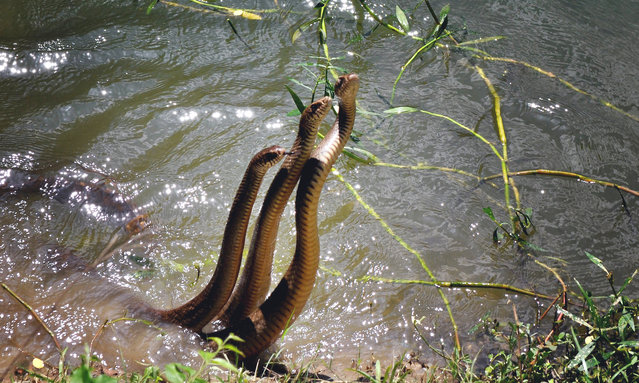 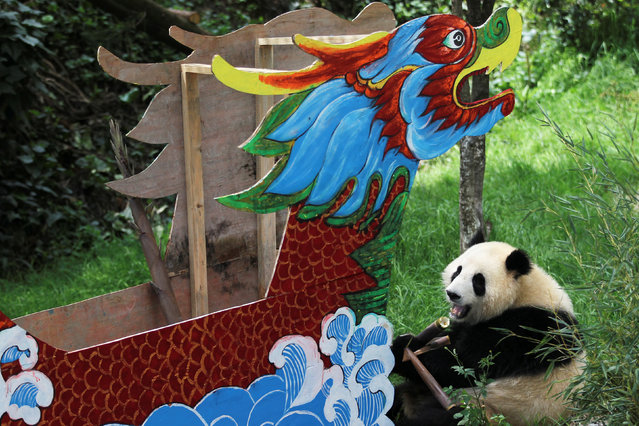 A giant panda eats bamboos beside a model of a dragon boat at a zoo ahead of China's annual dragon boat festival in Kunming, Yunnan Province, China, June 6, 2016. (Photo by Wong Campion/Reuters) 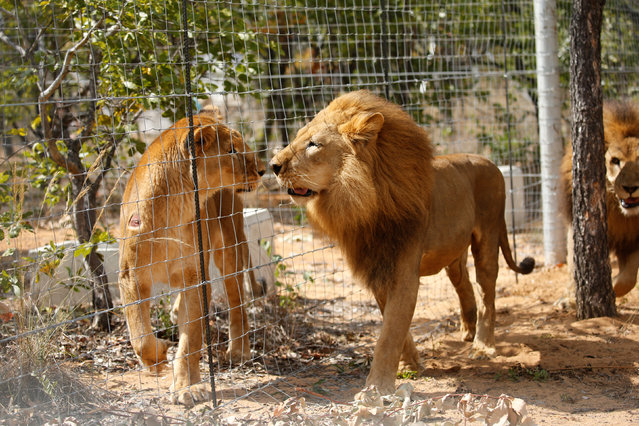 Some of the 33 lions rescued from circuses in Peru and Columbia are seen after being released at their final destination at the Emoya Big Cat Sanctuary, outside Vaalwater in South Africa's northern Limpopo province, May 1, 2016. (Photo by Siphiwe Sibeko/Reuters) 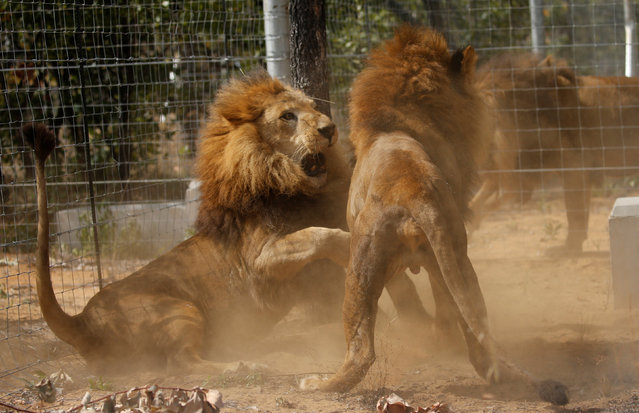 Some of the 33 lions rescued from circuses in Peru and Columbia are seen as they fight after being released at their final destination at the Emoya Big Cat Sanctuary, outside Vaalwater in South Africa's northern Limpopo province, May 1, 2016. (Photo by Siphiwe Sibeko/Reuters) 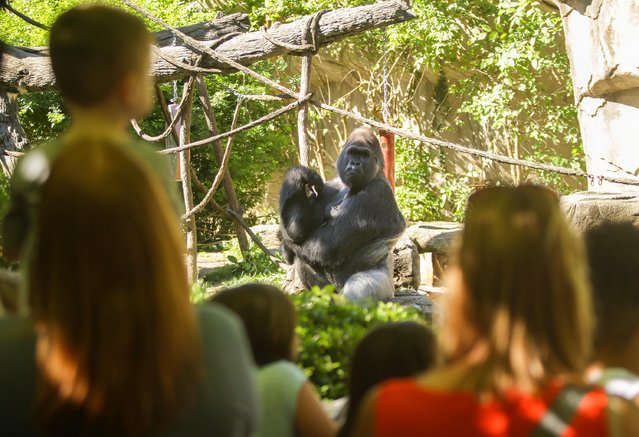 The Cincinnati Zoo's Gorilla World exhibit reopens after a boy tumbled into its moat May 28 and officials were forced to kill Harambe, a Western lowland gorilla, in Cincinnati, Ohio, U.S. June 7, 2016. (Photo by William Philpott/Reuters) 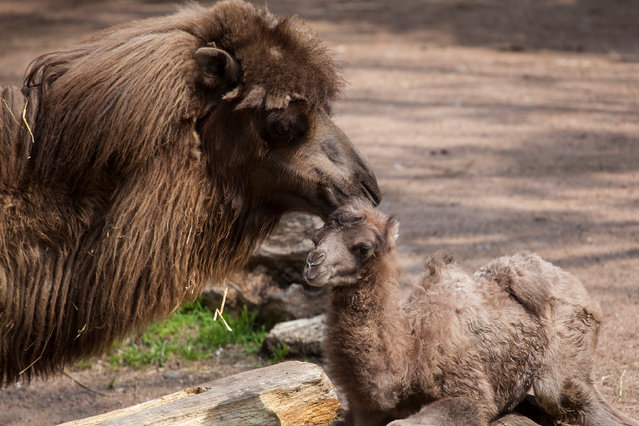 Bactrian camel named Alexander Camelton is seen with his mother at the Lincoln Park Zoo in Chicago, Illinois, U.S. May 18, 2016. (Photo by Christopher Bijalba/Reuters/Lincoln Park Zoo) 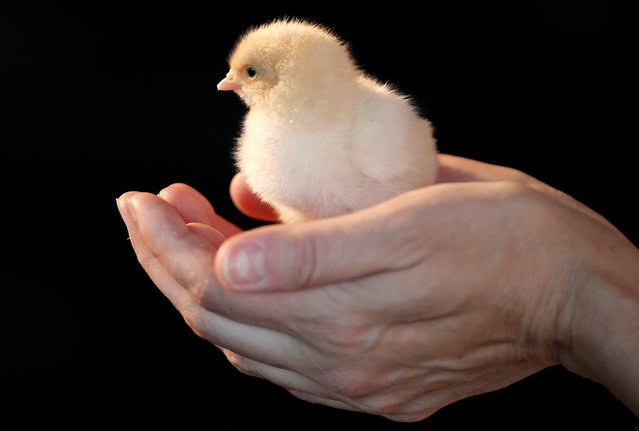 A man holds a chick as billionaire philanthropist and Microsoft's co-founder Bill Gates (unseen) speaks to the media in front of a chicken coop set up on the 68th floor of the 4 World Trade Center tower in Manhattan, New York, U.S., June 8, 2016, while announcing that he is donating 100,000 chicks with the goal of ending extreme poverty. (Photo by Mike Segar/Reuters) 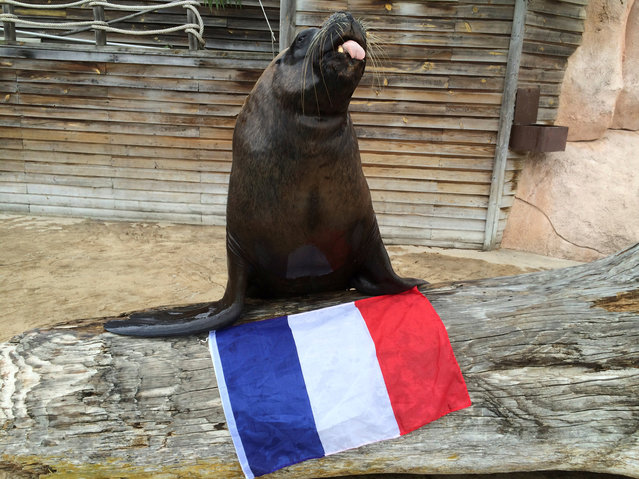 Watson the sea-lion poses with a French flag at the Amneville Zoo near Metz, France, June 20, 2014, in this handout photo provided by the zoo on June 10, 2016. (Photo by Reuters/Zoo Amneville) 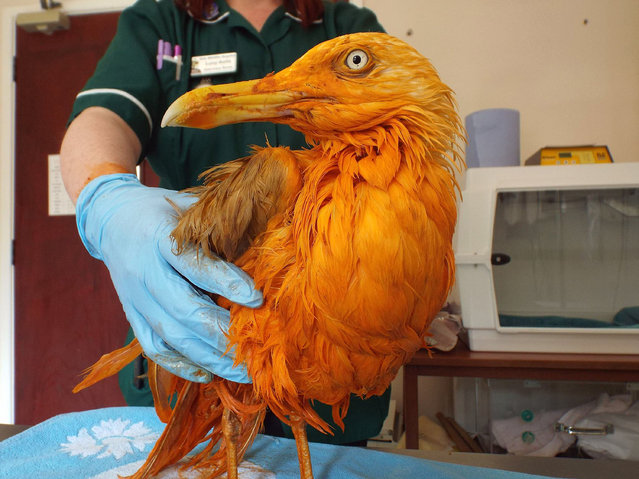 A seagull who turned bright orange after he plunged into a vat of chicken tikka masala in Beckford, England on June 9, 2016. The bird fell into a container of the food while trying to scavenge a piece of meat from a food factory bin in Wales. (Photo by Vale Wildlife Hospital/PA Wire) 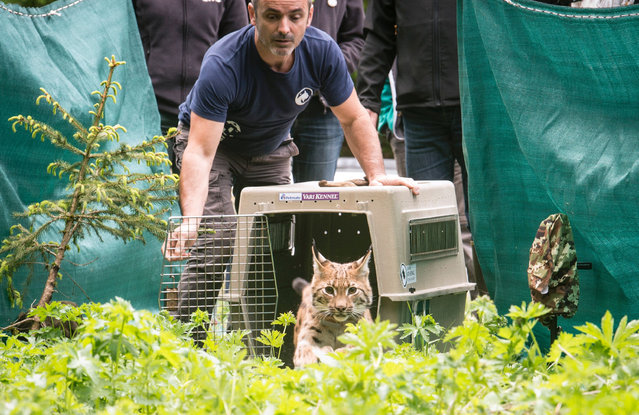 A member of the Athenas centre opens a cage to release a lynx into the wild, on May 31, 2016 in L'etoile, eastern France. Two one-year-old lynx were released in the massif du Jura, on May 31 and June 1, 2016. (Photo by Sebastien Bozon/AFP Photo) 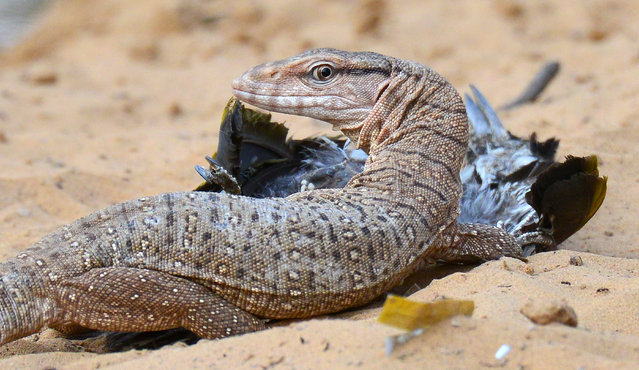 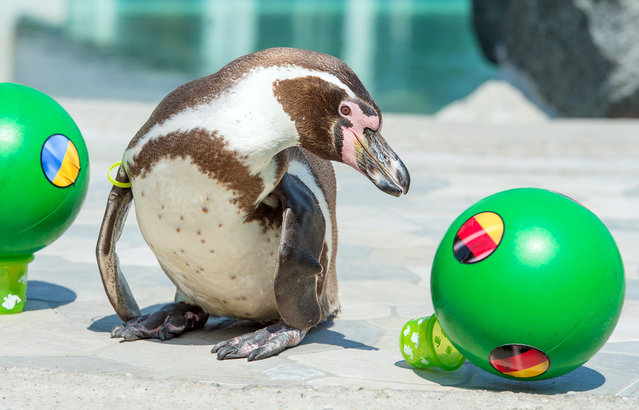 Humboldt penguin “Flocke”, who lives in the swimming bath 'Spreewelten-Bad' in Luebbenau, prods the ball with the German flag from its plinth in Luebbenau, Germany, 08 June 2016. “Flocke” is the UEFA EURO 2016 oracle of the Spreewelten-Bad and has predicted a victory of Germany against Ukraine. The UEFA EURO 2016 soccer championship takes place from 10 June to 10 July 2016 in France. (Photo by Patrick Pleul/EPA) 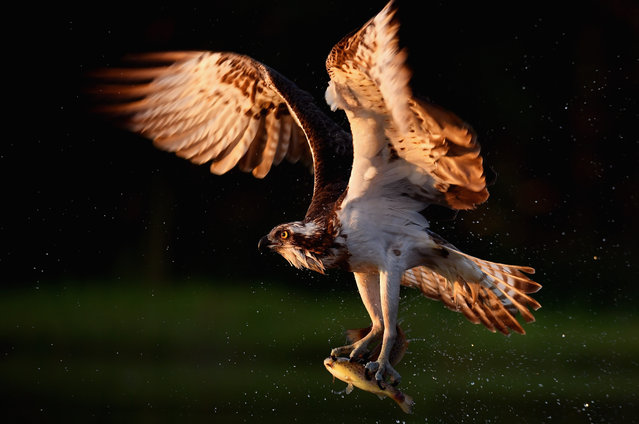 An Osprey catches two Rainbow Trout at Rothiemurchus on June 6, 2016 in Kincraig, Scotland. Ospreys migrate each spring from Africa and nest in tall pine trees around the Aviemore area, the raptor was hunted to the point of extinction in the Victorian era, their migratory habits eventually brought them back to Scotland with the first successful breeding pair being recorded in 1954. (Photo by Jeff J. Mitchell/Getty Images) 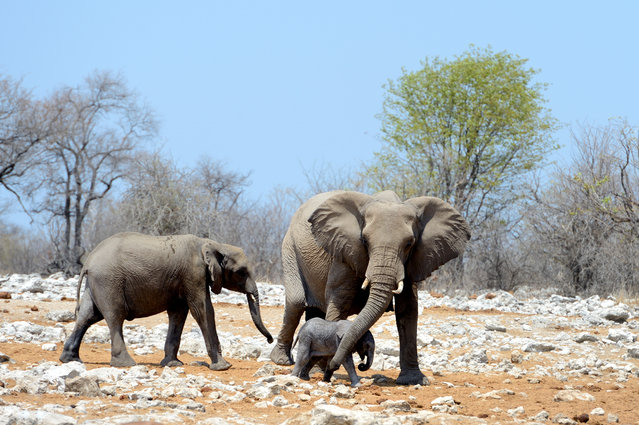 A herd of elephants searches for a waterhole to cool down in Etosha, Namibia on June 7, 2016. (Photo by Eric Baccega/Barcroft Media) 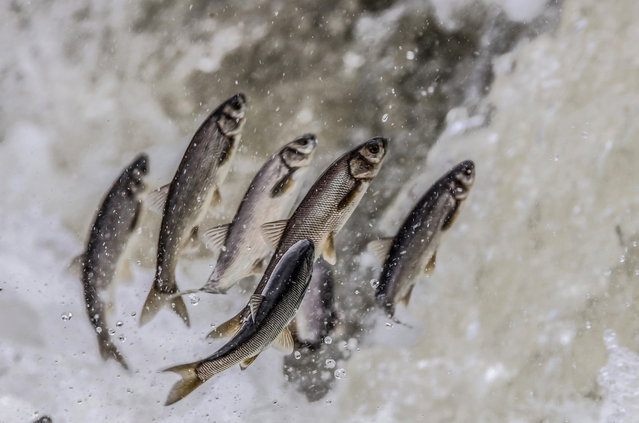 Pearl mullets are seen over the water at the Lake Van in Van, Turkey on June 6, 2016. The pearl mullet which live in alkaline, salty water in Lake Van must resist seagulls as they migrate to freshwater. The seagulls that live on the shores of Lake Van feed by hunting the fish migrating to freshwater to breed. (Photo by Ali Ihsan Oztuk/Anadolu Agency/Getty Images) 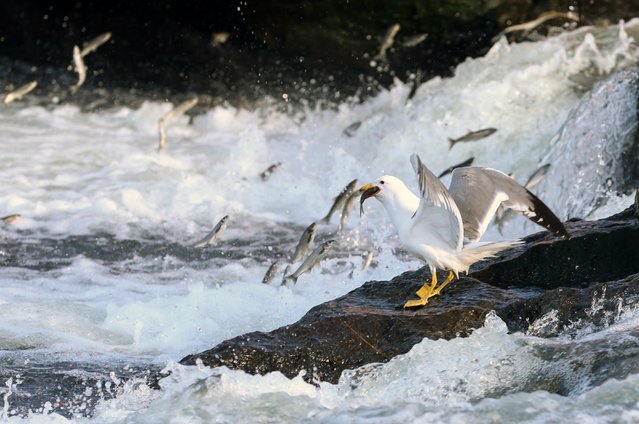 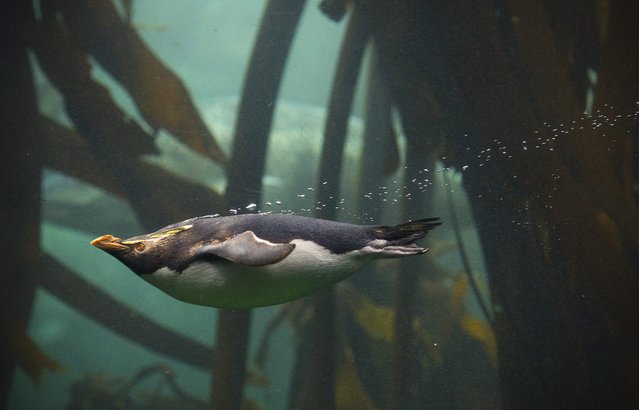 A Penguin dives at the Two Oceans Aquarium in Cape Town, South Africa, 01 June 2016. The Two Oceans Aquarium is the largest in Africa. Certified as a member of the Heritage Environmental Rating Programme the aquarium is in the process of revamping with new exhibits to be launched on 16 June 2016. Committed to sustainability and education the aquarium regularily hosts school tours as one of their many educational programs. (Photo by Nic Bothma/EPA) 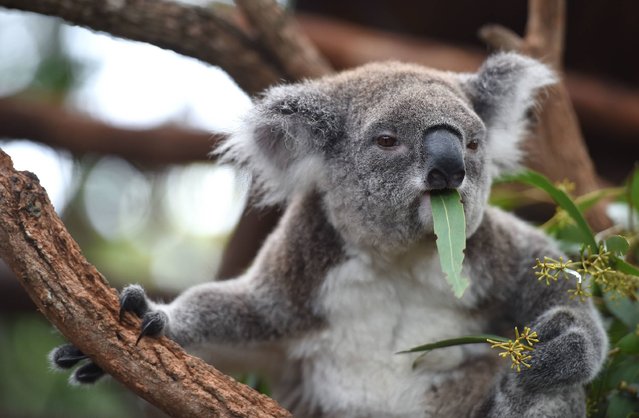 In this photo taken on April 28, 2016, a koala who goes by the name of Ocean Summer who is blind from brain damage resides at the Koala Hospital in Port Macquarie. The outlook for koala populations on Australia's east coast is dire as habitat loss, dog attacks, car strikes, climate change and disease take their toll. While there were believed to be more than 10 million koalas before British settlers arrived in 1788, a 2012 national count placed their total numbers at around 330,000, though their existence in treetops makes accurate assessment difficult. (Photo by Peter Parks/AFP Photo) 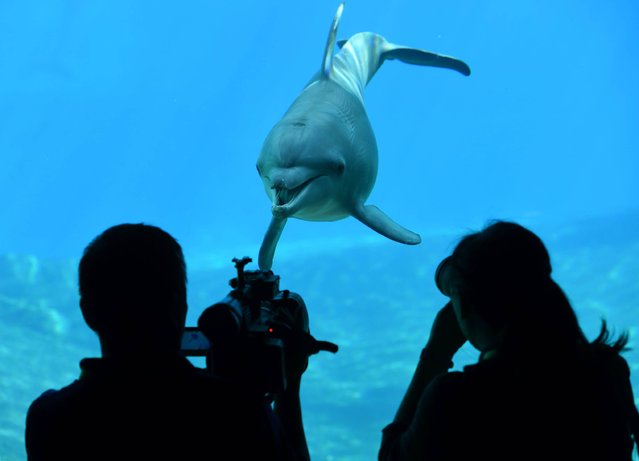 People take photograph and film a dolphin swimming inside its enclosure at the Resort World Sentosa's S.E.A Aquarium in Singapore on June 7, 2016. As part of global celebration for World Oceans Day, S.E.A Aquarium will launch a 10-day conservation themed activities from June 17 to 26 in raising awareness on protecting oceans. (Photo by Roslan Rahman/AFP Photo) 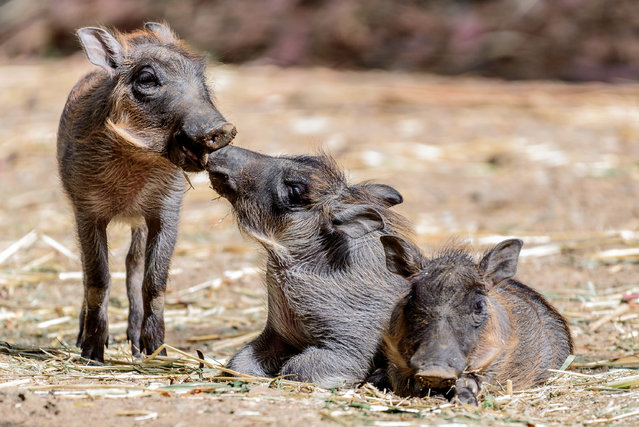 In this June 6, 2016 photo provided by Steven Gotz newly born baby warthogs appear at the Oakland Zoo in Oakland, Calif. Zoo officials say the piglets are beginning to explore their surroundings. (Photo by Steven Gotz Photography via AP Photo) 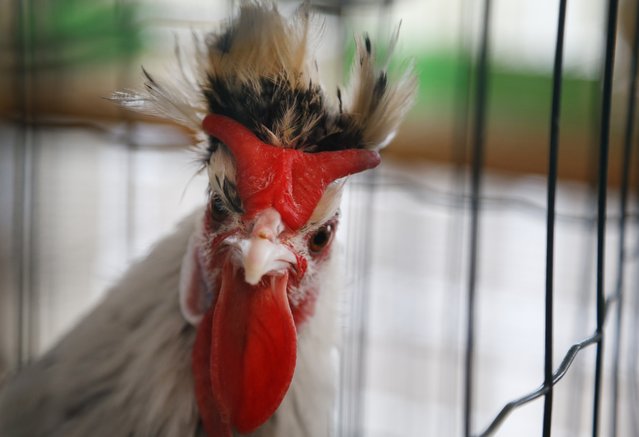 A rooster looks on while sitting in a cage at the International agriculture exhibition “BELAGRO-2016” in Minsk, Belarus, Tuesday, June 7, 2016. (Photo by Sergei Grits/AP Photo) 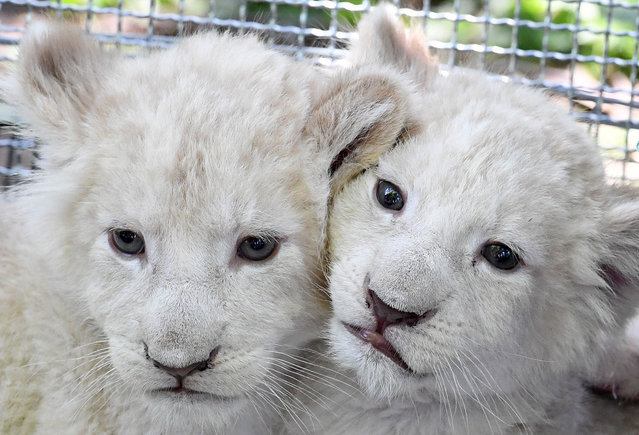 White lion cubs seen at the zoo in Magdeburg, Germany, June 8, 2016. The seven-week-old baby lions weigh more than five kilogrammes each and are reared by hand. White lions are a rare color mutation among African Lions that occurs in nature as well. (Photo by Hendrik Schmidt/ZUMA Press) 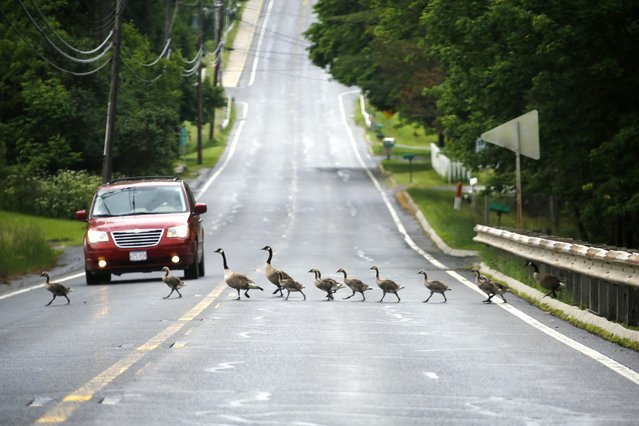 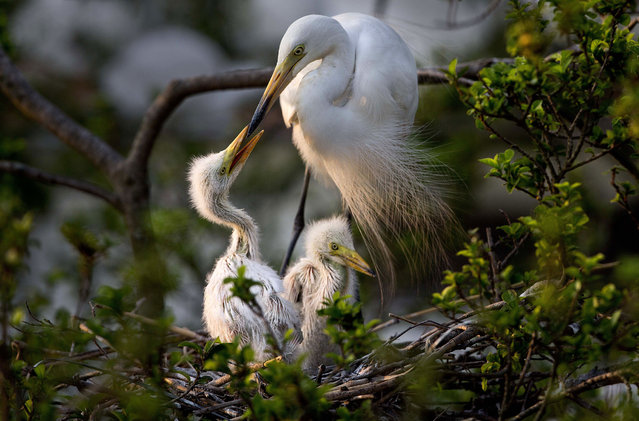 An egret feeds its young sitting on a tree on the banks of river Brahmaputra on the eve of World Environment Day in Gauhati, India, Saturday, June 4, 2016. During this time of the year, hundreds of egrets build their nests in thickly populated trees along the Brahmaputra. The World Environment Day is celebrated on June 5 every year by the United Nations to stimulate global awareness on environmental issues. (Photo by Anupam Nath/AP Photo) 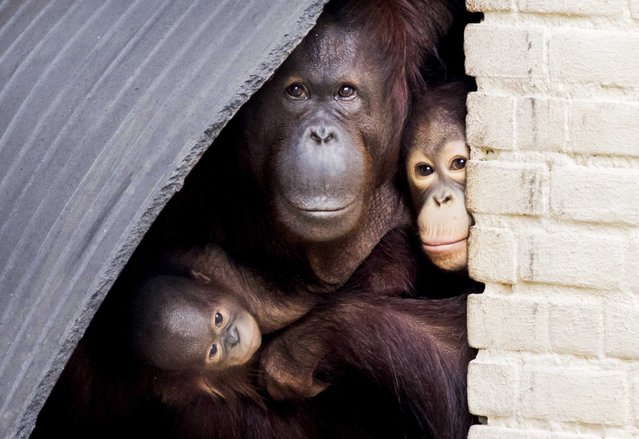 A newborn orangutan prepares to take some of his first steps outside with his mother in Ouwhands Zoo Rhenen, in Rhenen, The Netherlands, 08 June 2016. The baby male orangutan was born on 11 May this year. (Photo by Koen van Weel/EPA) 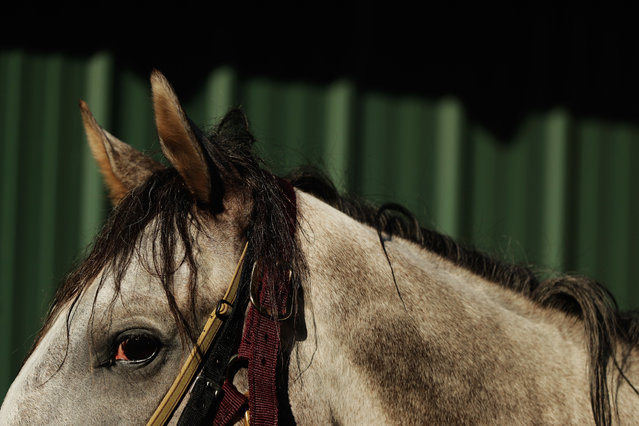