An Indian Greater coucal (Crow Pheasant) – Centropus sinensis – stands on a rockface with a lizard in its mouth at Mandore in Jodhpur on May 11, 2017. (Photo by AFP Photo/Stringer) 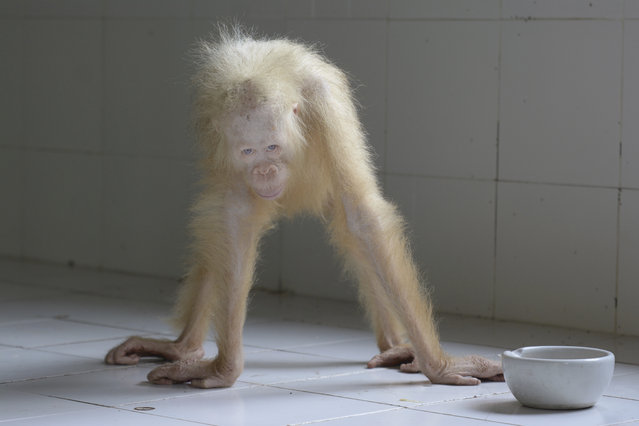 A rare albino orangutan stands in an enclosure at a rehabilitation centre in Nyaru Menteng, Indonesia on May 8, 2017. The Borneo orangutan survival foundation is asking the public to suggest names for the animal, which was rescued from villagers, hoping that it will become an inspiring symbol of efforts to save the critically endangered species. (Photo byIndrayana/BOSF/AP Photo) 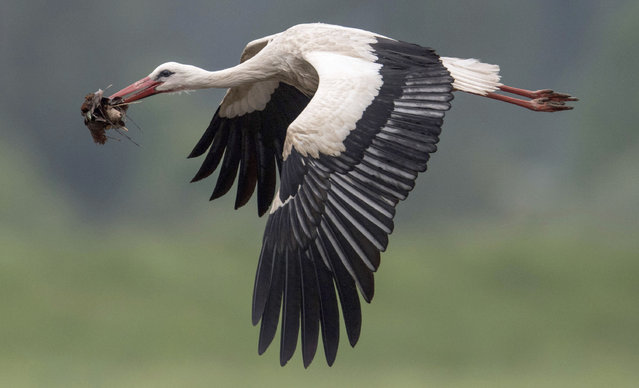 A stork carries materials for a nest in its beak in Biebesheim, central Germany, Monday, May 8, 2017. Newly born stork chicks will start their first flight attempts over the next weeks. (Photo by Boris Roessler/DPA via AP Photo) 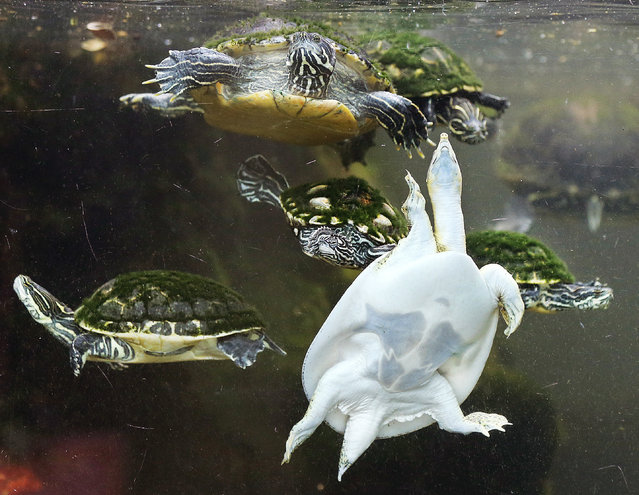 Various types of turtles swim in their pool in the zoo in Frankfurt, Germany, Monday, May 8, 2017. (Photo by Michael Probst/AP Photo) 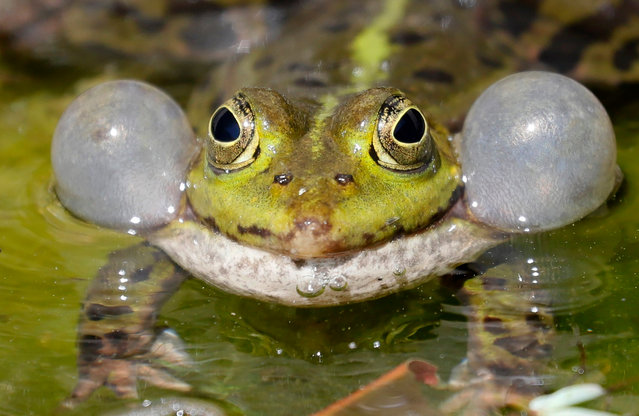 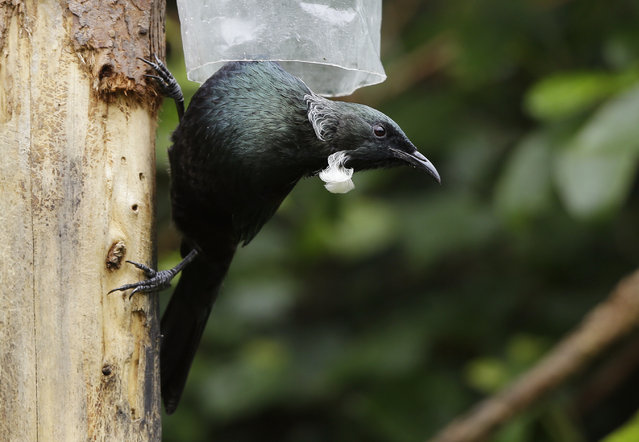 In this March 22, 2017 photo, a tui perches on a tree trunk at a water station at Zealandia in Wellington, New Zealand. People across New Zealand are embracing an environmental goal so ambitious it’s been compared to putting a man on the moon: ridding the entire nation of every last stoat, possum and rat. The idea is to give a second chance to the unusual birds that ruled this South Pacific nation before humans arrived 800 years ago. (Photo by Mark Baker/AP Photo) 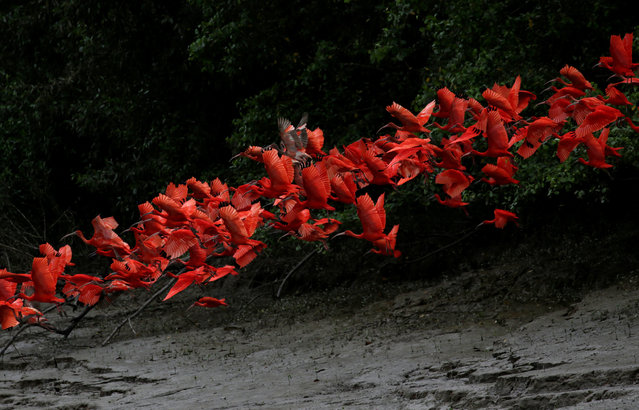 Scarlet ibis fly near the banks of a mangrove swamp located at the mouth of the Calcoene River on the coast of Amapa state, northern Brazil on April 6, 2017. (Photo by Ricardo Moraes/Reuters) 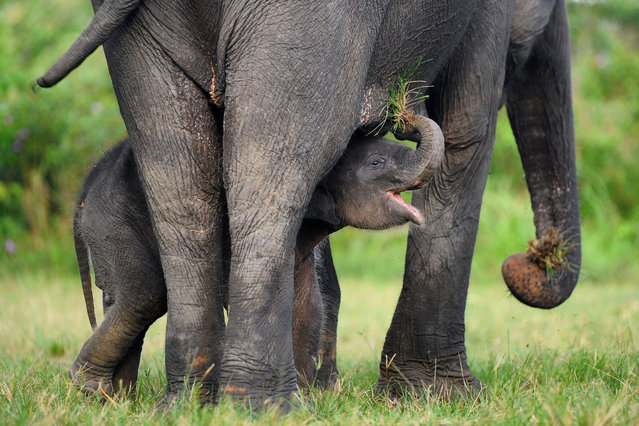 This picture taken on May 10, 2017 shows a baby Sumatran elephant playing with her mother at the Trumon Conservation Response Unit in the Leuser Ecosystem wildlife reservation area in south Aceh district. The baby elephant was born on March 16 in Trumon, a wildlife corridor located in the south of the Leuser Ecosystem, which is experiencing severe threats of encroachment due to its proximity to villages. (Photo by Chaideer Mahyuddin/AFP Photo) 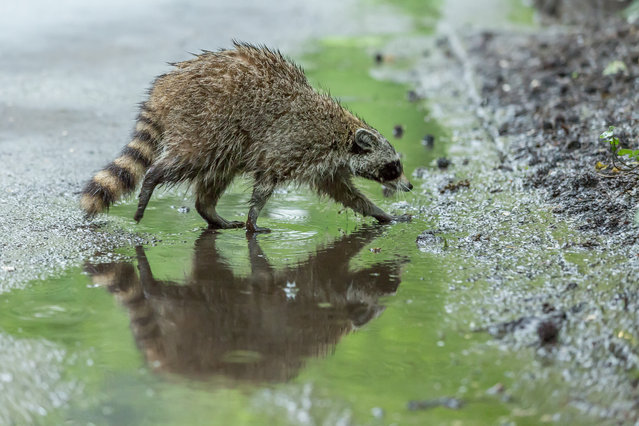 A raccoon navigates Central Park after rainfall on May 7, 2017 in New York City. (Photo by Mark Challender/Barcroft Images) 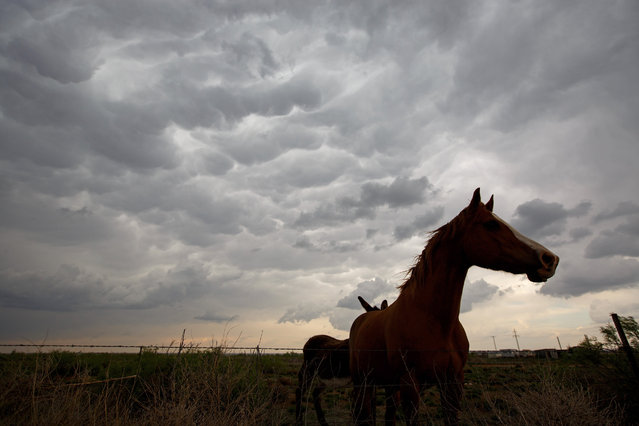 Mammatus clouds, often associated with severe thunderstorms, hover in the sky behind a horse, May 9, 2017 near Clovis, New Mexico. (Photo by Drew Angerer/Getty Images) 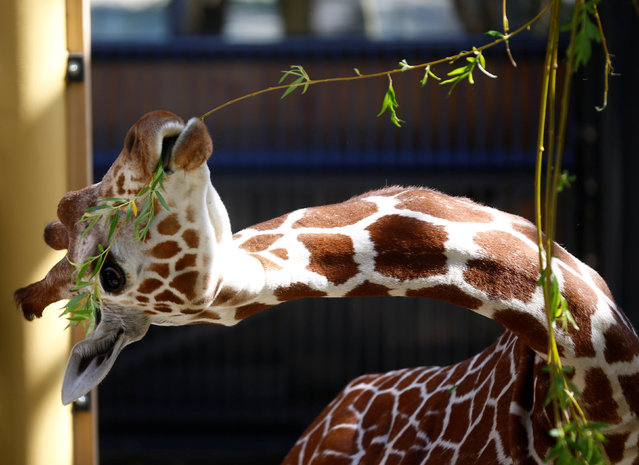 A giraffe grabs some leaves in her new enclosure in Schoenbrunn zoo, Vienna, Austria on May 10, 2017. (Photo by Leonhard Foeger/Reuters) 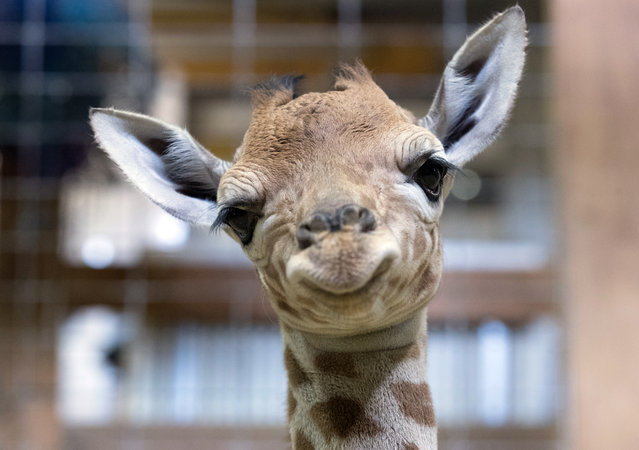 One-day-old baby giraffe calf Gus looks at the camera at Noah's Ark farm on May 12, 2017 in Bristol, England. The baby giraffe was born yesterday at the zoo farm in North Somerset. In the wild, populations of giraffes are suffering from a continuing decline, with 97,500 estimated in Africa in 2015. Since 1985 the total giraffe population has fallen by 35%. New arrival Gus joins brothers George, 4 and Geoffrey, 2. (Photo by Matt Cardy/Getty Images) 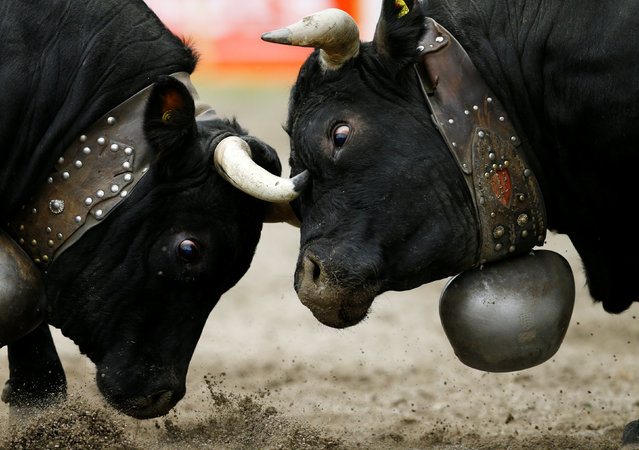 Two Herens cows lock horns during the qualification round of the annual “Battle of the Queens”, a traditional Swiss cow-fighting competition where cows test their strength and fight for the herd's leadership, in Aproz, Switzerland, May 7, 2017. (Photo by Denis Balibouse/Reuters) 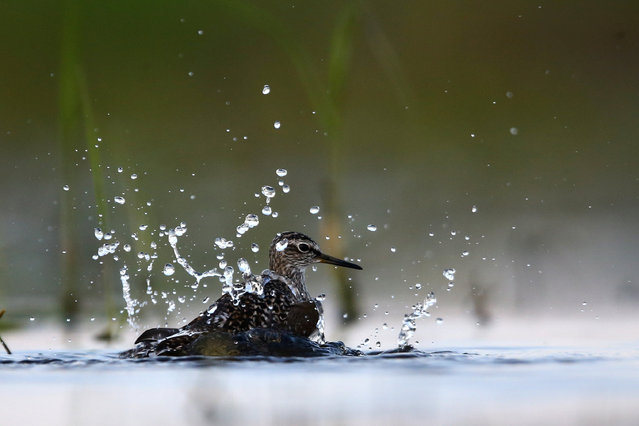 A wood sandpiper bathes on the banks of the Pripyat river, near the town of Turov, Belarus May 7, 2017. (Photo by Vasily Fedosenko/Reuters) 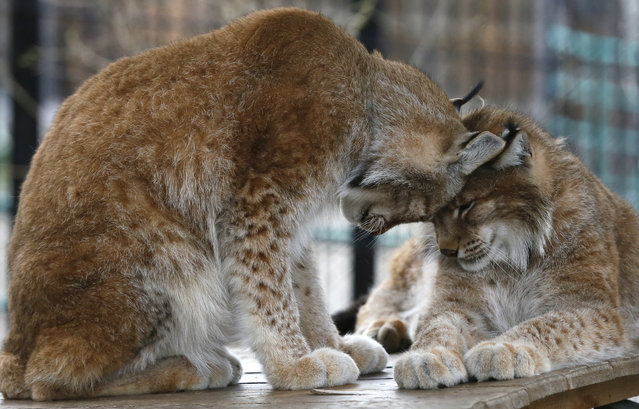 Siberian lynxes Yana (L) and Buran sit inside an open-air cage at the Royev Ruchey zoo in a suburb of the Siberian city of Krasnoyarsk, Russia, May 12, 2017. (Photo by Ilya Naymushin/Reuters) 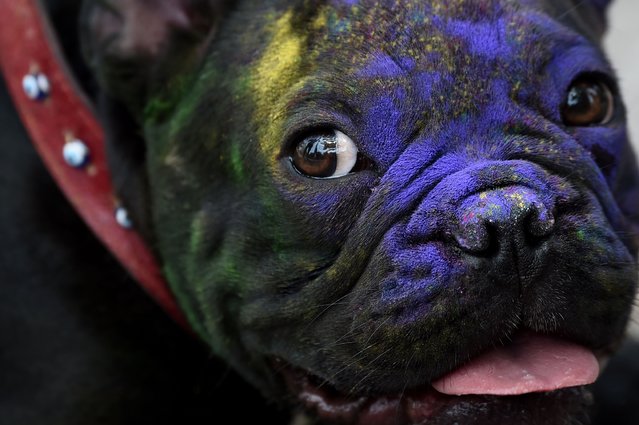 A picture taken on May 7, 2017 shows a dog muzzle coloured with pigments during the Color Festival at Kadikoy district, in Istanbul. (Photo by Ozan Kose/AFP Photo) 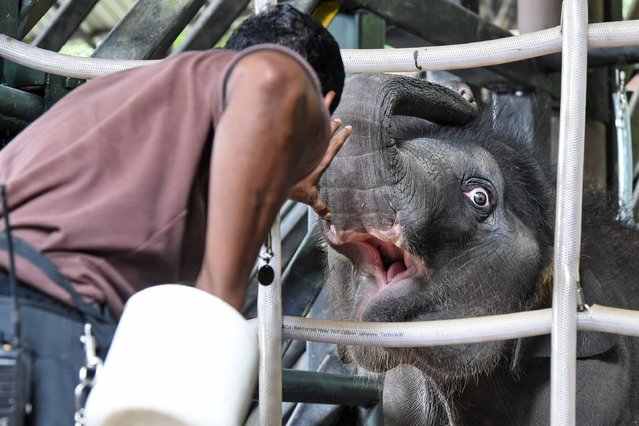 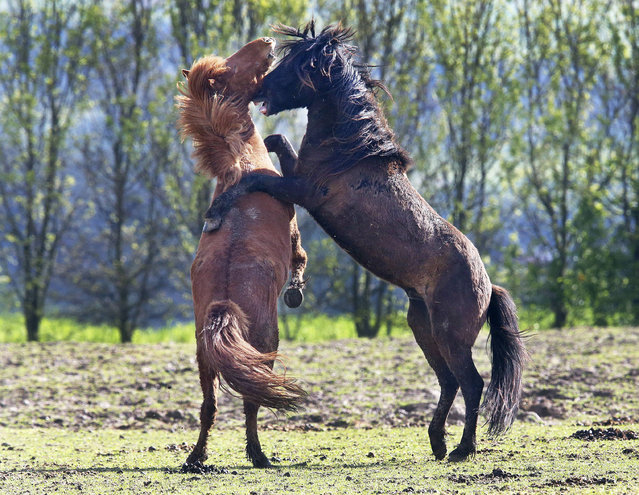