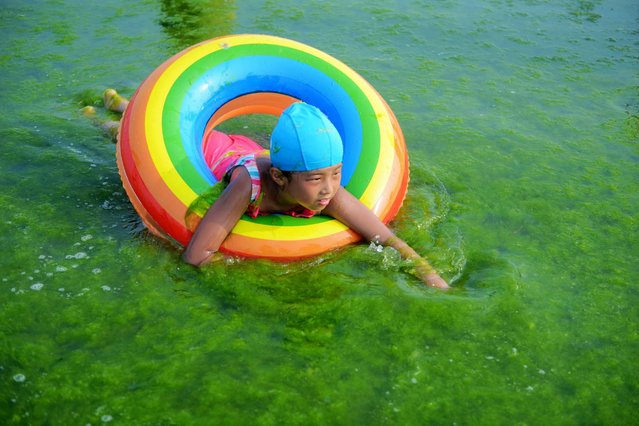 A child plays on sea grass at the beach, July 22, 2016, in Qingdao, China. The thick Ulva Prolifera algae spreads on the beaches each year. (Photo by VCG via Getty Images) 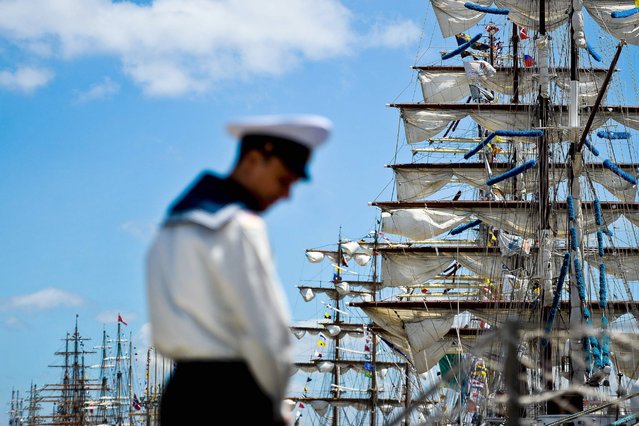 A sailor stands in front of several ships moored at Santa Apolonia dock in Lisbon, July 22, 2016, during the Tall Ships' Races 2016. The international event which brings together sail training Tall Ships for a friendly competition. (Photo by Patricia de Melo Moreira/AFP Photo) 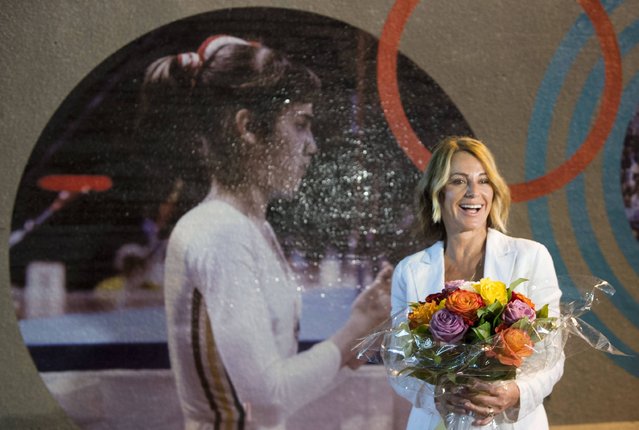 Montreal 1976 Olympics gymnastics champion Nadia Comaneci stands next to a photograph of her competing as she tours an exhibit marking the 40th anniversary of the Olympic Games Thursday, July 21, 2016 in Montreal. (Photo by Paul Chiasson/The Canadian Press via AP Photo) 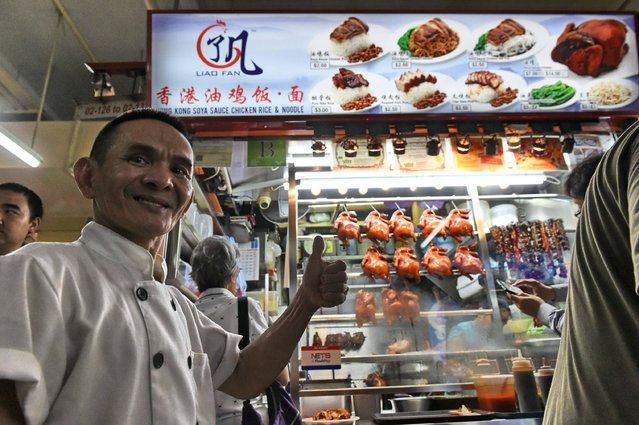 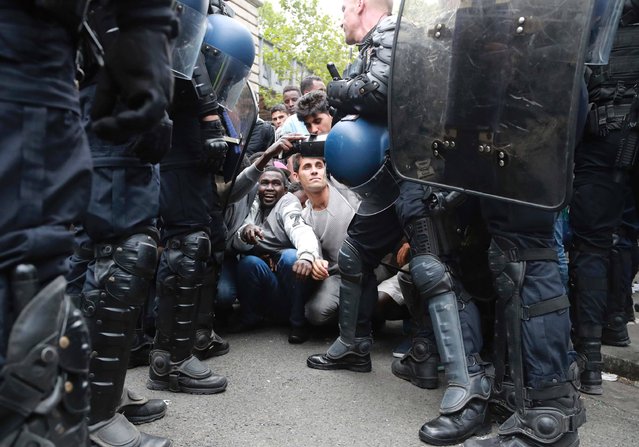 Migrants are evicted from a makeshift camp by French gendarmes, on July 22, 2016 in Paris. Between 1,200 and 1,400 people, mostly men, from Eritrea, Somalia and Afghanistan, were in this camp near the metro stations Jaures and Colonel Fabien. (Photo by Jacques Demarthon/AFP Photo) 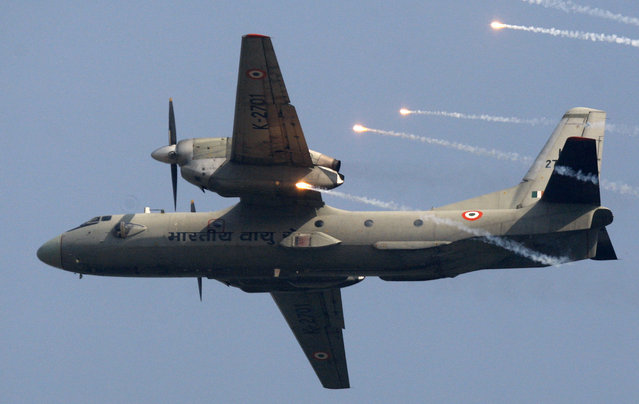 In this Thursday, October 8, 2009, file photo, an Indian Air Force's (IAF) AN-32 transport aircraft releases chaff as it flies past the IAF Day Parade in New Delhi, India. A spokesman for India's defense ministry says the Indian air force has lost contact with a transport plane AN-32 with 29 people on board. A massive search by the air force, navy and coast guard has been launched. (Photo by Mustafa Quraishi/AP Photo) 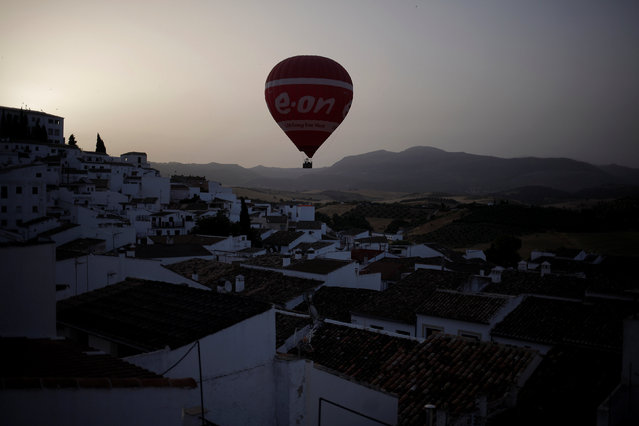 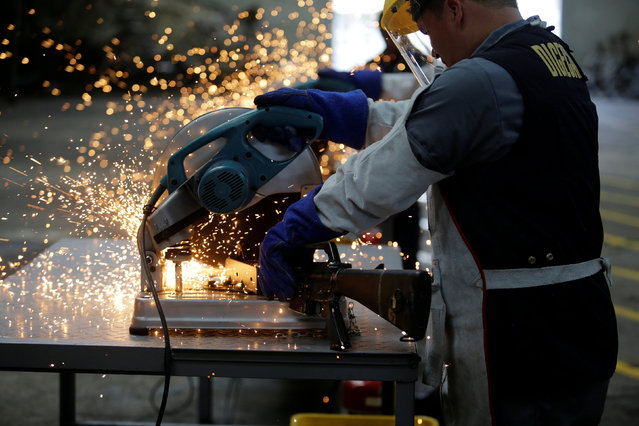 Weapons seized from criminal gangs are destroyed by the authorities of the General Directory of Arms and Ammunition Control (DIGECAM) in Guatemala City, Guatemala, July 21, 2016. (Photo by Saul Martinez/Reuters) 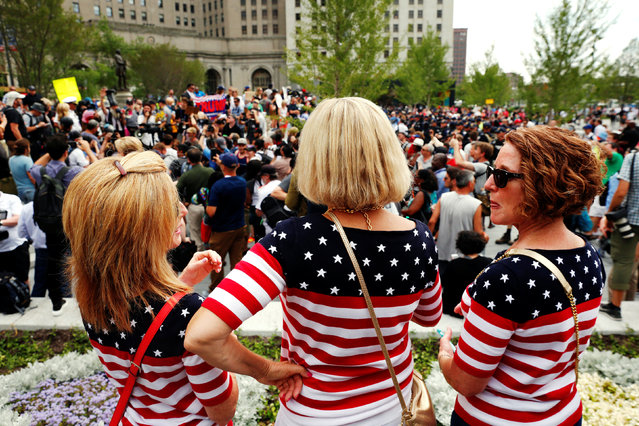 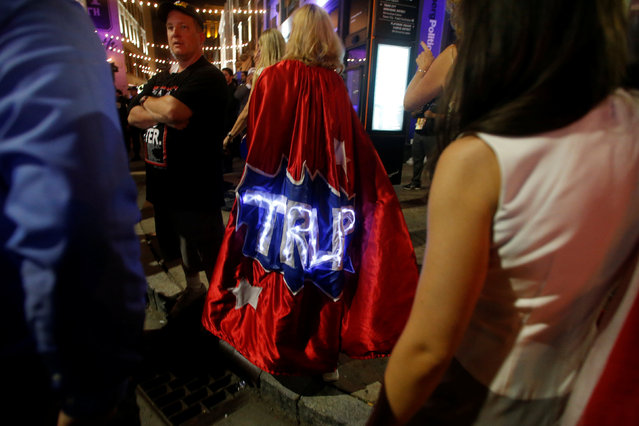 An attendee wearing a Trump cape exits the arena of the Republican National Convention in Cleveland, Ohio, U.S., July 22, 2016. (Photo by Jim Urquhart/Reuters) 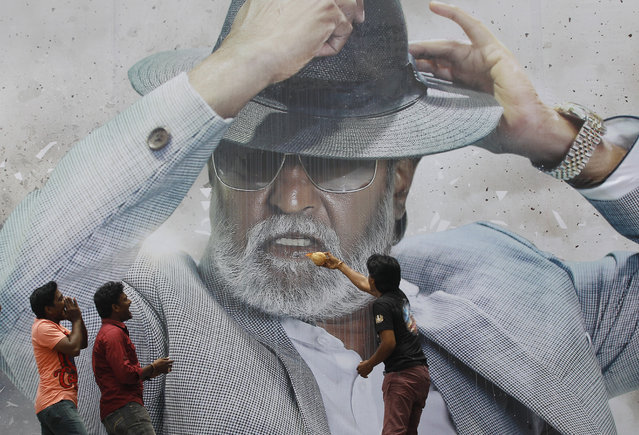 Fans of Indian superstar Rajinikanth offer prayers in front of his poster outside a cinema hall to celebrate the screening of “Kabali” in Chennai, India, Friday, July 22, 2016. Hundreds of thousands of fans of Indian superstar Rajinikanth thronged cinemas across India and Malaysia on Friday for the premiere of his latest film, “Kabali”, jumping from their seats and dancing in the aisles as their hero fought enemies in the gangster flick. (Photo by Aijaz Rahi/AP Photo) 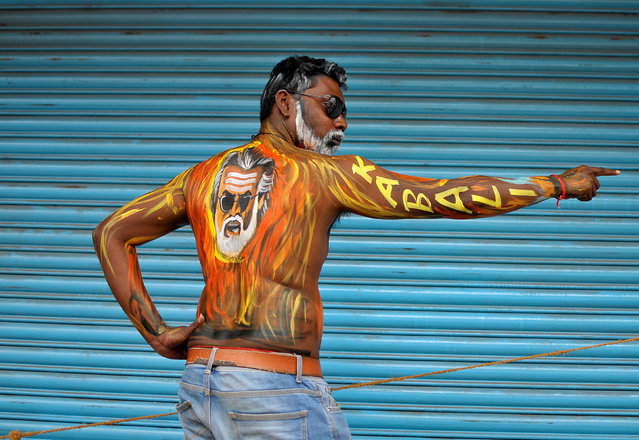 A fan with his body painted with an image of actor Rajinikanth poses outside a movie theatre showcasing the Tamil film “Kabali” in Bengaluru, India, July 22, 2016. (Photo by Abhishek N. Chinnappa/Reuters) 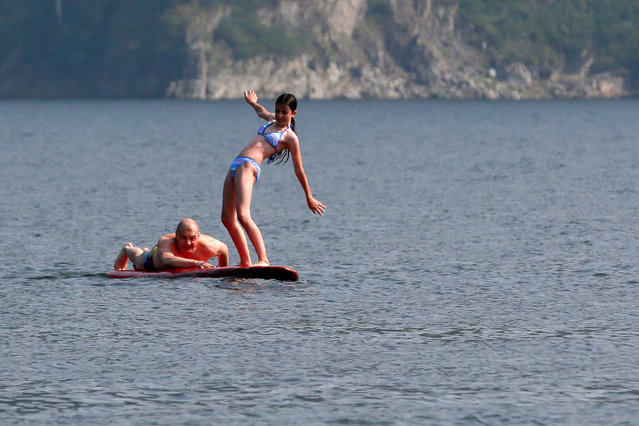 People float on a board along the Yenisei River on a hot summer day in the Siberian Taiga area outside Krasnoyarsk, Russia, July 21, 2016. Picture taken July 21, 2016. (Photo by Ilya Naymushin/Reuters) 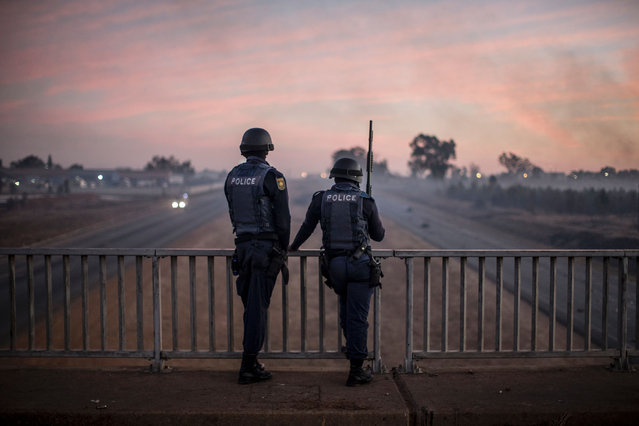 South African anti riot policemen stand guard a bridge on July 21, 2016 as protesters bloc a highway in Meyerton, during a service delivery protest ahead of the August 3rd municipal elections. (Photo by Marco Longari/AFP Photo) 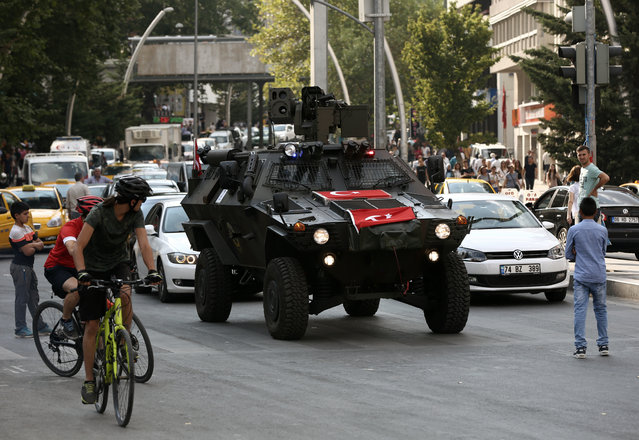 A police APC drives in the city center in Ankara, Turkey, Friday, July 22, 2016. Some Muslim faithful in Ankara welcomed Friday a declaration of a state of emergency by the top authorities, a move that gives President Recep Tayyip Erdogan sweeping powers in ruling the country. (Photo by Burhan Ozbilici/AP Photo) 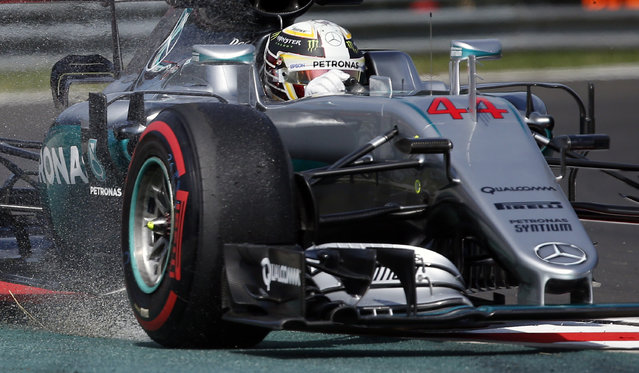 Mercedes driver Lewis Hamilton of Britain steers his car during the first free practice at Hungaroring racetrack near Budapest, Hungary, Friday, July 22, 2016. The Hungarian Formula One Grand Prix will be held on Sunday July, 24. (Photo by Darko Vojinovic/AP Photo) 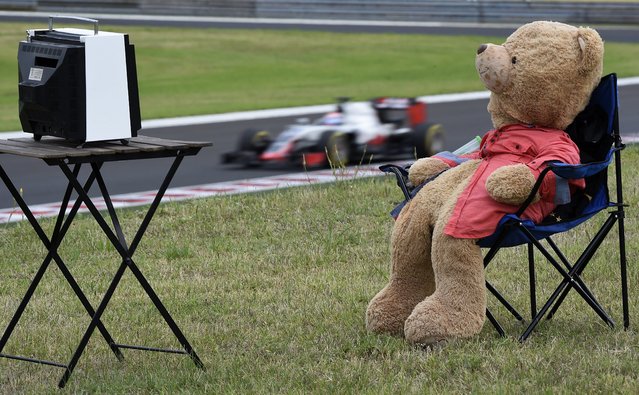 A teddy bear is placed on a chair during the second practice session for Sunday's Formula One Hungary Grand Prix, at the Hungaroring racetrack, in Budapest, Hungary, Friday, July 22, 2016. (Photo by Kovács Tamás/MTI) 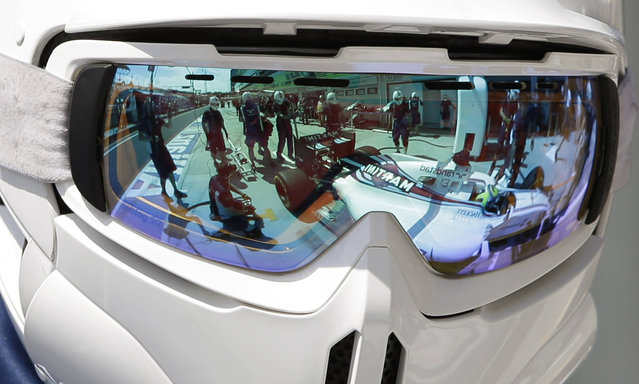 Williams driver Valtteri Bottas of Finland is reflected in the helmet of a Williams mechanic as he gets a pit service during the first free practice, at the Hungaroring racetrack, in Budapest, Hungary, Friday, July 22, 2016. The Hungarian Formula One Grand Prix will be held on Sunday July, 24. (Photo by Luca Bruno/AP Photo) 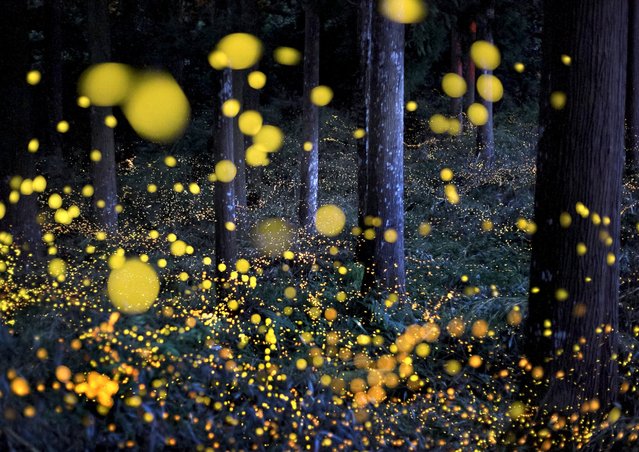 Fireflies dance around a hidden cedar forest deep in the mountains of Japan, July, 22, 2016, in Tamba, Japan. Known as Princess Fireflies, the beautiful insects transform the evening woodland into an enchanted forest, like a scene from a fairytale. (Photo by Nori Yuasa/Solent News/Splash News) 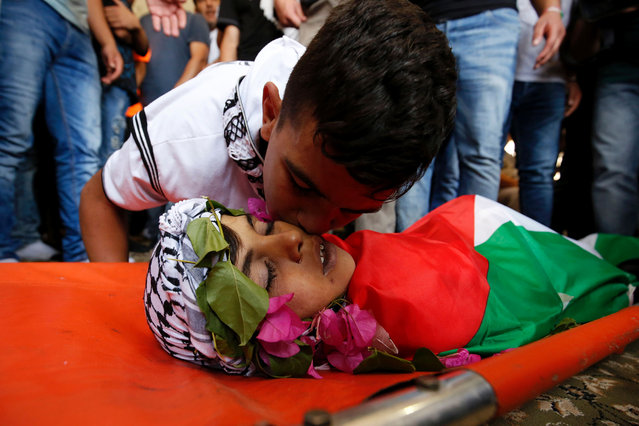 A Palestinian boy bids farewell to 12-year-old Mohiyeh al-Tabakhi, who was killed by Israeli soldiers who fired rubber-coated bullets near Jerusalem the day before, during his funeral in the Palestinian village of al-Ram, between Jerusalem and Ramallah in the Israeli occupied West Bank, on July 20, 2016. The boy was hit in the chest by a rubber-coated bullet which caused cardiac arrest, medical sources were quoted by the Palestinian news agency WAFA as saying. (Photo by Abbas Momani/AFP Photo) 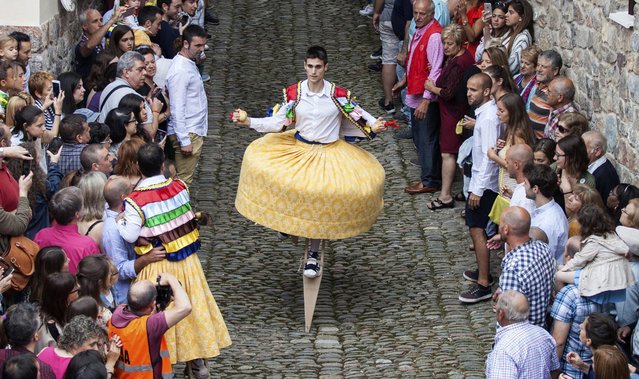 A resident, wearing a traditional costume and walking on stilts, takes part in a “colorful dance” along a slope as part of a festival called “The Anguiano Dancers” in Anguiano, La Rioja, northern Spain, 22 July 2016. A total of eight dancers walked down the street slope turning like human spinning tops on 45-cm-high stilts to worship the town's patron, Mary Magdalene, in a tradition that dates back to 1603. (Photo by Raquel Manzanares/EPA) 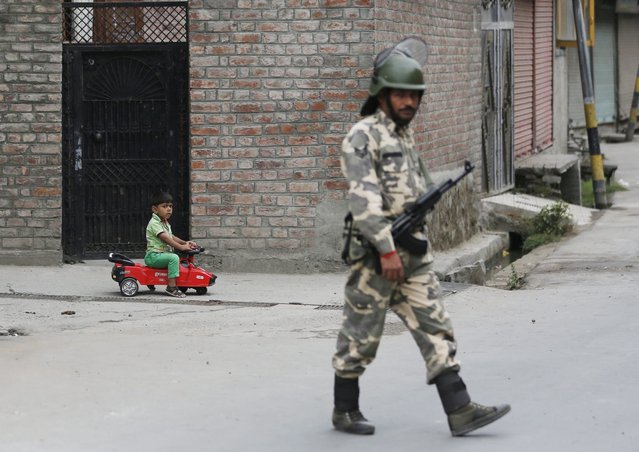 A Kashmiri child rides a toy vehicle as an Indian paramilitary soldier stand guard during a curfew in Srinagar, the summer capital of Indian Kashmir, 22 July 2016. The authorities imposed strict curfew and severe restrictions in most parts of Kashmir valley for the 14th consecutive day to contain protests following the killing of Hizb-ul-Mujahideen commander Burhan Muzaffar Wani. According to officials, the death toll has reached 45 while 2943 civilians have been injured in past 12 days, 1523 have been hit by pellets, 334 grievously-injured have been referred to major hospitals, 340 have been hit by bullets, 640 are injured by tear gas shells, 318 have received critical eye injuries, over 67 have been beaten up by Indian Police and paramilitary forces, four persons have been injured in stampede while 119 are undergoing treatment in hospitals. (Photo by Farooq Khan/EPA) 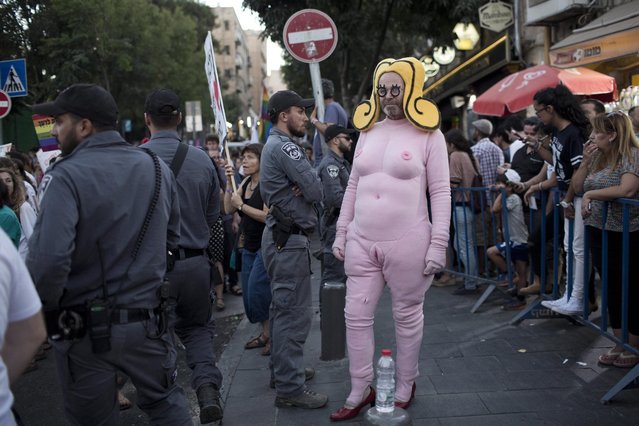 Police stand guard as people march during the annual Gay Pride parade in Jerusalem, Israel, 21 July 2016. Israeli police deployed more than 2,000 officers in the area after last year's Parade in which a 16-year-old Israeli Shira Banki, died after being stabbed by an ultra-Orthodox Jewish man, Yishai Shlissel. (Photo by Abir Sultan/EPA) 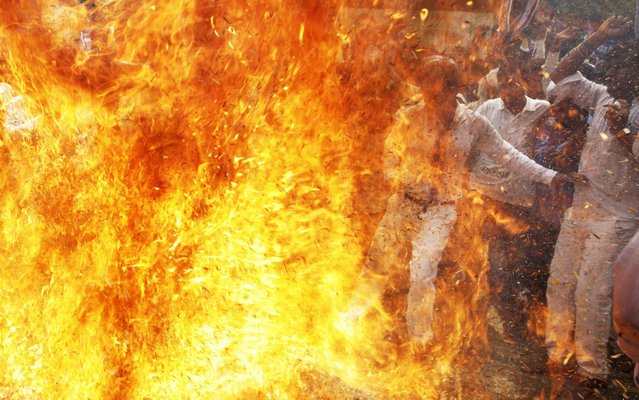 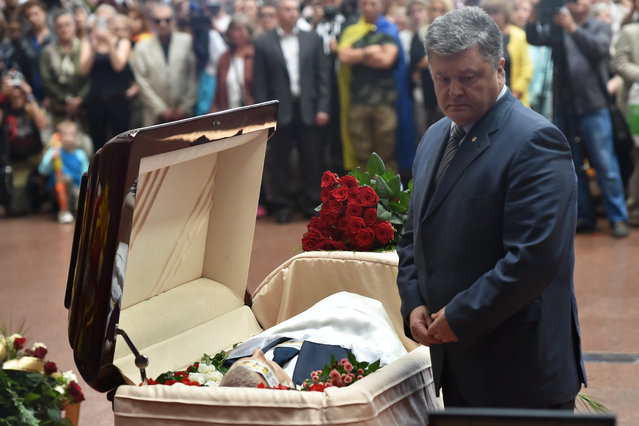 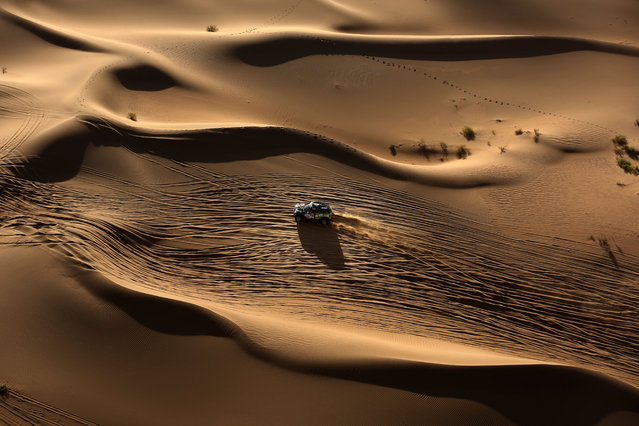 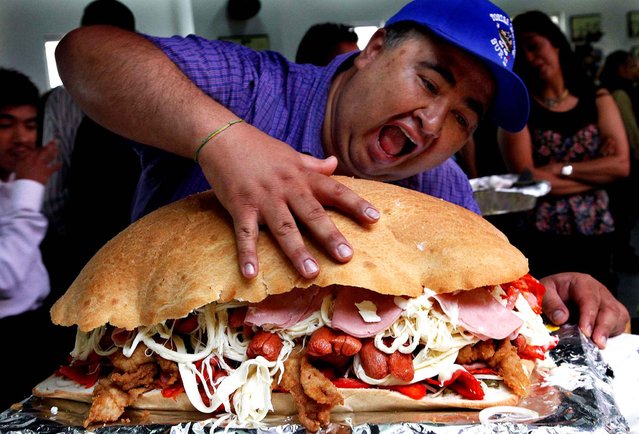 A man strikes a pose in front of a giant torta, or sandwich, during a press conference to promote the 13th annual Torta Festival, in Mexico City, Wednesday, July 20, 2016. The five day festival presents a variety of the Mexican street food made from the most exotic ingredients that include ostrich or stingray, to the classic ham, grilled steak or slow cooked pork. The festival's purpose is to maintain the tradition of eating tortas, and promote the vendors of the Mexican sandwich. (Photo by Marco Ugarte/AP Photo)
Edit Del
23 Jul 2016 13:07:00, post received 0 comments
Publication archive:
←   →
Popular tags:
All tags
Last searches: