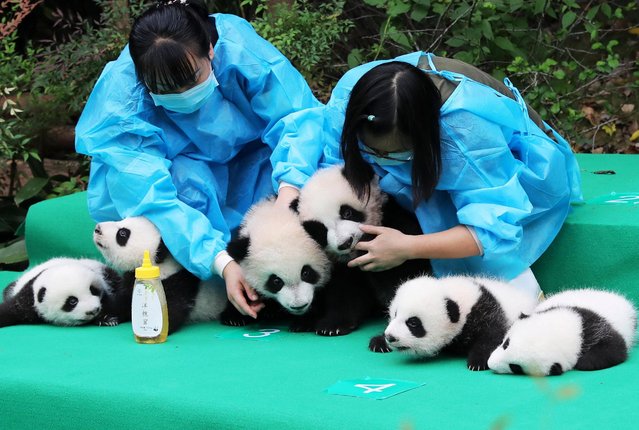 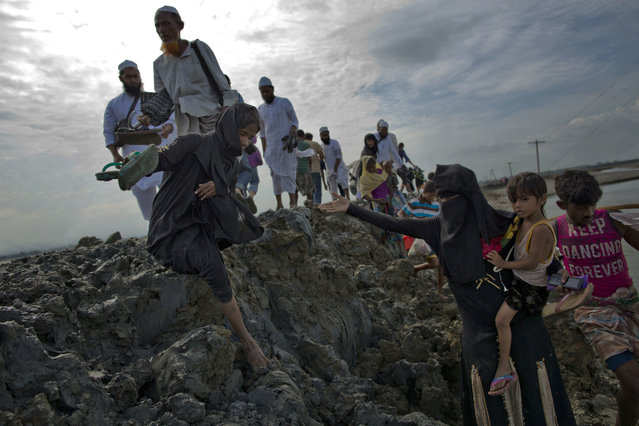 Rohingya Muslims walk towards a camp for refugees after crossing the boder from Myanmar into Bangladesh in Teknaf, Friday, September 29, 2017. More than a month after Myanmar's refugees began spilling across the border, the U.N. says more than half a million have arrived. (Photo by Gemunu Amarasinghe/AP Photo) 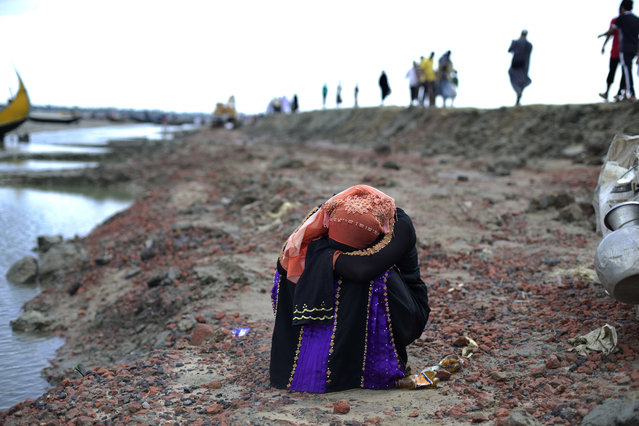 A Rohingya Muslim woman who just crossed the border from Myanmar into Bangladesh puts her head down and cries in Teknaf, Bangladesh, Friday, September 29, 2017. (Photo by Gemunu Amarasinghe/AP Photo) 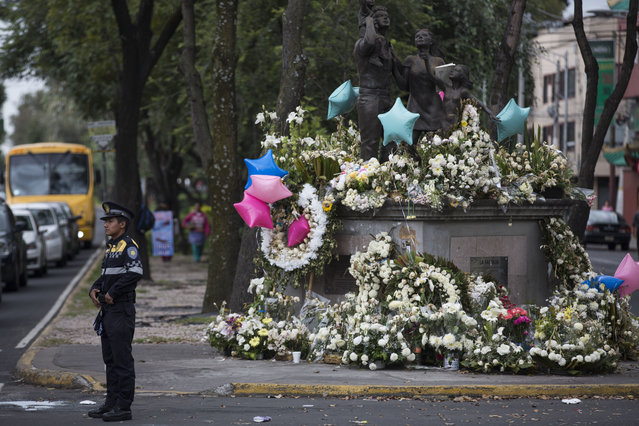 A police officer directs traffic near a memorial honoring 19 children and seven adults who died when a wing of a primary and secondary school collapsed in the recent earthquake, in Mexico City's southern Coapa district, Thursday, September 28, 2017. The memorial is located two blocks away from the Enrique Rebsamen School where according to the Mexican Navy, 11 children were rescued from the rubble. (Photo by Moises Castillo/AP Photo) 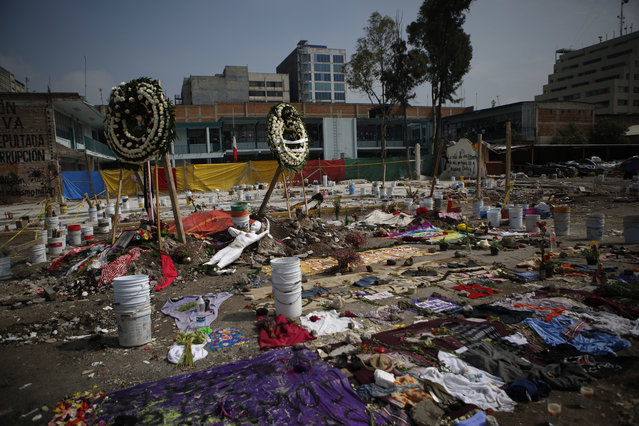 In this Monday, September 25, 2017 photo, flower wreaths, clothing, sewing supplies and a mannequin make up a memorial honoring those who died at 168 Bolivar Street when the five-story office and factory building was felled by an earthquake, in Mexico City. Businesses were located on four floors of offices at the building. Each business had no more than a half-dozen employees and there were likely no more than 50 people believed to be inside the building when the quake struck. (Photo by Rebecca Blackwell/AP Photo) 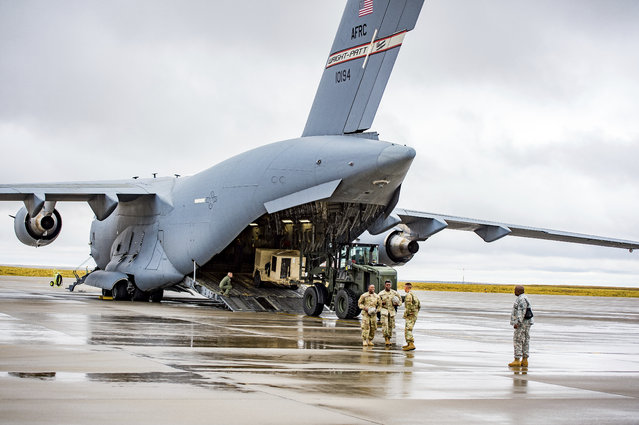 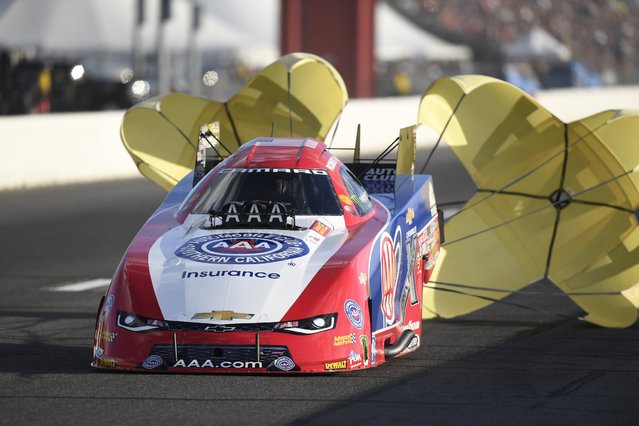 In this photo provided by the NHRA, Robert Hight slows after a run in Funny Car qualifying Friday, September 29,2 017, at the AAA Insurance NHRA Midwest Nationals drag races in Madison, Ill. (Photo by Marc Gewertz/NHRA via AP Photo) 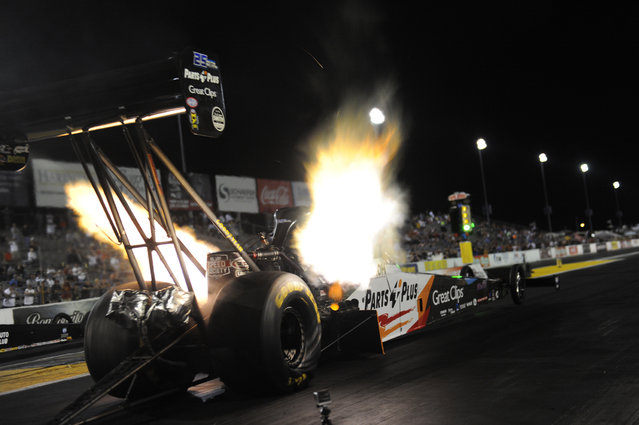 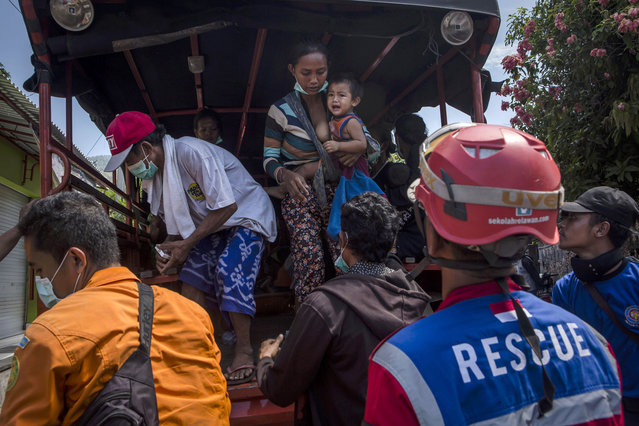 People arrive at temporary shelter after being evacuated from their village at Penuktukan village on September 27, 2017 in Buleleng regency, Island of Bali, Indonesia. Indonesian authorities declared a state of emergency as hundreds of tremors are recorded at Bali's Mount Agung volcano and around 90,000 villagers evacuated their homes. Authorities issued travel warnings for the popular tourist destination and warned Mount Agung has the potential to erupt imminently although flights to Bali and its main tourist areas remain unaffected for now. (Photo by Ulet Ifansasti/Getty Images) 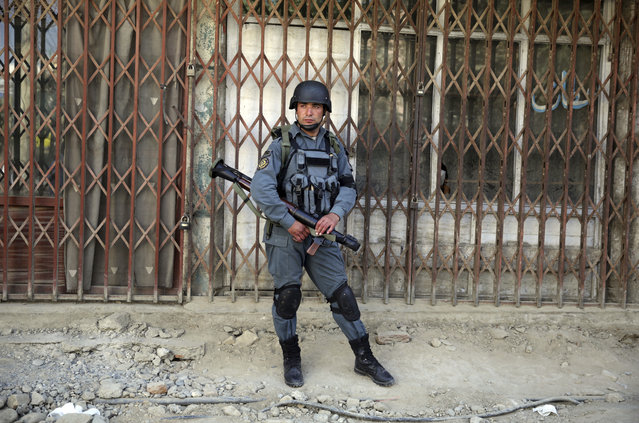 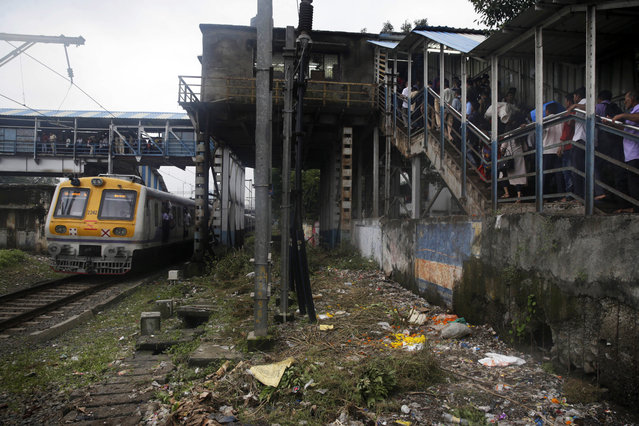 A local train drives past a pedestrian bridge where a stampede occurred earlier in the morning in Mumbai, India, Friday, September 29, 2017. The stampede broke out on a crowded pedestrian bridge connecting two railway stations in Mumbai during the Friday morning rush, killing a number of people police said. (Photo by Rafiq Maqbool/AP Photo) 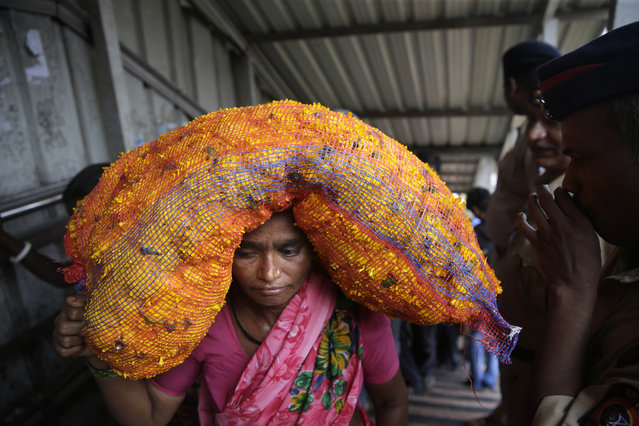 A woman carries a sack of flowers on her head as she walks across a pedestrian bridge where a stampede took place at the Elphinstone station, in Mumbai, India, Friday, September 29, 2017. (Photo by Rafiq Maqbool/AP Photo) 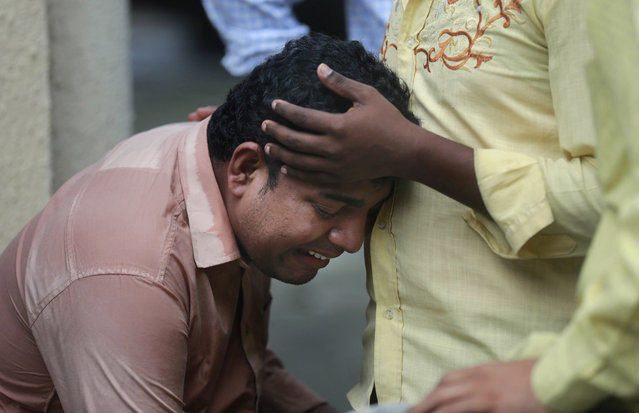 An Indian man mourns outside a morgue for a relative killed in a pedestrian bridge stampede, in Mumbai, India, Friday, September 29, 2017. (Photo by Rafiq Maqbool/AP Photo) 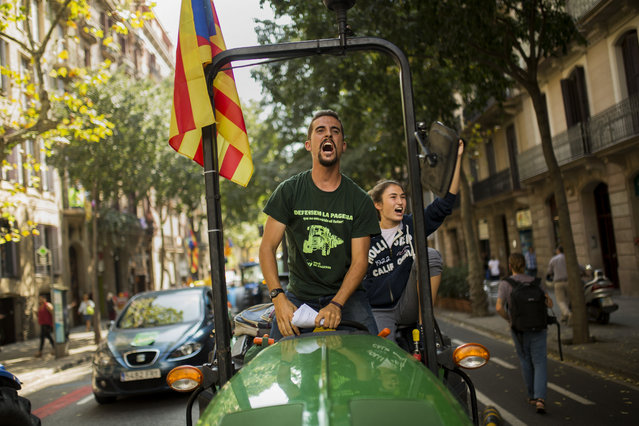 A man with the estelada, or independence flag, shouts slogans as he steers a tractor during a protest by farmers in Barcelona, Friday, September 29, 2017. Authorities in Catalonia aim to ensure that a disputed referendum on independence from Spain will take place peacefully on Sunday despite a crackdown on the vote by the national government, the region's interior chief said. The small placard read: “Freedom”. (Photo by Francisco Seco/AP Photo) 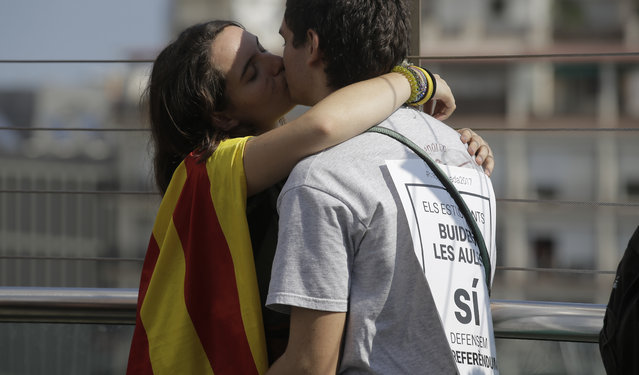 A couple kisses during a protest regarding the referendum in Barcelona, Spain, Thursday, September 28, 2017. Thousands of striking university students are marching through Barcelona to protest an intensifying central government crackdown on Sunday's planned independence referendum in Catalonia. (Photo by Manu Fernandez/AP Photo) 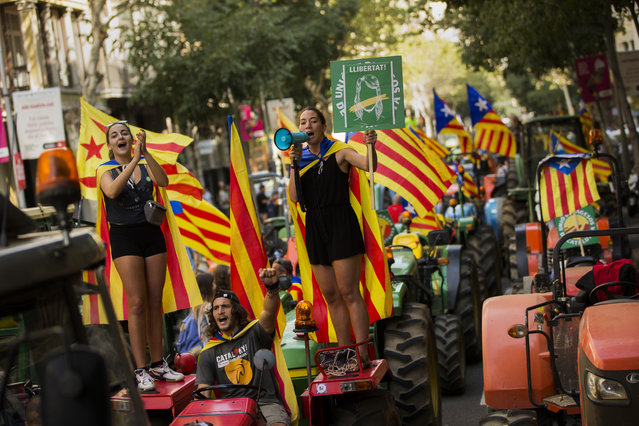 People with the estelada, or independence flags, shout slogans on top of parked tractors during a protest by farmers in Barcelona, Friday, September 29, 2017. (Photo by Francisco Seco/AP Photo) 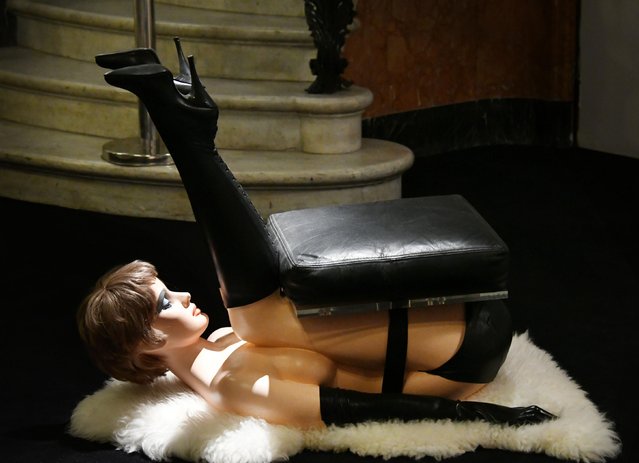